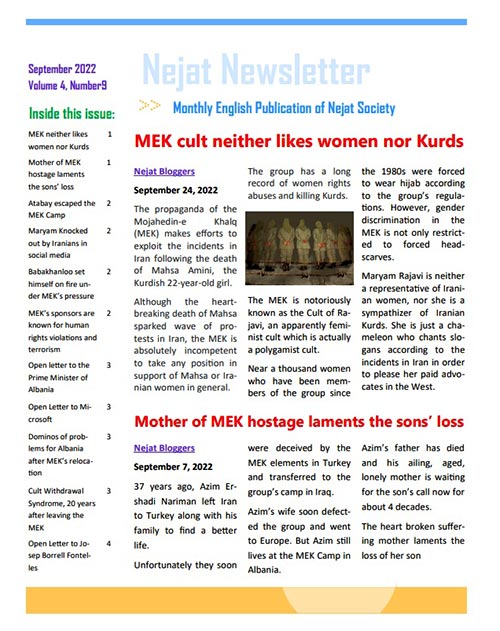 The propaganda of the Mojahedin-e Khalq (MEK) makes efforts to exploit the incidents in Iran following the death of Mahsa Amini, the Kurdish 22-year-old girl. Although the heartbreaking death of Mahsa sparked wave of protests in Iran, the MEK is absolutely incompetent to take any position in support of Mahsa or Iranian women in general.

37 years ago, Azim Ershadi Nariman left Iran to Turkey along with his family to find a better life. Unfortunately they soon were deceived by the MEK elements in Turkey and transferred to the group’s camp in Iraq.

– Maryam Rajavi Knocked out by Iranians in social media

The death of the young Iranian Kurdish woman, Mahsa Amini, after she was arrested by the Iranian morality Police was heartbreaking and was followed by waves of protests across the country.

– Babakhanloo set himself on fire under MEK’s cult-like pressure

Mohammad Reza Babakhanloo is a name which has been listed as a victim of the Mojahedin-e Khalq by numerous former members of the group. The most recent testimony on the heartbreaking death of Mohammad Reza was given by a defector of the group Jaber Taee Semiromi (nicknamed Arash).

– MEK’s sponsors are known for human rights violations and terrorism

Robert Fantina, the university professor, human rights activist, political commentator and journalist from Canada writes extensively about US foreign policy and the Middle East, which focus on Palestine.

The process of affairs in Albania does not seem very favorable from the point of view of political and national security. The story of tensions started when the presence of a destructive mind-control cult called the MEK was imposed on Albania, and these tensions intensified when this organization directed subversive and terrorist activities inside Iran from the territory of Albania,

– Dominos of problems for Albania after MEK’s relocation

According to cult experts, former members of cults show a distinctive psychological syndrome which is attributable to psychologically deleterious practices in cults. This is called cult withdrawal syndrome.

You are aware of the tensions and challenges between the governments of Albania and Iran these days. We try to stay away from political issues and focus on our human rights goals only. But the type of work and our aims require us not to be indifferent to the political changes in Albania, which are very worrying for the families.

From: Olsi Jazexhi and Gjergji Thanasi, To: Microsoft Security
Threat Intelligence, Your anonymous analyst has alluded that the latest cyber-attack against Albania was carried out by Iran. While we are not cyber experts, in your analysis we were impressed by your enterance where you say that: “The attackers were observed operating outside Iran”