According to reports ,Akbari Nasab family are trying in Baghdad to return the body of their son Yaser who last year died in Ashraf prison and his death was announced as self- immolation.

Reza Akbari Nasab the oldest brother who is now in Baghdad ,went to Ashraf yesterday asked for visiting his other brother “ Morteza” and his other son” Musa”. The visit was arranged with the presence of some authorities of MKO without Musa.

According to Reza Akbari, his brother who couldn’t talk in a free atmosphere due to the presence of his commandants started to insult his older brother.  “I didn’t receive the medical documents of my nephew’s death so I suspend his death” Reza Akbari Nasab told the reporters. He also asked the Iraqi authorities to assist him to transfer his nephew’s body to Iran. 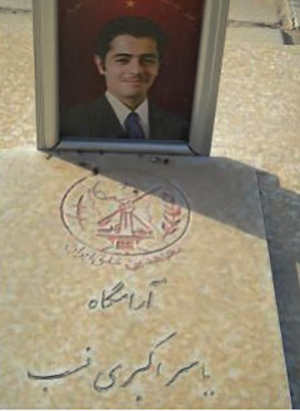 The following is piece written by Mr. Reza Akbari Nasab:

First of all I have to explain that: My brother “Morteza” left Tehran in 1985, to join the MEK in Iraq. We had no

news from them for years. In 1990 we found out that his wife has died in “Eternal Light” operation. Their three children “Fatemeh”, ”Yaser” and “Musa” were separated from father following the strange “Ideological Revolution” and were sent to Germany where they were held in a camp.

Unfortunately the misfortunes didn’t end with our family and due to the manipulations, Morteza called his sons to come to the desert (Ashraf) and the consequence was the death of Yaser last summer.

Apparently he killed himself in a suicide but the bizarre thing is that the organization kept everything silent with no news of such an event.  Just after the defectors published the news on their websites, the MKO became forced to confirm the news and contrary to their usual process, they didn’t hold any ceremony for his death and tried to make every thing forgotten. A dear friend from America sent me an email and asked forget the issue and look for consoling my family.

Time passed and we were going to forget Yaser until my mother asked me to go to Iraq and try to get news of Morteza and Musa. Finally I could come to Iraq in Feb 3rd, 2008 and I went to American Camp in Ashraf and asked for meeting my brother and his son, I also asked them to let me go to my nephew’s tomb and see the documents of his death. The American officials told me to tell my request to MEK authorities. During the hours I was waiting for my beloved ones the American soldiers and officials hosted me in a courteous manner.

I was enjoying the friendly atmosphere of American camp which had decreased the pressure on me when a man carrying a file came over shouting at me: “why have you come here?” He was speaking Persian angrily so I didn’t recognize him. But he was no one except my kind and lovely brother, Morteza! He was carrying a file that he said that they were my writings on the death of Yaser. He actually threatened me that he would hand them to the Americans since I had written some polite critics against the American officials. I told him sympathetically: “you may be right but let‘s have a short talk which is something normal in any political organization’’.

But he didn’t accept and he even didn’t let me get closer than 3 meters. My former kind brother insulted me in front of American soldiers. My nephew Musa didn’t get the permission to visit me since he is a German citizen and Mujahedin were afraid.

The Americans didn’t answer my questions simply and to answer my claim that the MKO members are manipulated they just said that it’s not their responsibility! They didn’t let me visit the tomb of Yaser either. I expected more of the American democracy. While leaving, I told the American lieutenant: ‘’you are developing a new Al-Qaida.” Recently I have received important news: that the members of Ashraf are not allowed to visit Yaser’s tomb.

Here’s a question: if Yaser has self-immolated, because the Americans treated him badly! Why is his tomb forbidden? Maybe the real thing is that our young boy was killed and then burned! There is also other news on the assassination of Yaser which will be proved by the struggle of benevolent people.  Bagdad- Winter 2008.