No cult begins unless lead by a charismatic religious or political entrepreneur and hardly a cult can survive following the death of its charismatic founder unless succeeded by another charismatic successor. A charismatic leader does not appear in a vacuum and is in part the product of a larger social or political trend. To build a hierarchical authority with him atop, a charismatic leader claims divinity or special knowledge and demands unquestioning obedience and devotion from the followers.  Doubting or questioning the leader’s authority is not at all tolerated and the leader may be aided by one or more core of leaders.

The guru in a cult plays the key role to lead and influence the followers. In 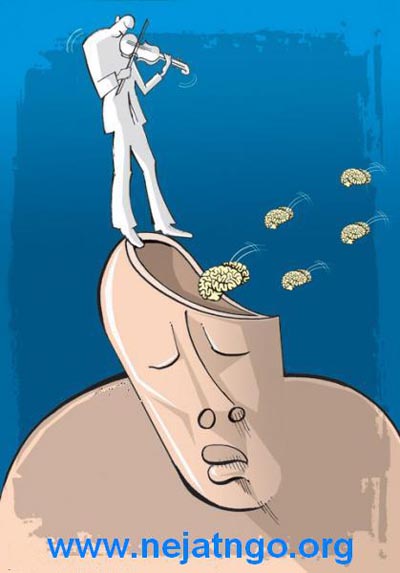 fact, the process of brainwashing in a cult can be carried out within a structure of an absolute charismatic authority. Besides, in facing the outsiders, the built courage within the insiders originates out of the charismatic impact of the guru before whom they cringe and bow. Thus, first the recruits have to be convinced to put all trust in the leader before anything else and as Singer analyses:

Legend has it that all cult leaders are charismatic. In reality, charisma is less important than skills of persuasion and the ability to manipulate others. In order to start a group, a leader has to have ways of convincing others to follow him or her, and such leaders tend not to relinquish their control. Cult leadership can be a heady role when the leader comes to see the amount of control he or she holds and how easily he or she can influence followers. 1

Unquestionably, the spirit of self-sacrifice within a cult is fostered by devotion and absolute faith in a leader. As a result, the first step following the entry of a new recruit is to build in him/her a sense of devotion to a specific and exceptional sanctity or exemplary character by whose authority instructions or orders are revealed or ordained:

Day one is usually devoted to demonstrating the leader’s absolute authority. The leader, often called a facilitator or trainer, immediately takes control of the setting with a demeanor that suggests he is a powerful, in-charge person and no one is to challenge what he says. “This program works,” the trainer proclaims. “It’s all up to you to obey and get the maximum benefits.” He remains totally in charge, acts knowledgeable, and is practiced in verbal skills, so that he never loses an encounter. Anyone who challenges the trainer will be humiliated and verbally mashed. 2

The idea is strongly infused into the members and, going through the totalitarian authority of Mojahedin-e Khalq Organization or the cult of Mojahedin’s leadership, one can easily notice the cult-like leadership in its most excessive practice in the group. The complexity of leadership relations within MKO requires a study of its own which comes in the category of a variety of phases. There are also differences in the hegemonic styles in each phase as the members’ impression of the leader changed continually as each phase came to engage the organization in a different enterprise according to circumstances. In any case, it was the hegemonic authority of the leadership that compelled the members to take on ventures that were doomed to failure from the very beginning and no logic advocate them. Explaining the authoritative relationship between the leader and the followers in a cult Hoffer states:

It is somewhat terrifying to realize that the totalitarian leaders of our day, in recognizing this source of desperate courage, made use of it not only to steel the spirit of their followers but also to break the spirit of their opponents. In his purges of the old Bolshevik leaders, Stalin succeeded in turning proud and brave men into cringing cowards by depriving them of any possibility of identification with the party they had served all their lives and with the Russian masses. 3

Notwithstanding the deception and cult manipulation within MKO, Rajavi’s authoritative leadership has played a totally influential role in the nature of converting a political group into a destructive cult of personality. Rajavi’s hegemonic leadership can be discussed in two aspects; a) employing leadership absolutism to subjugate high-ranking members and b) to deploy the relationship between the charismatic authority and followers to establish an organizational leadership hegemony entailing absolute devotion.

1-  Thaler Singer, Margaret; Cults in Our Midst: The Continuing Fight Against Their Hidden Menace, introduction..