about Camp Ashraf by Anne Singleton 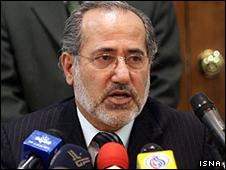 was consolidated from various locales in Iraq and protected by US forces at Camp Ashraf in Diyala province; a bizarre anomaly in Iraqi and coalition efforts to bring unity and peace to the country. The Government of Iraq has long regarded the MEK as a foreign terrorist group which continues to threaten internal security and is culpable for aiding Saddam Hussein in the violent suppression of Kurdish and Shia uprisings in 1991. Successive announcements in 2008 by President Jalal Talabani and Foreign Minister Hoshyar Zebari made clear their government’s determination to expel all the MEK members as soon as possible.

But solving the conundrum as to why the group has been protected and promoted by western interests for all this time has become clearer since January this year when responsibility for Camp Ashraf was handed over to the Government of Iraq by the Coalition Forces. As the Government of Iraq has moved swiftly to fulfil its decision to expel members of the MEK from the country, so the protests by those who have a stake in the continued presence of the group have intensified.

During March, three debates were held in the UK parliament by members supporting the MEK. In spite of being on the US terrorism list since 1997, CBS and CNN news channels have broadcast MEK films showing its personnel obstructing Iraqi authorities as they try to perform their duties. Additionally, the Washington Post has quoted an MEK spokesman in which he is threatening the Government of Iraq that “a human catastrophe" will follow further action.

Even though Europe and the UK have un-proscribed the group as it claims to no longer believe in violence, no moves have been made to have European and British citizens and those with residency rights removed from Camp Ashraf to safety. Instead, powerful lobbies who have used the MEK for their own interests are continuing their efforts to force the Government of Iraq to maintain the infrastructure of a terrorist organisation in its country. Keeping the group in Iraq can only serve the interests of those Saddamists who still believe the group will give them leverage over the Government of Iraq.

Over several months Dr. al Rubaie has fielded criticisms and attacks with repeated assurances that the residents of Camp Ashraf will be treated according to international human rights standards and that none would be forcibly repatriated. To date, nothing has occurred at Camp Ashraf to give any cause for concern to human rights organisations. In recent weeks two MEK members departed Camp Ashraf voluntarily. One confessed that he had been instructed to commit suicide in order to implicate Iraq’s Army. These two men, who were protected and comfortably accommodated by the Iraqi Government under observation by the ICRC and the Iraqi Ministry of Human Rights, spoke openly of the human rights violations perpetrated by the leaders on MEK members. It was partly in response to this information that Dr. al Rubaie has focused efforts to protect the individuals inside the camp.

Indeed Dr. al Rubaie’s plan for the difficult task of dismantling an extremist cult has revealed an enlightened, humanitarian approach which could become a blueprint for tackling similar organisations worldwide.

However, as the clamour continues, I asked Dr. al Rubaie for an interview in order to further clarify his Government’s approach to events at Camp Ashraf.

Anne Singleton: You want to move the residents from Camp Ashraf for their own protection, yet the MEK commanders say they must remain in Camp Ashraf. What do you think motivates them?

Mowaffak al Rubaie: The self-appointed leaders at Camp Ashraf will have to speak for themselves. What I will address is how the residents of Camp Ashraf have cooperated or not cooperated with the policies and decisions of the Government of Iraq. The GOI does not deal with the MEK as an organization. We deal with the residents as individuals. The GOI has informed them that as members of a foreign terrorist organization they cannot remain in Iraq and must choose whether to return to their country of citizenship or some other country. Remaining in Iraq is not an option. The GOI has taken steps to assure their security while beginning to exercise sovereignty at Camp Ashraf as we do in every other part of our country. Ashraf is not above the law. Any infractions of Iraqi law will be handled by the GOI authorities with attention to due process and humanitarian standards. To date, the residents of Camp Ashraf have created a series of obstacles to the legitimate exercise of sovereignty by the GOI and this will not be tolerated. They must cooperate in order to avoid obstructing our authorities carrying out their legitimate duties.

AS: Some observers speculate that MEK leader Massoud Rajavi is in the anti-nuclear bunker inside Camp Ashraf and that is why the commanders refuse to move. Do you think this is possible?

MR: We do not know exactly what is within the bounds of Camp Ashraf. The GOI has informed the residents that we will diligently and progressively examine all areas of Ashraf to ensure there is no contraband, that there are no illegal activities taking place, and that they must cooperate with this legitimate exercise of Iraqi sovereignty and enforcement of the rule of law.

AS: You have spoken of ‘detoxifying’ the people in Camp Ashraf. Could you explain what this means and why you feel it is necessary? What do you hope to achieve?

MR: As you know from observing the behavior of the MEK and from their history, this is an indoctrinated and tightly disciplined organization of extremist zealots who have employed terrorism and at times even self-immolation to secure their aims. In normal everyday language we can say that they have been "brainwashed". As is common in organizations of this type, the indoctrination and discipline rely on the continuous pressure of their leaders and the total control by them of their environment. Therefore, individuals have little ability to exercise their free will because they exist in this closed environment and fear for personal reprisals if they are discovered to have deviated from the approved line of responses. As we strive to determine from each individual where they wish to go since they cannot remain in Iraq, we are conducting individual surveys and a census which are open to oversight by the ICRC and the UN. We believe that if we can separate individuals from the all-encompassing domination by their leaders, we can allow them to begin to exercise their rights as individuals and make appropriate choices. That is, we hope to remove them from the toxic effects of their indoctrination and leaders.

AS: CBS and CNN have been broadcasting clips showing women shouting at and insulting Iraqi soldiers from behind closed gates. Could tell us more about what these scenes depict.

MR: You will have to ask CBS and CNN when and under what circumstances they obtained their filmed scenes. What I can tell you is that the Iraqi Army unit posted to defend and secure Camp Ashraf has been in full control since 20 February and has exercised patience and extreme restraint in spite of the staged provocations and demonstrations that Ashraf’s self-appointed leaders have launched in defiance of the legitimate exercise by the GOI of its sovereignty.

AS: Families are concerned about having access to their relatives without MEK minders being present. Do you see a time in the near future that such visits can be facilitated?

MR: The GOI has already facilitated visits by families and has provided the residents of Camp Ashraf written procedures which are fully permissive. Our security forces at Camp Ashraf have and will continue to facilitate legitimate family visits with no interference by either the MEK or anyone else. These visits are also completely open to ICRC and UN observation. The MEK have been the obstacle to establishing a comfortable facility for such family visits.

AS: The MEK claim that the Government of Iraq has not allowed medical personnel or medical supplies into the camp and that this has resulted in the deaths of some women and that others are dying. They want ICRC and UNHCR intervention. What is your response to this allegation?

MR: These allegations are false and baseless.

AS: The MEK’s supporters have paid millions in legal fees to have the group removed from the UK and European Council terrorism lists. Have any of the group’s western supporters offered to help remove these people to their countries?

AS: In your view, what can the UK, European and other western governments do to help resettle the MEK?

MR: These governments can agree to allow their citizens and others who have status in their country to return.

AS: The Washington Post quoted MEK member Mohammad Mohaddessin clearly threatening that self-immolations similar to 2003 and other suicide acts would be performed by the residents of Camp Ashraf. What is your response to this?

MR: We have and will continue to treat the residents of Camp Ashraf humanely and in accordance with Iraqi law and international law and conventions. We will not initiate acts of violence against them. We do expect them to cooperate in our efforts to exercise our sovereignty according to the rule of law. Should they choose extremist acts such as self-immolation, it will be their decision which we would regret.