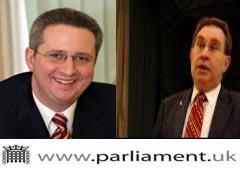 To ask the Secretary of State for Foreign and Commonwealth Affairs what recent reports he has received on the detention of 36 Camp Ashraf residents without charge or trial by Iraqi forces; and if he will make a statement.

Ivan Lewis (Minister of State (Foreign and Commonwealth Affairs), Foreign & Commonwealth Office; Bury South, Labour)
The Iraqi Government have given assurances that no Camp Ashraf residents would be forcibly transferred to a country where they have reason to fear persecution, or where substantial grounds exist to believe they would be tortured.

All 36 arrested on 28 July 2009 were released on 7 October 2009 and have returned to Camp Ashraf. The Iraqi authorities have said they intend to resettle all 36 to other countries once suitable arrangements are in place. They had been detained under a combination of charges related to the violence at the camp on 28 July 2009 and immigration violations.

Our ambassador in Baghdad met the Iraqi Human Rights Minister on 6 October 2009 to discuss the detention of the 36. He was briefed on the efforts underway to make arrangements for their release.

During their detention our embassy in Baghdad was in regular contact with the Iraqi authorities, the UN Assistance Mission in Iraq and the International Committee of the Red Cross (ICRC). The UN confirmed that they have been held in acceptable local conditions. Food and water was available throughout, but the 36 men chose to follow a hunger strike in protest at their detention. Medical care was provided during their detention. The 36 had regular access to the ICRC.
House of Parliament, London, October 13, 2009