Al Khalis, Iraq, November 04, 2009 – Eight families (named below) travelled to Iraq from Iran this week to find and meet with their relatives who are trapped in a terrorist cult. Once again American soldiers, apparently acting as lackeys for the MKO leaders in Camp Ashraf, have blocked all attempts of these families to meet their loved ones.

Efforts by the Iraqi authorities, U.N. representatives, the ICRC and others to facilitate the humanitarian move have been blocked by the Americans.

Although Iraqi police have established a base inside Camp Ashraf in an effort to enforce Iraqi law among the residents there, the American soldiers have established a further buffer checkpoint which effectively prevents them from carrying out this duty. 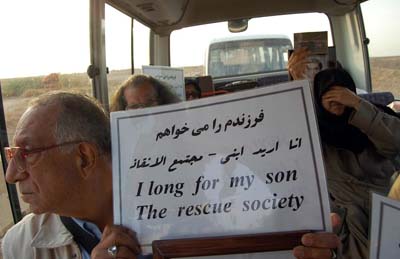 Families who arrived at the camp on Saturday 31 October were able to pass through the Iraqi checkpoints to the camp, but were blocked at the final checkpoint which is manned by U.S. military personnel.

The families are now staying at the first check point and an Iraqi officer is acting as liaison between them and the camp. The US army is apparently resisting the requests of the families and insists that the Iraqis should ask permission from the MKO leaders to let families see their loved ones. The MKO is not only an illegal foreign terrorist group in Iraq but has since 1997 been on the U.S. terrorism list. 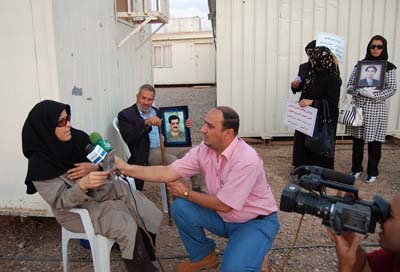 From November 2 the families began a hunger strike. They demand that the Iraqi government as the only responsible body in Iraq must take charge and allow the freedom of their children.

The Iraqi government’s attempts to dismantle the terrorist camp and release the victims has been facing strong resistance from the Israeli lobby and neocons who support the return of Saddamists to Iraq. The Mojahedin Khalq Organisation has acted as their proxy in Iraq with Camp Ashraf being used as the base for gathering and coordinating the Saddamists after the American Invasion of Iraq in 2003. By order of the Pentagon, the camp was protected and held together by the U.S. until their retreat in 2008. Americans left a unit at the camp to make sure the terrorist HQ is not dismantled by the new Iraqi government.

The MKO leaders, with the backing of the U.S. army, refuse to accept families meeting their children. They say the families are “agents of the Iranian secret services” and have refused even to hand over the letters the families have written to their children.

1- Mr. Jahanshir Sassani – looking for his son Mohammad Ali Sassani . Mohammad Ali was a P.O.W. during the time of Saddam’s war with Iran. He was handed over to the MKO during the war in defiance of international law. He has been in Iraq for 21 years. This is Mr. Sassani’s fourth visit to Iraq to try to meet with his son.

2- Mr. Reza Noroozi – looking for his son Abdolmajid Nooozi. Abdolmajid was a P.O.W. during the time of Saddam’s war with Iran. He was handed over to the MKO during the war in defiance of international law. He has been in Iraq for 22 years.

3- Mr. Akbar Moradi Rizi – looking for his brother Hossein Moradi Rizi. Hossien has been in cult isolation for the past 30 years.

4- Mrs. Nasreen Lotfizadeh – looking for her daughter Soosan Banihashemi. Soosan has been in cult isolation for the past 21 years.

5- Mrs. Parvin Saberi – looking for her brother Aghil Saberi. Aghil has been in cult isolation for the past 16 years.

6- Mrs. Giti Zartoshtnia – looking for her son Roozbeh Attaee (aka: Ali Mahdavi). Roozbeh has been in cult isolation for the past 10 years.

7- Mrs. Masoumeh Mahboob – looking for her husband Arzil Dialeh and sons Mohsen and Peyman Dialeh. They have been in cult isolation for the past 7 years.