The Reality of National Council of Resistance

The establishment of National Council of Resistance aka NCR/NCRI in 1981, in France by five Iranian Opposition groups was part of the consequences of Islamic Revolution in 1979 when some individuals and groups broke out with the regime founded by Ayatollah Khomeini. 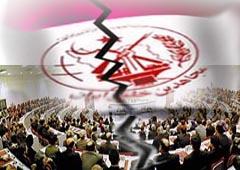 The main objective of such a council of which the biggest member was Mujahedin Khalq Organization, was to achieve political power in Iran. The agenda of the primary members was to propagandize their so-called council as the "only alternative" to the regime of Tehran, although Abul Hassan BaniSadr had left it because of MKO’s relations with the fighting enemy against Iran: Iraq.

The other opposition groups who were members of NCR also defected from the council since they saw the principal axis they had based their coalition on was being violated by MKO whose leader, Massoud Rajavi was taking the most undemocratic steps against his own nation by cooperating with Iraqi Baath regime. On the other hand, a more important factor of NCR’s decline was that MEK was not playing the role of an ally but it was considering itself as the main element of the council. So Rajavi tried to spread his hegemony on the other members of the council (who were from various political movements or ideologies) and his reactionary ideology which was not based on democracy.

National Council of Resistance, under the leadership of Massoud Rajavi became a destructive political power which disappointed those who were once deceived by its founders.
After the extensive process of defection from NCR, those who stayed was just some trivial figures [who were mostly burned cards of regime of Shah) and their mission was to run MEK’s medieval ideology. Thus MEK could never ally with democratic, progressive movements. That might explain that the only objective they founded NCR for was to create an instrument to achieve its goal that was reaching political power in Iran based on a cult of personality.

Since then NCRI has become a puppet of MEK that has been determined to overthrow Islamic Republic in six month! (For thirty years on)