Statement of the gathering in Paris

With faith in the generosity of people, with the aim of rejecting all kinds of violence, terrorism and 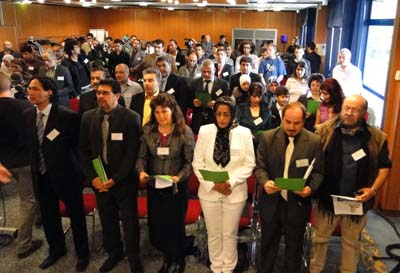 cultish behaviours and with the aim of helping the families of the victims of Rajavi cult in Camp Ashraf – Iraq, more than 200 human rights activities are participating in this gathering on the 19th of June 2010 in Paris.

No doubt, in the present circumstances, Iranian society inside and outside the country is in need of peace and awareness more than ever. We see it as our duty to create an atmosphere in which these could be achieved and therefore we reject all kinds of violent ideologies as well as all kinds of cultish beliefs. We believe that dialogue and interaction between different ideas could and should be the way forward. The people gathered here include human rights groups and activists, experts in cults and anti terrorism, as well as families of the victims who have joined us in this gathering.

As the majority of the participants in this gathering are ex members of Mojahedin Khalq Organisation, the following statement is designed to be the focal point for the future co-operation between the signatories as well.

1- We believe that the Mojahedin Khalq Organisation led by Mr. Massoud Rajavi and Mrs. Maryam Rajavi during the past three decades with their insistence on the two parameters of Ideology and Military, have changed the organisation in to a religious-terrorist cult. The brainwashing of the members is aimed at diminishing any resistance to the lifetime leadership of Rajavi and his wife Maryam. The leader of the cult was engaged in mercenary work for Saddam Hussein, the former dictator of Iraq, and in return Saddam allowed the leadership and members of Mojahedin Khalq to be transferred to Iraq where the leadership had all the tools needed to suppress the critics in the known atmosphere of Saddam’s era. Massoud Rajavi and Maryam Rajavi tortured their critics in solitary confinement and if this would not lead to the desired result and the resistance against them persisted, then in co-operation with the Secret Services of Saddam’s regime they would send their victims to the prisons of Iraq, one of which was the infamous Abu Ghraib prison, from where ten surviving inmates (ex MKO members) are available here to testify in any international court.

2- Massoud and Maryam Rajavi, in order to deceive and legitimise their activities and to garner support for the Mojahedin Khalq Organisation, portray themselves s the only democratic alternative to the Iranian regime. This is an organisation which, according to an overwhelming number of European diplomats working in Iran, enjoys no support among the people inside Iran. We ask all international policy makers and politicians and governments not to use such terrorists as Massoud and Maryam Rajavi as tools for short term benefits. This is no more than giving ransom to terrorists when practically all the people of Iran have complaints against them.

3- We the supporters and signatories to this statement warn that after the fall of Saddam Hussein, the leaders and high ranking members of the Mojahedin Khalq have escaped to European countries, taking with them whatever money and documents were given to them by the fallen regime before its collapse. They are using known faces in European parliaments as lobbyists to whitewash their history of terrorism and long-lasting cooperation with Saddam’s dictatorship, and either reject the abundant documents available or to try to legitimise them with excuses. The ideological, organisational, financial and military relation between the MEK and the Baath Party of Saddam is not a secret. Films and documents of the joint criminal activities of Rajavi and Saddam are available and presentable to any court.

4- We announce our support for the French government’s correct move on 17th June 2003 that resulted in the arrest of Maryam Rajavi and over 160 high ranking members of this terrorist cult. We also denounce and deplore the order by the leadership of the cult which ended in self-immolation of some cult members in the streets of Paris in June 2003. We thank the foreign minister of France Mr. Kouchner for his stance against terrorism and announcing this group to be a terrorist group. We ask the French Judiciary to expedite consideration of the complaint files filed by the victims of the Mojahedin Khalq against the leaders of the cult

5- We support the Iraqi government in its attempt to remove the Mojahedin Khalq forces from their country and deplore the various plots of the MEK leadership to prevent the Iraqi government from carrying out its responsibilities; plots which have already resulted in the death of some members. The responsibility for the outcome of such plots, which aim to prevent the transfer of members to wherever they want to go, is solely on the shoulders of the leaders of the cult.

6- Maryam Rajavi who resides in Auvers-sur-Oise in France is working on the concept of keeping the structure of the terrorist cult intact if and when the Iraqi government does remove the MEK forces from Iraq. She wants to have the whole organisation transferred intact to one of the European countries, most probably France or one of the Scandinavian countries. She is planning to re-start her terrorist activities from this new HQ in the heart of Europe. We, the participants of this seminar warn that the presence of the Mojahedin Khalq terrorist organisation is a serious threat to the safety of the people in European countries.

7- The participants in this seminar believe that many victims of Rajavi cult in Ashraf camp once they are freed will need psychological care and attention as they have been exposed to very long term psychological manipulation. For this reason we ask the ICRC, UNHCR, Médecins Sans Frontières, etc to visit and interview every one of the captives separately and evaluate their situation and needs.

8- We condemn the continuous harassment, character assassination and physical attacks carried out by the Mojahedin Khalq Organisation on the direct order of Massoud and Maryam Rajavi in Europe against ex members and critics of the cult as well as Iranians abroad who ask simple questions from the leadership of this organisation.

9- We believe that political and social struggle can not and should not undermine humanitarian feelings and family bonds. Therefore we ask the Mojahedin Khalq leaders to respect these feelings and let the families of those captive in Camp Ashraf visit their loved ones without the presence and harassment of cult leaders. We also call on these leaders to cancel the order of ‘no marriage’ inside the Mojahedin Khalq immediately.

10- Concerning the above paragraph, we ask the governments of Iraq, the US and European governments to become more active concerning the situation of the people trapped in Camp Ashraf by the Mojahedin Khalq leaders; to take more responsibility and act to secure the minimum of human rights, including the right of family visits, right to access to news and media and the right of choosing their future.

At the end we announce to the families of the victims picketing in front of camp Ashraf who have been trying to visit their loved ones for the last four months:

1- Your loved ones are our brothers and sisters. We have suffered alongside these people for years and surely we will stand with you until the day that they are released.

2- We assure you that all the interviews and whatever you hear from them on tapes are made under direct pressure of the organisation and we assure you that their hearts beat for you and that it is only your unconditional family love that can overcome the effects of these pressures.

3- We will do our best to bring your voice to the attention of international society and we adore your resilience and patience.

4- We are as aware as you are about the threats posed to the residents of camp Ashraf. We are afraid of what may possibly happen and will try our best to prevent it by bringing it to the attention of the outside world. We also ask you to neutralise these treats by your presence and vigilance.
On behalf of the Signatories

Who are the terrorists?