On 25 July 1988, only days after Iran-Iraq governments accepted the UN Security Council Resolution 598 that called for a cease fire in the eight-year long war, Mojahedin Khalq 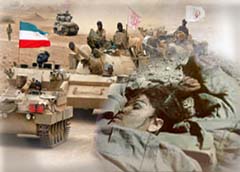 Organization (MKO, MEK, PMOI, NCR, NLA) launched its major military invasion onto the Iranian borders. Supported by Iraqi army and its air cover, Rajavi dispatched his estimated 7000 forces National Liberation Army (NLA) to demonstrate his organization’s military potentiality in a four-day lasted operation, the great ”Operation Eternal Light” as the organization called it and the organization’s irreversible suicide operation as many critics referred to it. Although presumed to be a part of Iran-Iraq war, the operation was the most disastrous venture by an organization whose strategy of struggle was mainly built on militarism and terrorism.

In its unclassified 1992 report on the organization, the State Department refers to the operation as an explicit evidence of MKO’s armed struggle and close collaboration with Saddam’s regime.

The group launched its most significant incursion in June and July 1988, when they coordinated an advance into Iran with Iraqi forces. During the same offensive, Iraqi units in other sectors of the front used chemical weapons against Iran. NLA units briefly seized the Iranian border towns of Mehran, Karand, and Islamabad-e Gharb. The Mojahedin claimed to have killed 40,000 Iranians, but other military observers said the, NLA "just got wiped out" when Iranian reinforcements arrived.

MKO’s Eternal Light withstood nothing more than a short, four-day lasted spark. The operation on which MKO had heavily invested turned to be a total military failure and a proven suicide operation that led 1304 forces, according to the organization’s own report, to their sacrifice. In fact, MKO hurried to take advantage of a no-war no-peace situation created after the ceasefire in limbo, a golden opportunity for Rajavi to take his last chance totally disregarding the high cost it would impose. Of course, Rajavi knew beforehand what the result could be when he decided to pass over the borders of a country that had survived eight years a war that had wore out Saddam’s army. But he was desperately in need of and search for an outlet out of an inevitable cul-de-sac rather than to accomplish a strategic necessity. An analysis of the operation from the political and tactical point of view and Rajavi’s rationalization of the operation indicates that the move was the outcome of a desperate situation that had completely immobilized Mojahedin both in political and military fronts.
It was a fact many of group’s sympathizers, advocates and even critics and other opposition were well aware, but they were all shocked to see that a group that had once concentrated all its campaign marrow in a form of militia warfare and had already suffered great loss, suddenly and unbelievably had shifted to a classic military tack to start a big cross-border operation.

The failure of the operation Eternal Light initiated challenges against Rajavi’s egocentric decision-making that had led hundreds of recruits, many of them arrived in Iraq only a few days prior to the operation with the list military training, to their death. Most of his critics believe that the operation was in no way correspondent with the organization’s line of strategy and that, Rajavi’s uncertain analysis of the post cease-fire situation compelled him to make a hasty decision to create a ‘turning point’ to attract the attention of those in the West to be relied as a potential tool to be utilized against the Iranian regime. As stated in its later analyses, MKO claimed that “What distinguishes the Eternal Light Operation, making it a "turning point," is not its unique military achievements alone, but more importantly, its strategic political and historic significance”.

In spite of MKO’s widespread terrorist operations of bombing and assassination inside Iran and its later out-of-the-border organized hit and run operations perpetrated in the last three decades as well as its broadly launched military operation like that of the Eternal Light, it seems that the organization has never been considered a serious threat for the Iranian regime. But the consequence of such irrefutable charges of militarism and terrorist atrocities for MKO was to be globally recognized as a terrorist group. However, the good part is that the history and the recorded facts can never be distorted. But some Western countries tried to when they made a sudden U-turn and decided to declare that MKO was no more a terrorist organization; they still continue their negligence and unclear position takings toward Mojahedin due to political considerations. People have eyes to see and minds to think even if some so-called court of justice proceeds inexpertly to discolor the spots of a leopard.