Iraq’s defence ministry said on Tuesday it would probe claims that 34 residents of an Iranian dissident camp died during an Iraqi military operation last week and suggested some may have been killed before troops moved in. 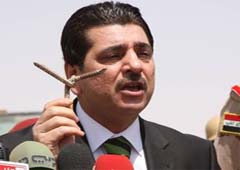 Iraqi authorities have said three people were killed at Camp Ashraf on Friday when security forces responded to rock-throwing and threats by residents during an operation to reclaim land from the camp and return it to farmers.

The controversial camp northeast of Baghdad, which houses a guerrilla group that opposes the Shi’ite cleric leaders of neighbouring Iran, has been a thorn in the side of Washington, Baghdad and Tehran for years.

Defence Ministry spokesman Mohammed al-Askari said the disparity in the death tolls prompted the government to open an investigation “to look into the real details of the operation, to know how many people exactly were killed, the reasons for the deaths and the date of the deaths”.

“We, at this time, can’t give sufficient answers to these questions,” he told reporters in Baghdad.

Ashraf is the base of the People’s Mujahideen Organisation of Iran (PMOI), which the United States, Iraq and Iran consider a terrorist group.

Sunni dictator Saddam Hussein gave it refuge in Iraq in the 1980s and some of its fighters joined him in the battle against Iran. The group surrendered its weapons to US forces after the 2003 invasion that ousted Saddam.

QUESTIONS
Askari said the government had evidence that some residents had wanted to leave Ashraf but were prevented from doing so by camp leaders, and that some of the alleged victims were shot “in a professional way, in the head, chest and heart”.

“This makes us believe that it was a pre-orchestrated operation,” he said. “Are these killings done by some elements from inside the camp? Are these previous deaths or even deaths that happened after the event?” “All these questions will be answered by the investigation.” In an emailed statement, Mohammed Mohaddessin of the National Council of Resistance of Iran, the PMOI’s political wing, called Askari’s comments “worthless lies … the final episode of a ridiculous scenario by the Iraqi government that initially claimed that in the attack no violence was used.” Iraqi officials have said the three residents who died were run over by military vehicles.

Askari said soldiers had been ordered not to use live ammunition during the operation at the camp, which is located in restive Diyala province about 65 km (40 miles) northeast of Baghdad in an area largely inaccessible to journalists.

The camp’s fate has been in question since the US military turned it over to Baghdad in 2009 under a bilateral security agreement. An Iraqi government spokesman said on Monday Ashraf residents would be given until year-end to leave the country.

Washington blamed Baghdad for the violence at Ashraf and the United Nations has sought access to monitor the camp.