Terrorist MEK to be expelled from Iraq

The deadline would not be extended

A Conference in Baghdad University on Friday 25 November was organised by Al-Edalat Al-Iraqi Society, headed by Dr Nafe Al-Isa, which represents the families of 25,000 Iraqi victims of the MEK.
The Conference was held in Al-Hakim Conference Centre in Baghdad University and hundreds of tribal leaders, University lecturers, Governmental representatives and officials, NGOs and media representatives filled the salon. Although Camp Ashraf and the MEK is an issue specific to the government and citizens of Iraq, the Conference organisers made sure to invite Western agencies, such as the UN, EU and diplomats who have claimed or expressed an interest in Camp Ashraf. Unfortunately, however, any such invitees were apparently unable to leave the Green Zone to attend the Conference and talk to the delegates.
Opening the Conference, Dr Nafe, speaking on behalf of the families of victims of MEK violence, asked that those MEK leaders who were responsible for this violence be brought to justice before their deportation.
Speakers from the government and NGOs all emphasized that the deadline for deportation must be strictly adhered to and that Iraqi and international law against terrorism and crime must be upheld. Other speakers, in particular the tribal leaders spoke about the MEK’s crimes which they have witnessed in recent years in Diyala province. They were highly critical of the failure of the American military to dismantle the camp after 2003, and were scathing of the continued American backing which allowed the camp to be used for training and inciting terrorism against Iraqis.
On this theme, Jasem Al- Ebadi, Member of Parliament and member of the parliamentary Human Rights Commission used his speech to criticise EU efforts to keep the terrorist group intact and their opposition to the deportation process. He commented that if they are so in love with this terrorist group, why don’t they take them to their own countries? 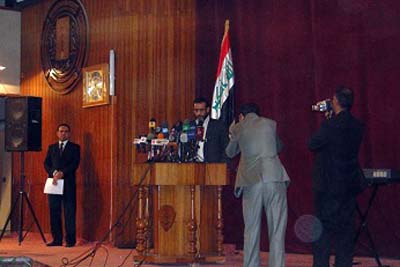 Mr Adnan Al-Shahmani, head of the Parliamentary Committee to oversee the expulsion of the MEK announced in the Conference that the deadline would not be extended and that the camp will be closed by the end of the year. He also explained that the Iraqi Judiciary had issued its final verdict that the camp should be closed and the land handed back to the original owners.
Mr Al- Shahmani also criticized the West for its silence toward the crimes committed by the group against civilians, and asked international communities not to remain silent in the case of the abuse of the rights of the families of the victims of the MEK. 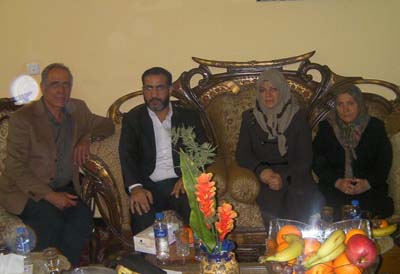 Mr Al-Shahmani also met with the representatives of the families of hostages inside Camp Ashraf and the delegation from European countries who are campaigning to ensure a peaceful outcome to the standoff at the camp. 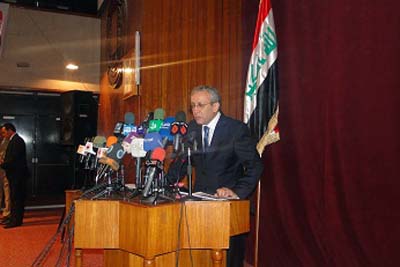 Massoud Khodabandeh, from Middle East Strategy Consultants which is working with the Iraqi government to resolve the situation at Camp Ashraf, introduced his book ‘The Life of Camp Ashraf – Mojahedin-e Khalq Victims of Many Masters’ to the Conference. The book places the MEK in the context of its foreign ownership and concludes that these owners have invested heavily in the MEK’s ability to commit acts of violence and terrorism, and that this is the reason for western resistance to closing the camp. The book particularly highlights the MEK’s refusal to allow residents of the camp to have contact with their immediate families as a fundamental human rights abuse of every person in the camp. 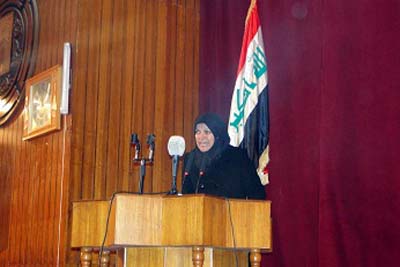 Ms Abdollahi represented the families and asked for help to release the hostages (including her own son) from the camp. Ms Abdollahi reminded the Conference that the families’ struggle to find their relatives had been going on since 2003 and that a permanent picket had been established two years ago. She stressed that when searching for a solution the families of course have the security and safety of all the residents as their utmost priority. The families have the simplest and easily granted request – to visit their loved ones who are in the camp. This does not depend on the removal of the MEK from Iraq and would be simple to do. The only barrier to this request is the order of the MEK leaders Massoud and Maryam Rajavi. They can easily resolve this issue by ordering that the families of MEK members be allowed to have free and unfettered contact with their loved ones. 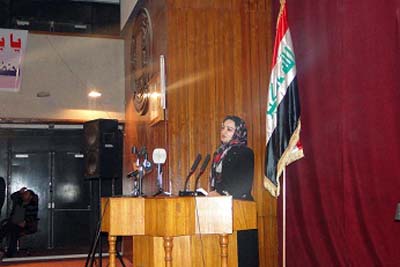 Ms Sanjabi is an ex-member of the MEK’s women only Leadership Council. She managed to escape from Camp Ashraf very recently, and explained the dire situation of the women inside the camp, detailing disturbing and shocking human rights abuses which are currently being carried out against the residents by the MEK leaders. 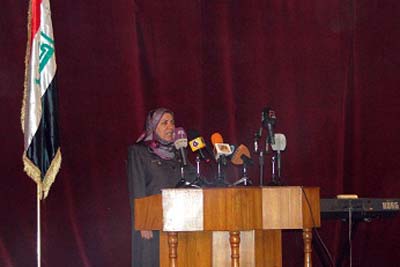 Ms Mahdian, whose husband is a hostage inside the camp, explained how Saddam’s Intelligence services gave her husband to the MEK as a slave, even though he had been and is still a registered POW, captured at the start of the Iran-Iraq war. Ms Mahdian explained that her son has not seen his father for the past 25 years and the MEK would not allow this visit even after two years of picketing. 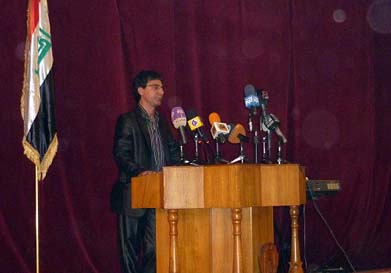 Mr Sadeghi from Germany, who is one of the few members who managed to run away from the camp successfully during the time of Saddam Hussein, presented and explained evidence of recent MEK interference in the internal affairs of Iraq, their collaboration with Saddamists and other terrorist groups, and the MEK’s active role in intensifying the insurgency. 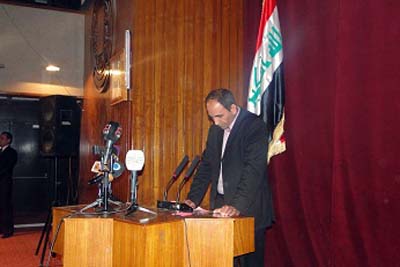 Mr Ghashghavi also from Germany, served eight years without trial in Saddam’s prisons including Abu Ghraib for refusing to carry out Massoud Rajavi’s orders to commit criminal acts. Mr Ghashghavi explained how Rajavi and Saddam would force people to either kill others or be sent to the torture chambers themselves and be killed. 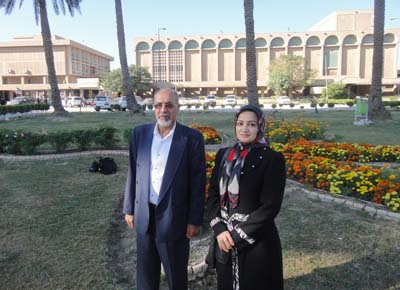 Another ex-MEK member, Mr Ezati who now lives in the Netherlands, gave interviews to the media explaining the situation inside the camp and the constant abuse of human rights of the victims. Mr Ezati strongly criticized the unfortunate media silence over these human rights abuses which he ascribed to the pervasive influence of the MEK’s powerful backers who regard the MEK as “good terrorists”. 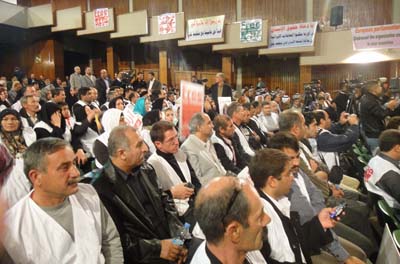 Tens of ex-MEK members who work with Nejat Association in Iran, also attended the Conference and were interviewed by the media. They explained that Nejat Association, which works closely with the families of the hostages, now has the capacity to help those survivors who wish to do so, to go back to their country under the amnesty which was granted by the Iranian authorities in 2003 (which is based on the understanding that the MEK members have been subjected to the coercion and control of cult leaders) and which to date has been upheld under the supervision of the ICRC.
Conference attendees were particularly interested in the testimony of three recently escaped camp residents who gave full and detailed explanations to the media about the harsh reality of being a captive inside Camp Ashraf. They spoke about the total information blackout and social and emotional isolation they experienced there. They emphasized that the leaders and the hostage takers lie constantly to the residents so that the captives have no idea about the outside world. They are made to believe that the MEK leaders are directly supported by the Americans and that if they tried to escape the camp they would be immediately shot, or now, after being tortured by the Iraqis they would be handed over to Iran to be executed without trial. They said that if they were given the true facts and information, there is not one person in the camp who would still want to stay in the desert of Iraq nearly nine years after disarmament. They urged international organizations, especially the US representatives and UNAMI, who are the only organizations with close relations with the hostage takers, to take advantage of their weekly meetings inside Camp Ashraf with the hostage takers, to persuade them to open up the flow of information and convince them to give people the right to family visits as well as normal means of communication such as writing and telephones, etc.
These recently escaped hostages also urged UNAMI not to present the hostage takers as the representatives of the hostages in the media outputs. Instead they should be clear that Rajavi is no one’s representative and as long as the negotiators have not met with the hostages without the presence of the MEK commanders – the hostage takers – outside the camp, they have no right to claim anything on their behalf. They said they believe that UNAMI and the American backers of the cult are in breach of international law for siding with the terrorists as these are people who have abused the human rights of over 3000 people for decades. The survivors of Camp Ashraf are now taking legal advice to claim compensation for their suffering and losses from the MEK leaders.