Mujahedin-e Khalq in the new List of Terrorist Organizations

written by US State Department February 8, 2012

State Department: It is unlawful to provide support to Listed Terrorists!!

Foreign Terrorist Organizations (FTOs) are foreign organizations that are designated by the Secretary of State in accordance with section 219 of the Immigration and Nationality Act (INA), as amended. FTO designations play a critical role in our fight against terrorism and are an effective means of curtailing support for terrorist activities and pressuring groups to get out of the terrorism business. 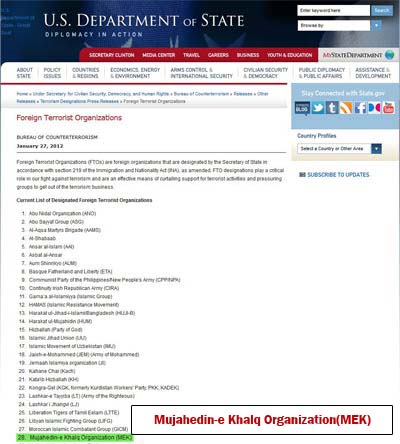 Identification
The Bureau of Counterterrorism in the State Department (S/CT) continually monitors the activities of terrorist groups active around the world to identify potential targets for designation. When reviewing potential targets, S/CT looks not only at the actual terrorist attacks that a group has carried out, but also at whether the group has engaged in planning and preparations for possible future acts of terrorism or retains the capability and intent to carry out such acts.

1. It is unlawful for a person in the United States or subject to the jurisdiction of the United States to knowingly provide”material support or resources”to a designated FTO. (The term”material support or resources”is defined in 18 U.S.C. § 2339A(b)(1) as”any property, tangible or intangible, or service, including currency or monetary instruments or financial securities, financial services, lodging, training, expert advice or assistance, safehouses, false documentation or identification, communications equipment, facilities, weapons, lethal substances, explosives, personnel (1 or more individuals who maybe or include oneself), and transportation, except medicine or religious materials.” 18 U.S.C. § 2339A(b)(2) provides that for these purposes “the term ‘training’ means instruction or teaching designed to impart a specific skill, as opposed to general knowledge.” 18 U.S.C. § 2339A(b)(3) further provides that for these purposes the term ‘expert advice or assistance’ means advice or assistance derived from scientific, technical or other specialized knowledge.’’
2. Representatives and members of a designated FTO, if they are aliens, are inadmissible to and, in certain circumstances, removable from the United States (see 8 U.S.C. §§ 1182 (a)(3)(B)(i)(IV)-(V), 1227 (a)(1)(A)).
3. Any U.S. financial institution that becomes aware that it has possession of or control over funds in which a designated FTO or its agent has an interest must retain possession of or control over the funds and report the funds to the Office of Foreign Assets Control of the U.S. Department of the Treasury.

Other Effects of Designation

US restricts its support for Regime change in...

Pompeo orders diplomats not to meet with MEK...