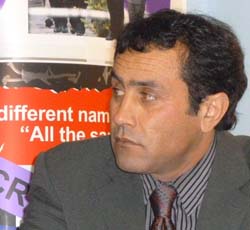 I , Homayoon Kahzadi , am the separated member of pmoi , Rajavi’s cult who had spent 15 years of my life in this cult(mko,pmoi,Rajavi’s cult). Today I am very happy and joyful that I can write such a letter to you in the free world in support of my friends who are still in Rajavi’s cultic captivity.

An Iranian proverb says, ¨ when a member of a body is hurt by time, the other members will react¨

Any delay in the trial of pmoi leadership is inappropriate and unacceptable because the presence of this cult in European countries is much more dangerous than explosion of an atomic bomb and I urge you not to allow them to expand their terrorist activities in your country as well as European countries .

Being silent in front of such terrorist and cutthroat cult which is not committed to any international regulations and rules of law, is considered as humane behavior?

Closing eyes upon their terrorist past and the breach of human rights by them (by invoking to the human rights watch report) is not like training and breeding a deadly and poisonous snake by our hands?

Have you thought seriously about the consequences of mujahedin terrorist cult and their activities?

The leadership of mujahedin’s cult has perpetrated awful deeds ranging from terrorism and assassination to money laundering and schematizing among parties and interfering in other countries affaires , for instance;

Fake and false propaganda and flashy vote of a court of law in Spain against the Iraq prime minister which does not have any lawful prestige among other countries for instance:

The Ashraf scuffles which has been carried out by the direct order of Rajavi , they pretend that those scuffles are US fault. I draw your attention to the following topics which the pmoi leadership have issued them in their Media:

From now on the responsibility of any blood which is shed in Ashraf, is on USA and the Iranian resistance is no longer ready to negotiate about the relocation of Ashraf residents inside Iraq.¨

The Rajavi’s cult site, the article written by Manochehr Hezarkhani by the title ¨ An intermediate for US plan¨:

¨ I do not know when the European representatives see this badger ambassador, how they feel¨

The Rajavi’s cult site has published an article by the title¨ Ashraf camp the criteria of sincerity in US idiotic policy ¨ which is written by Sanabargh Zahedi one of the cult members .

This cult which has not left Iraq yet, has begun straggling with principals and policies of other countries, wait and see while they reach to European and American countries, what they will do!

The ringleaders of this cult have issued the death decree and harassment of all separated members and their dissidents and opponents throughout the world and they threaten the family of those captives who want to see their loved ones and they insult the Iraqi government by calling them names such as mercenary and traitor.

Yes there is no trust on wolves , so I urge you to confine this terrorist cult by all means and stop all their activities which ends up to violence and bloodshed and surrender the cult ringleaders to the justice .