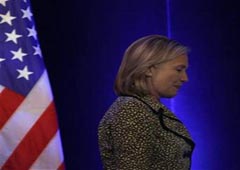 organization, in part because of the group’s resistance to abandoning its camp in Iraq, two American officials said Wednesday.

The group, the Mujahedeen Khalq, or People’s Mujahedeen, has mounted a costly campaign to be removed from the terrorist list, enlisting an array of prominent American politicians and former military officers to press the case that the group abandoned violence years ago.

The two officials, who spoke on the condition of anonymity because the matter involves litigation, said Mrs. Clinton had not made a decision yet. But they said the group’s refusal to complete a move from Camp Ashraf to the former site of Camp Liberty, near the Baghdad airport, may doom its bid.

Under a court ruling, Mrs. Clinton must make a decision on the terrorist listing before Oct. 1. While the group, also known as M.E.K., carried out bombings in Iran in the 1970s against the shah’s government and later against the Islamic government, causing the death of several Americans, by most accounts it has not engaged in terrorism in recent years.

Asked why the M.E.K.’s failure to move from Camp Ashraf was relevant to the terrorist designation, one official said that the group had long used the facility for paramilitary training. Though the group was disarmed after the American-led invasion of Iraq in 2003, he said, a refusal to move would raise questions about whether the group has truly changed its intentions.

A spokesman for the M.E.K. in Paris, Shahin Gobadi, said in a statement that linking the group’s cooperation in relocating and its designation as a terrorist group would be “illegal and illegitimate.” He said that to relist the group would be a “license” for Iraqi forces to “massacre” the group’s members in Iraq, and that the State Department would bear responsibility.

Under orders from the Iraqi government to vacate Camp Ashraf, which was given to the M.E.K. by Saddam Hussein, the group moved about 2,000 of the 3,200 residents to the new location to await a possible move as refugees to new countries. But the convoys stalled in May after M.E.K. leaders said conditions at Camp Liberty were inadequate.

The Iraqi government has close ties to Iran, which has complained about the presence of its sworn enemies at Camp Ashraf. A reported 47 M.E.K. members have been killed in previous clashes with Iraqi security forces, and both American and United Nations officials have urged the group to complete the move to avoid further violence.

On July 15, a 26-truck cargo convoy delivered air-conditioners, furniture, video games and other supplies from Camp Ashraf to Camp Liberty with the permission of the Iraqi authorities, a breakthrough that American officials hoped would persuade the M.E.K. to finish the transfer of the remaining 1,200 residents.

Instead, M.E.K. officials voiced new complaints about the conditions at Camp Liberty, which they described as a “prison,” and so far they have refused to resume the move. Dozens of members of Congress have written to Mrs. Clinton to express concern about the state of the camp, but American officials who have visited it report adequate conditions, including ample water and electricity and even a recent shipment of 200,000 cans of soda.