Just after the downfall of Saddam, the Iraqi dictator, tens of mass graves were discovered around 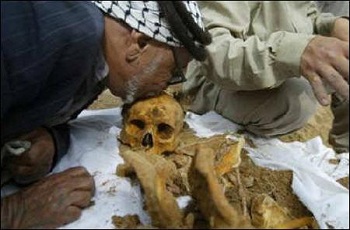 Iraq, where thousands of Iraqis had been buried after apparent mass executions. The discovered graves accounted for a plainly shocking fact that how Saddam got rid of his opponents with no sense of remorse or mercy. And now after the evacuation of Camp Ashraf, a bastion for his mercenary forces, additional dimensions of crimes committed by his mercenaries have been unearthed.

The latest reports endorse that the terrorist Mojahedin Khalq Organization (MKO/MEK/PMOI/NCR), known as witting accomplices in Saddam’s crimes, have been talented students of the late criminal master. As an Iraqi official says, several mass graves have been unearthed in Camp Ashraf. Reportedly stressed by Sadeq al-Husseini, the deputy chairman of Diyala’s provincial council, the Iraqi Ministry of Human Rights is in charge of determining the identities of the bodies and to whom they belong; Kurds, Arab local residents or else. Regardless of the bodies’ identities, they have been human beings either slaughtered by Saddam, MKO’s forces or in joint operations. In any case, the responsibility is on MKO as it has long been dwelling on the bones of these bodies concealed from the outside and the parents and relatives who never heard any news of them.

The huge controversial feature of the MKO was its decision in 1983 to ally itself with the former Iraqi regime of Saddam. Arriving at an agreement, Massoud Rajavi moved, along with his loyal ring-leaders and majority of his forces, to Baghdad in 1986. Forming the National Liberation Army there with Saddam’s aid, he dispatched his forces to fight alongside Iraqi forces against Iranian troops that led to further diminishing of MKO’s credibility inside Iran. Moreover, a number of Iraqi Shi’ites and Kurdish organizations have alleged that MKO forces played a role in the suppression of the so-called Safar Intifada of March 1991 against the former Iraqi regime.

MKO’s collaboration with Saddam against Iraqi people exerted a dramatic impact on the group’s internal relation that led to serious inter-organizational problems as well as external challenges. Several dozen members announced their defection and deserted Camp Ashraf protesting among other things the group’s complicity in the suppression of Kurdish and Shi’ite uprisings in the aftermath of the Kuwait war. The arrival of these former members in Europe and their organized attempts at spotlighting the alleged abuses and deviations of the organization, led MKO to intensify its character assassination campaigns against its former members and to label them as the agents working for Iranian regime.

A slew of detentions inside MKO camps and torture at the hands of senior members were also the harsh reaction against the protests. But soon the outside world came to be notified of what was going on within the group when a credible and high-profile human-rights organization for the first time revealed and verified the testimony of the detached members. The 28-page HRW report, “No Exit: Human Rights Abuses Inside the MKO Camps”, details how dissident members of the group were tortured, beaten and held in solitary confinement for years at military camps in Iraq after they criticized the group’s policies.

With the fall of Rajavi’s bastion, the world will see more of the democracy he has promised to establish. These mass graves are just a miniature sample of a future democracy in a greater world. Many facts have already come out and this is not the last one which follows.