Nobody is immune from the threatening, anti-human, cultic practices of MKO 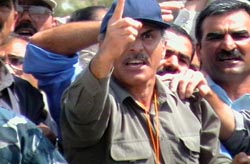 agent of Iranian regime whenever the organization ever publicizes the news of some defection itself. The announcement does not appear just after the escape or defection but months and even years later and after the group fails to come to terms with the defected to stop him/her talking out. The stigma, MKO believes, on the one hand will possibly neutralize the disclosures and on the other, hand will boost a propaganda battle to talk big of its intelligence potentiality in detecting the infiltrated agents. Thus, it may appear to many as a never-ending battle between MKO and Iran’s Ministry of Intelligence and security; and of course the more secretive and sophisticated the ministry is depicted the more capable its rival can be proclaimed.

But there are other reasons for MKO to enter a demonizing campaign against the regime’s security apparatus. Majority of the ranking members who leave MKO have been aware of hypocrisy and corruption within the group and majority are victims of cultic abuses themselves. However, as they have maintained an element of independence and some connection with their old values, they consider it a responsibility to become a volunteer to disclose facts long concealed from the public under a variety of pseudo social and democratic activities. Naturally, unable to provide justifiable responses to what MKO claims allegations against it, the group directs countless hateful attacks and attempts at character assassination of the defected members. The smear and character assassination campaign against dissidents further ensures that the exposé continues with full force.

That is why MKO was among the firsts to publicize the report by the Library of Congress report on Iran’s Ministry of Intelligence and Security and to translate its parts, particularly those concerning MKO and ex-members, into other languages to be circulated in a variety of affiliated web-sites and blogs. Although the report itself blends fact and fiction, a look at the given references leaves no doubt that either MKO has been tasked with the responsibility to prepare the report or has acted as a close consultant in preparation. Typically, whenever a disclosure is made by some defected member, MKO call it a slander against the group and a work of individuals who officially work with the regime. To look at it through the eyes of MKO and its leaders, anybody who is against the group is an agent of Iranian regime, that is to say all Iranian people but the group’s members and sympathizers. They include even the families who insist to see their relatives and children held against their will by the group.

To have a real understanding of the intra-organizational behaviors and principles within MKO in relation with the defection of members, the split and runaway of a member, and the ranking members in particular, is considered an unforgivable sin since the escapes have always faced the group with serious challenges. That is mainly because they make the closed group vulnerable to outsiders’ scrutiny. As a rule, the members are organized into teams and units each headed and controlled by a loyal ranking who is directly responsible for the deeds of his subordinates and their defections and escapes since they impose considerable political costs on the organization due to the fact that it would be hard to figure how much information is disclosed by the defected and to whom. Even the rank-and-files are under tight control if they turn to be willing to leave. To tell the truth, neither the insiders nor the ex-members as the outsiders are immune from the threatening, anti-human, cultic practices of MKO. It is a global threat and problem to be dealt with.