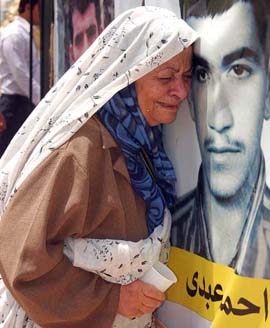 the members of the cult who are trapped in Ashraf or in Liberty camps have been holding a sit-in opposite the UN office in Geneva for more than two years demanding the safety of their loved ones.

This deception has been instigated because for more than three years the genuine families of these people have held a sit-in in Iraq, just outside Ashraf camp. Their demand is to be able to meet with their loved ones for even a short time. This request has been vehemently denied by the MKO authorities.

While the cult leader Massoud Rajavi calls the genuine families ‘spies of the Iranian services’, he has gathered some paid individuals outside the UN office in Geneva under the guise of families.

Rajavi claims that the so-called families in Geneva demand the rescue of their relatives in Iraq; whilst Rajavi is the sole body threatening their safety. He does not let them out to determine their own destiny. He is using the excuse of ‘going back to Ashraf camp’ to disguise their real plight as his hostages.

Nowadays the cult’s lobbyists approach politicians and even ordinary people and paint a dreadful picture of the situation in Iraq by showing materials and then demand funds for the following:

1. The cult claims that the cost of the sit-in demonstration in Geneva, which they say is organized to safeguard the presence of their followers in Iraq, is around 40 thousand Euros a day. One might ask what they spend so much money on and for what reason.

2. The cult also demands funds for the lawyers they have hired in Europe for their activities regarding the inhabitants of Liberty. The question would be what might the lawyers do in Europe?

3. The third demand is to fund the meetings and rallies they hold in Europe which they claim are directly to the advantage of the followers in Iraq. The query is why they need so much propaganda just to make Maryam Rajavi well-known.

The truth is that all the money collected is used for Maryam Rajavi’s cosmetic surgery and her other luxuries while living in a suburb of Paris. Like all cults, the followers do not benefit from the income. They just have to work hard day and night for no pay and play the role of hostages for Rajavi by which he makes his impossible demands in Iraq. This is why cults are known to practice new slavery.

At the moment, some genuine family members have gone to Geneva to raise their case against the MKO leaders who have trapped their relatives in Iraq. In advance the cult leaders have called them ‘agents of the Iranian regime’. The MKO has also named Sahar Family Foundation in Iraq as an NGO related to Iran.

As the investigation show, those who have been brought to Geneva by the MKO are not the families of those in Iraq; they are paid lobbyists who do not bother too much to participate regularly in the sit-in.

We have to warn everyone that the MKO is a destructive mind control cult using all means of fraud and deception to gain money, manpower, political support and propaganda.