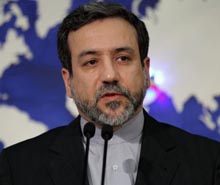 Reacting to the allegation on Friday, the ministry’s spokesman, Seyyed Abbas Araqchi, dismissed the claim as mere lies by the “desperate” terrorist group.

On Thursday, the MKO claimed to have evidence of an underground nuclear site built under a mountain near the city of Damavand, 70 kilometers (43 miles) northeast of Tehran.

The terrorist group alleged that the site had existed since 2006 with the first series of underground tunnels and four external depots recently completed.

“This report is by no means true and is denied [by the Islamic Republic of Iran],” Araqchi said, adding, “The terrorist MKO has been so discredited that the publication of such stories by them is not worth a response,” he added.

The Mujahedin-e Khalq Organization – blamed for the assassination of many Iranian people and officials after the 1979 Islamic Revolution – fled to Iraq in the 1980s, where they enjoyed the support of former Iraqi dictator, Saddam Hussein, and set up a military base near the Iranian border in Diyala Province.

Members of the anti-Iranian group currently live at Camp Liberty, a former US military camp near Baghdad Airport, after their relocation from their former Camp Ashraf under growing pressure from the Iraqi government and people for the terrorist group to leave the country.

The US, Israel and some of their European allies have frequently accused Iran of pursing military goals in its nuclear energy program with the US and EU using that pretext to impose illegal unilateral sanctions against the Islamic Republic.

Tehran has categorically rejected the accusation, arguing that as a signatory to the Non-Proliferation Treaty and a member of the International Atomic Energy Agency (IAEA), it is entitled to develop nuclear technology for peaceful purposes.

Also, during its numerous inspections of Iran’s nuclear facilities, the IAEA has never found any evidence that the Iranian nuclear energy program has been diverted toward non-civilian purposes.