A Ph.D. Arabist-Islamologist and former lecturer at the University of Wisconsin-Madison said, “I am ashamed that my tax dollars and my neighbors’ and family’s tax dollars are supporting these horrible acts,” referring to the US and Israeli backing and funding violent groups in Iran during the past 30 years which cost the lives of over 17000 Iranians. 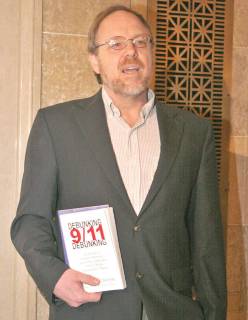 “Much of the world does not know that Iran has been targeted by terrorists far more than most other countries,” Dr. Kevin Barrett said during an interview with Habilian Association.

He noted that the National Congress of 17000 Iranian Terror Victims which is going to be held on August 31st, 2013, in the capital Tehran “will contribute to educational efforts to help demythologize the problem of terrorism.”

Asked about the bombing of the Prime Minister’s Office in August 30, 1981, he said, “This event is virtually unknown in the West, and has been completely ignored in the Western media’s discussion of terrorism.”

“One of the reasons is the West’s hostility toward Iran,” added Barrett. “Another is that this bombing does not fit the false Zionist narrative of ‘Islamic terrorism’ and ‘non-Muslim victims’, since the perpetrators were fanatical Marxist secularists, while the victims are associated with the Islamic Revolution.”

The American political analyst added that, even in the West, the MEK is known as one of the world’s most vicious and extremist terrorist groups. “The 2012 US de-listing and subsequent support of the MEK is an extreme example of the characteristic hypocrisy that guides US policy on terrorism.”

“There is an odd disconnect between the European people, who (according to polls) view Israel and the US as the two biggest threats to world peace, and the anti-Iranian policies of European governments,” he added, concerning the European countries’ support for MEK.

“This disjunction between public opinion and official policy calls into question European countries’ claims to being democracies. Another sign that Europe is not democratic: The European parliament has verified that the US and NATO directed the wave of Operation Gladio terrorism that killed hundreds or thousands of Europeans in the 1970s and early 1980s, yet Europeans have never been able to prosecute the terrorists – who still rule them.”