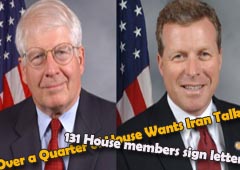 Once the Mujahedin Khalq Organization (MKO) was delisted from the list of Foreign Terrorist Organization of the US State Department, the group opened its Washington office and paid Senator Robert Torricelli to register for lobbying in the Congress on behalf of the group." Unable to operate openly in Iran, the MEK is instead waging some of its battles in Washington” ,reported Susan Cornwell of Reuters. "It opened an attractive new office in April just a five-minute walk from the White House”. [1] In contrary to the efforts of the MKO agents in the United States, on July 18, 2013,   131 members of the US Congress signed a letter urging President Obama to reinvigorate Iran diplomacy. The letter, being circulated by Representatives David Price (D-North Carolina) and Charles Dent (R-Pennsylvania), is the biggest ever pro-Iran diplomacy letter from the Hill, those supporting the initiative said. [2]

A day before the Dent-Price letter was published,  Ryan Costello special correspondent to the Huffington Post reported that 29 prominent former government officials, diplomats, military officers and national security experts sent a letter to President Obama urging him to “seize the moment to pursue new multilateral and bilateral negotiations with Iran once Rouhani takes office and to avoid any provocative action that could narrow the window of opportunity for a more moderate policy out of Tehran.” Costello believes that the Obama administration has, rightfully, expressed cautious optimism over the election of Rouhani as a moderate Iranian authority. [3]

This is no good news for the MKO. The group has so far advocated for a tougher US policy towards Iran paying large amounts of money to US prominent figures to "stop appeasing" Iran. The MKO leaders who seek the overthrow of the Iranian Government criticize the West for what they call "appeasement policy" towards Iran.  "Long active as an advocacy group in the United States and Europe, the MEK is now formalizing its campaign to pressure the Obama administration to maintain a hard line – including in multilateral nuclear talks – with the Islamic Republic, which it hopes will one day crumble", according to Susan Cornwell. [4]

As Jason Ditz of the Antiwar website puts, "Getting to the top of a Congressional committee with foreign policy implications is reserved mostly for the lunatic hawks, and Congressmen who are reasonable are usually anonymous." But this time as Ditz admits, the names of the signatories of the letter are known to everyone.[5]  Worse news for the MKO is that the name of one of its high profile sponsors is found among the signatories of the Dent-Price letter: Senator Sheila Jackson Lee who is "longtime Mujahedeen champion" according to Elizabeth Rubin. [6] Jackson is one of the speakers at the MKO’s recent gathering in Villepinte. She calls Maryam Rajavi "sister". According to Maryam Rajavi at the same rally, "western countries and appeasers are trying in vain to portray such a figure [Rouhani] as a moderate".[7] Congresswoman Jackson Lee seems to be confused between the generous offers of the MKO and her 130 peers who believe that " it will  be prudent for the United States to utilize all diplomatic tools to reinvigorate ongoing nuclear talks."[8] However, Jason Ditz implies that the Israelis agree with Maryam Rajavi rather than their American friends, " That’s not going to sit well with the Israel Lobby, as Prime Minister Benjamin Netanyahu has already made it clear that the he wants the US to treat Rohani with hostility, and the Obama Administration has already suggested that’s the path they’re going with."[9]

In order to encounter any move based on engagement and diplomacy regarding Iran, the MKO propaganda machine runs hysterically. Occasionally, together with their multi-million dollar lobbying campaign, the MKO instigators repeat their so-called revelations about the Iranian nuclear program making efforts to convince the West that the Islamic Republic is seeking a nuclear bomb – what the reportedly new sponsor of the group Benjamin Netanyahu is also yelling about. The most recent allegation by the MKO on the Iranian Nuclear program was released last week. To their surprise the Dent-Price letter was regulated a few days after the group claimed to have discovered a secret site in the mountains Northeast of Tehran but the report could hardly ever attract attention in the world. "The group released satellite photographs of what it said was the site. But the images did not appear to constitute hard evidence to support the assertion that it was a planned nuclear facility”, reported Reuters. [10]

"Clearly, the MEK’s latest revelations are recycled claims and, like before, are essentially allegations based on vague intelligence leaked to the group by American officials",  suggests Nima Shirazi at Wide Asleep in America. "The MEK merely acts as a laundering service for the unproven accusations of its handlers in the United States and Israel." [11]

[7] Nejat bloggers are either former MKO members or have a family member who is currently held in Camp Ashraf. They have suffered deeply because of Massoud Rajavi’s crimes. While the Nejat Bloggers recognize that citing sources of information is essential ,we, as a society feel so strongly against the MKO that we have agreed to not include the group’s websites or links in our articles because we consider it as kind of publicity for the cult.