Shedding light on the terrorist nature of the Mujahedin-e-Khalgh Organization; 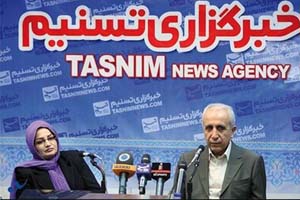 nature of the group which has a long history of hostility and terrorist attacks against the Iranian nation. Ebrahim Khodabandeh and Maryam Sanjabi had been working for the MKO for over 20 years before escaping from the group’s camp in Iraq almost 10 years ago.

The press conference comes only days before the anniversary of the 1981 bombing in Tehran which killed scores of Iranian officials including then Prime Minister Mohammad Javad Bahonar and President Mohammad Ali Rajaei who had been elected only three months before. The MKO claimed responsibility for the attack.

The MKO – which the US removed from the list of its terrorist organizations last year- fled Iran in 1986 for Iraq, where it enjoyed the support of Iraq’s executed dictator Saddam Hussein, and set up its camp near the Iranian border. The group is notorious for carrying out numerous terrorist acts against Iranian civilians and officials, involvement in the bloody repression of the 1991 Shia Muslims in southern Iraq, and the massacre of Iraqi Kurds in the country’s north under Saddam.

Even after the execution of Saddam Hossein the terrorist group still continues its acts of terror against the Iranians under the support of certain western powers; Iranian security sources say the assassination of a number of Iranian scientists is the result of the direct cooperation between MKO and the US-Israeli intelligence services. Last year the US and Canada joined the EU in removing the MKO from their list of terrorist groups. Iranians were shocked by the decision, as was anyone who favors peace in the Middle East.

Since its establishment, the Islamic Republic of Iran has been targeted by different terrorist groups inside the country that according to experts has made it the prime victim of terrorism in the world.