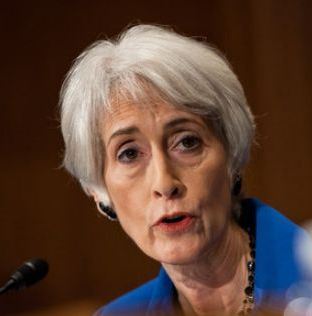 commence. Wendy Sherman, the Undersecretary of State for Political Affairs, said delaying sanctions ahead of talks scheduled for October 15 and 16 in Geneva would give Iran the opportunity to to take “real actions” at the Geneva meeting.

Many on the committee appeared skeptical and indicated they planned to consider new crippling sanctions despite positive signals from Iran’s new president, Hassan Rouhani. Committee Chairman Robert Menendez (D-NJ) was largely dismissive of Rouhani’s gestures, though he indicated he hopes concrete action will take place in Geneva. As for further sanctions, Menendez maintained that “as long as Iran is actively pursuing its nuclear program, we must actively work to increase the pressure.”

However, while the House passed a sanctions bill ahead of Rouhani’s inauguration in August, the Senate has yet to introduce its own version of the bill. It is all but certain that, given the government shutdown, new sanctions will not be introduced or considered before the Geneva talks.

Some Senators were dismissive of any new negotiations. Senator Marco Rubio (R-FL) told Sherman that the U.S. must not negotiate with “evil liars.” He challenged Sherman on what a deal with Iran would look like and whether the U.S. could “ever agree to ease sanctions in any negotiation that does not require Iran to abandon its enrichment and reprocessing capabilities.” Sherman refused to rule out a deal in which Iran retains enrichment—a point that many experts believe will be key to securing a verifiable solution but which is notably opposed by Israeli Prime Minister Benjamin Netanyahu.

The position of the U.S. on enrichment is unclear—under President Bush, the U.S. refused to negotiate directly with Iran unless the enrichment program was first suspended. Secretary of State John Kerry, as a Senator in 2009, called the Bush position requiring zero enrichment, “ridiculous” and said Iran has “a right to peaceful nuclear power and to enrichment in that purpose.” In 2011, then Secretary of State , Hillary Clinton signaled a shift from the Bush approach when she stated “[Iranians] can enrich uranium at some future date once they have demonstrated that they can do so in a responsible manner in accordance with international obligations.”

According to Sherman, a deal with Iran would realistically include limitations on the “pace and scope” of enrichment and greater transparency with regard to Iran’s stockpiles of enriched uranium. If Iran does not pass the “Geneva test”, she said, they should expect harsher sanctions—something Sherman says she and Secretary of State Kerry made clear to the Iranians following the U.N. general assembly. In terms of what a deal would look like, Sherman said that “the onus is on Iran” to clarify how far they are willing to go.

At least two dozen supporters of the Mujaheddin-e Khalq (MEK) filled the hearing room, sitting behind the panel in matching yellow jackets emblazoned with pro-MEK slogans. Senator John McCain advocated for the MEK’s safety in Iraq, criticizing the U.S. for not protecting MEK members from deadly attacks that occurred in Iraq’s Camp Ashraf. Sherman expressed concern but also noted that the MEK’s leadership in Paris was obstructing the process to resettle MEK members. A key demand of the MEK’s leadership is that the group’s members be allowed to relocate together as a single unit, rather than to be relocated individually to different countries. Menendez interjected and told Sherman that the MEK should be invited to relocate to the United States.