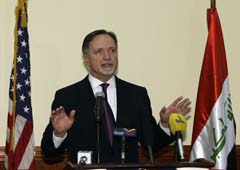 missing. Preliminary investigation into the incident points to it being an internal issue within the Mojahedin camp.

But, before the investigations being conducted by the Government of Iraq and UN officials have been concluded, some members of the US Congress, under the influence of the Israeli lobby (backers of the MEK terrorist group) have demanded not only that the US government cut aid and arms sales to Iraq but also to ensure that Iraq gives succour to the terrorist group in Iraq and allow them a free hand to carry out their activities there.

During the last week many MPs and officials, including the spokesman for Prime Minister Al Maliki’s State of Law coalition, have announced that should the US decide to interfere in the internal affairs of Iraq and interfere in the investigations already being carried out by Iraq and the UN in favour of the Israeli backed MEK, then the consequences will be immediately seen in a severance of ties between Iraq and the US; retaliation will be immediate and commensurate.

Al Maliki himself, in a visit to an anti-terrorism exhibition in Baghdad, in answer to press questions about the issue replied that if Washington is so in love with this terrorist group then they can open their borders to them immediately instead of asking us to keep them and cutting off aid.

To ease the effect of the influence of Israel in the American Congress, the US ambassador in Baghdad had to go public in order to separate the official US government line from that of the lobbyists and to try to promote the interests of America in Iraq rather than those of Israel.

In an interview with Al Mada Press, Stephen Beecroft said, “the United States has an agreement to help Iraq in all fields and to act as a partner to Iraq”. He noted that “there is chatter being fired from here and there about cutting aid to Iraq because of a failure to provide protection for some of the MEK, but we can assure the government of Iraq that we will not cut off their assistance.”

Washington called on the Iraqi government to continue to provide protection for the remainder of the MEK in Camp Liberty until, in cooperation with UNAMI, they could be transferred out of the country.