The Iraqi Council of Ministers announced Tuesday that it has assigned the Ministry of Foreign Affairs to address the United Nations, "to fulfill its obligations", in removing the members of the "MKO", considering their existence as contrary to the Constitution for being a "terrorist organization."

The council said in a statement a copy of which received by Ashraf News  , that, "the Council of Ministers 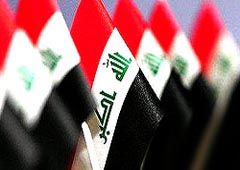 has decided to instruct the Ministry of Foreign Affairs to address the UN to fulfill its obligations it agreed on with the Iraqi Government to get the MEK out and transfer its members to other countries."

He added that the reason for the decision of the Council is, "the growing problems caused by the presence of the Organization (MKO) on Iraq’s national security and the security of neighboring countries, and because their presence is contrary to the Constitution for being a terrorist organization."

The Committee on ending MKO file announced, in September 22, 2013, that the Iraqi Government had lost patience with the file of the MEK terrorist organization, and confirmed that it was considering other options to issue a binding decision to end their presence in Camp Liberty. As the UN called upon the States concerned with the Camp to provide money to resettle MKO members in other countries and not just the giving tips, it held the Iraqi Government responsible for the safety and security of the residents of the camp.