Secretary General of the United Nations

Initially I would like to welcome you to Tehran on behalf of Nejat Society. Subsequently I wish you every success in your journey, and I hope that you would have a pleasant and productive stay in Iran.

Nejat (Salvation) Society consists of former members of the Mojahedin-é Khalq Organization (MKO) who have organized themselves in order to strive to help those members who are still mentally and even physically captive within the Organization in Camp Ashraf in Iraq.

You may well be aware that MKO has been listed as a Proscribed Terrorist Group by the US State Department, the Council of EU, and the British Government. This Organization has a long record of violating the most basic principals of Human Rights within its establishment including imprisonment, torture, child abusing, and even murder.

The Human Rights Watch in its latest report under the title of No Exit has tried to describe “Human Rights Abuses inside the Mojahedin-é Khalq Camps in Iraq”. This report explains how the “Exiled Armed Group Abuses Dissident Members”, and how this so called “Opposition Group Seeks Recognition in Western Capitals”.

Hundreds of people, who have managed to flee the Organization and have managed to return home to their families, have described horrendous practices conducted against the discontented members and defected followers. They have also explained how they have been persuaded and manipulated into serving the evil demands of the leaders; and how they have had the experience of being a mind and mental prisoner.

MKO is well known as being a cultic group with all its peculiar and yet typical characteristics. The Organization is led by a self-appointed charismatic leader who enjoys absolute control over the wealth, the lives, and even the minds of the followers. Some of the common manners widely reported inside the Organization are as follows:

• Exercising the Process of Brainwashing, Psychological Coercion, and Thought Reform.

• Appling Violence and Harassment against Critics and Opponents.

• Engaging into Conspiracy and Fraud.

• Taking Away the Members Freedom as well as their Possessions.

I also wish to draw your good attention to the Case of Ashraf Camp in Iraq. There are some 3000 people living under tight control of MKO in that Camp. These unfortunate individuals find no way to free themselves from the sever domination of the Leaders. They must receive help urgently.

I hence, on behalf of Nejat Society, urge you to the followings:

• Launching a Fact Finding Committee to start investigating inside Iran as well as Iraq and other countries and to contact the numerous Former Members of the Organization in order to reach a good understanding of the Nature and Behavior of MKO. Many ex-members around the world are willing to cooperate with such Committee.

• To bring the Organization under careful and thorough Scrutiny done by Officials of UN, something MKO has always escaped from, and to publicize the findings of such procedure.

• The issues of Terrorism, Violating Basic Right, and Functioning Cultic Approaches in the Organization’s History be under Close Inspection.

Nejat Society would be more than pleased to be able to offer any form of Cooperation in this manner. You are certainly acquainted to the severity of damages Cults can cause to the people and their relatives and families. Therefore you would realize how urgent and important the matter is and how essential it is to do something about it.

We in Nejat Society are anxiously awaiting your positive reply to our request to save and rescue the above mentioned inmates and give them a chance to start a dissent normal life along with their beloved ones back at home.

Let us see my brother after being away for 39 years

Let us see my brother after being away for 39 years 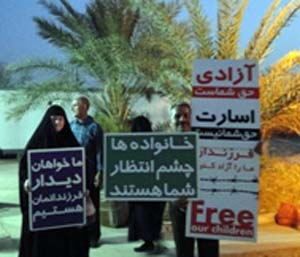 meeting on the ” massacre of Iraqi Kurds by MKO”