I am a witness to the terrifying crimes of Mojahedin Khalq

I, Mehdi Khoshal , am the former member of PMOI( People’s Mujahidin Organization of Iran).
During ten years of my close participation with PMOI,I had been witnessing the breach of human rights as well as terrifying crimes which are unbelievable for some people. 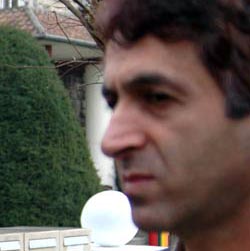 After passing ten years of my life in close cooperating with PMOI which its primary objectives were completely different than its present goals , I had a chance to separate from them (PMOI) in 1991,by passing through the prison , exile and leaving two members of my family behind as hostage in that cult. After leaving Iraq, I went to Turkey and finally I reached to Germany where I began my enlightening political activities. I would like to inform you the following facts which substantiate their inhumane and apolitical behaviors and activities.

As you are well informed, at the beginning of April 2011, there was a bloody conflict and clashes between the stranded members of PMOI and the Iraqi soldiers in Camp Ashraf. Many people were killed and hundreds of them were severely wounded. This is not the first time or the last which pmoi sending its brainwashed members to be killed without gaining any military achievement. These lives were wasted towards their political objectives and stabilizing their political situation. Everybody knows that pmoi is an unwanted guest in Iraq, who were cooperators of the former dictator of Iraq. They do not want to leave Iraq without bloodshed and carnage and they do not want to pay the price peacefully just because they had a bloody past in Iraq against Iraqi and Iranian people and their own members. They want to beget more conflict and more bloodshed by begetting more clashes with Iraqi soldiers to justify their resettlement, and begetting more violence and conflict is their only effective solution.

I would like to draw your attention to the following facts of their activities which I witnessed them while I was in pmoi.

2. Separating the children from their parents and forcible and collective divorce in their organization in pretext of accelerating their struggle against Iranian government, but everybody knows what was behind all those excuses and inhumane and cultic activities. The leader of this cult with his egoism suppressed women and men inside the organization and he was abusing the divorced women and was taking advantage of all those so called internal ideological revolution towards his personal desires and needs.

3. Making prisons and omitting physically as well as exiling of the dissidents and begetting different kinds of physical and psychological tortures , utilizing brainwashing and religious indoctrinations as well as ideological insults towards the stranded members were all tools which he could have all his cult’s members under his surveillance and supervision. In this regard he did not allow his members to have any contact with their family and loved ones for decades and he believes that all his members‘ families are mercenaries of Iranian government and he counts them as his enemies. He threatened them and the separated members that if someday he comes to power , he will revenge and retaliate from his dissidents and their families.

4. During recent years , hundreds families of those stranded members of pmoi ,who are in Camp Ashraf ,have been waiting to see their loved ones and have a conversation with them after decades , but unfortunately the leaders of pmoi do not allow them to see their loved ones and instead they insult those families who are mostly elderly parents and they call them the mercenaries and agents of Iranian intelligence service.
5. According to the facts mentioned above, I urge you to instruct your honorable representative in Iraq to investigate the inhumane activities which mentioned above specially investigating the truth of the bloody conflict which happened recently inside Camp Ashraf as well as forcing the leaders of pmoi to allow their members to meet their families and loved ones who are waiting and picketing behind the gates of Ashraf .

Your Excellency , Mr. Ban Ki Moon
There is a possibility that you have been informed and you have heard about the PMOI inhumane activities and the breach of human rights in their cultic relations. All their internal relations has been controlled and supervised by cultic methods. As you know the cults for reaching to their political objectives and their desires which are totally against the people’s interest and against the society, are ready to do whatever they can implement to reach to their inhumane objectives even if it is against their own members’ interests and the people .
The leaders who live secretly without having any communication with people and they evade from any response about the root and the nature of their activities to their members and people, because they put themselves on the God position and they beget more victims for reaching to their goals and their desires and inhumane objectives. The victims who are everywhere specially in Iraq and Iran.

Your Excellency, Mr. Ban KI Moon
Today we are witnessing the intellectual and rational uprising of the Middle East people for their rights and freedom. The people who have been living centuries under tyranny and suppression and repression and exploitation , now they want to free themselves and their children from all those tyrannies and suppressions and exploitations and they want to have their freedom back with respect to the international laws and human rights. While the people of Middle East and Arab nations are uprising for their freedom and democracy in their lands, you should not allow a terrorist organization which is ruled by cultic regulations conceal itself behind all those popular uprisings in other countries in the Middle East. You should not allow this terrorist cult ,which utilizes the slogans such as freedom and democracy to cover its real entity , to take advantage of those popular uprisings. In their internal cultic relations the story is completely different than their slogans. This cultic organization with its bloody past ,full of violence and with its unlawful presence on Iraqi soil has concealed itself behind the popular uprisings in other countries . You should not allow such a terrorist cultic organization with such a terrifying past utilizes those popular slogans ,freedom and democracy, to open its way towards political power.