Many faces of Masoud Rajavi and his supporters 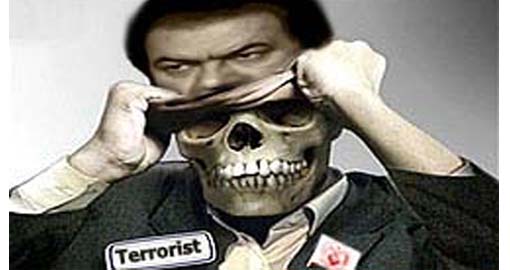 Lack of ideological consistency in certain politic men causes smacks of corruption. This is one of the main reasons to describe the Mujahedin Khalq Organization as hypocrites who have changed many faces since the establishment of the group. Supporters of such a group seem to own the same factor –hypocrisy—in their carrier.

As an anti-Shah anti-imperialist group the MKO supported the Islamic Revolution in Iran embracing the revolution leader Ayatollah Khomeini. The leader of the group, Massoud Rajavi turned against the newly-established government of Iran and sided with the enemy fighting his country, Saddam Hussein. After a decade of serving Saddam Hossein to suppress the uprising of Iraqi Kurds and Shiites, the collapse of the land lord in 2003 made Massoud Rajavi to sell his cult-like group to American military. Since then, the MKO –that was once an anti-America armed group—has shifted to a pro-American cult that lobbies in the US government paying large sums to US politicians in order to run its regime change agenda.

It is not surprising that those well-paid politicians who embrace the MKO have at least one characteristic in common with the group: they both change many faces just to run their goals. For them, the ends justifies the means. Howard Dean sounds to be one example of these politic men whose “ends” include the money he receives from different lobbies.

According to a report by Lee Fang on the Intercept, Dean who has been a longtime supporter of a single-payer health care plan has changed tune. Lee Fang states, “This evolution of Dean, known within many circles for his spirited critique of the Iraq War during the 2004 Democratic primary, comes as he has settled into a corporate lobbying career.” [1]

“ In his new career, he has helped drug companies maintain monopoly power, reversed his old positions on Medicare prices, and worked to undermine a critical component of the Affordable Care Act,” The Intercept’s correspondent describes Howard Dean’s shifting ideas. “ Though known for his anti-war rhetoric in 2004, Dean has accepted money from Mojahedin-e Khalq, an extremist group seeking regime change in Iran and has criticized President Obama’s negotiations with Iran.”

As an alleged democrat figure who opposes military action, he was an MKO agent in the US Congress to obstruct negotiations with Iran. Lee Fang introduces Dean by this subtitle “Paid by Iranian extremist group, bashing Iran negotiations”. He states Dean’s greed to receive the MKO’s money. ”In 2011, the Wall Street Journal reported that Dean was receiving speaking fees from the group,” He writes. “Around that time, Dean began vociferously arguing on behalf of the MEK, even though he conceded that he had known little about the group before joining its cause.”

Fang describes the MKO’s violent substance in this paragraph to reveal the extent the group supporters are misled:

“The Mojahedin-e Khalq, an exiled Iranian group that has attempted for years to overthrow the government of Iran, paid Dean to help in its campaign to be delisted as a U.S.-recognized terrorist group. That year, Dean traveled along with other paid MEK supporters, including Rudy Giuliani, to appear in Berlin with the group and demand that Western nations recognize the MEK leader Maryam Rajavi as the president of Iran. In addition to carrying out a campaign of terrorism against Iran, the MEK helped Saddam Hussein after the Gulf War crush rebellions in Iraq’s Shiite and Kurdish communities. “Take the Kurds under your tanks, and save your bullets for the Iranian Revolutionary Guards,” Rajavi once said.”

Brainwashed and/or bribed by the MKO, “Dean came out against President Obama’s policy of engagement with Iran, declaring that the U.S. negotiations failed to account for the interests of the MEK”. Last year, he criticized Secretary of State John Kerry and President Obama “far, far too eager for a deal with Iran.”

But, It seems that Howard Dean is “far, far too eager” for money, just like his contributor Massoud Rajavi. Logic, morality and even politics are of no value for these people. What pushes them forward is their ambitions to reach their goals. No matter how immoral and inhumane are their goals.

Fang, Lee, Howard Dean Says He’s Not a Lobbyist But He Sure Acts Like One, the Intercept,

Why do they call Rajavi, Pol Pot of...

The MEK former member: Rajavi is an Iranian...

Massoud Rajavi offered his own gun to the...

Massoud Rajavi should be convicted as Lubanga was