Recent suicide attacks in Belgium capital, a park in Pakistan and a stadium in Iraq have resulted in dramatic loss of lives. All attacks were operated by the extremist terrorist suicide bombers who left their own life behind to take the lives of a large number of innocent people.
What makes a person to commit a suicide bombing?

To understand the motives behind suicide bombing many people try to excuse or approve it. It seems easier to assume that suicide bombers are just malicious characters who hate their victims but terrorism is not a simple phenomenon with easy explanations. Actually a wide variety of motives and factors are involved. For analyzing these motives and factors the Mujahedin khalq Organization (the MKO) is a significant example of such terror acts. The group may be one of the first role models of suicide bombers for extremists through the history.
One may also think that suicide bombers are crazy or psychopathic or that they lack moral feelings but most terrorists are not psychologically deviant and do not operate outside the normal rules of behavior, but are instead ordinary people from ordinary backgrounds. A glance at personalities of current and former members of the MKO indicates that the majority of them are from average Iranian families with religious or/ and honorable backgrounds.  Most of them are smart, university educated individuals with intellectual tendencies.
Nonetheless, the crucial point about them is that they believe that their violent actions, while somewhat regrettable, are justified and noble. Moreover, their emotional commitment to their cause and their comrades and particularly their leader is revealing of normal human psychology. Often their actions do not ultimately stem from hatred, but rather from love of their leader and from absolute obedience to the orders of the leader. But, how leader can convince such people to commit the most atrocious acts?
In case of the MKO, in better words “the Cult of Rajavi”, the leader Massoud Rajavi manipulated his rank and file with a very complicated methodology of indoctrination. Massoud’s followers were indoctrinated that killing the innocent is inevitable consequence of fighting for the cult’s cause. Members of the cult of Rajavi were manipulated that these missions were the only way to fight for their leader. They were then glorified as martyrs.
Although the realization that MKO terrorists view themselves as soldiers engaged in a just war does not legitimize their cause or methods, it does provide some insight into their motivation. The MKO’s history is overwhelmed with suicide bombings, self-immolations and swallowing cyanide capsules just because these acts were wisely indoctrinated in the minds of members. 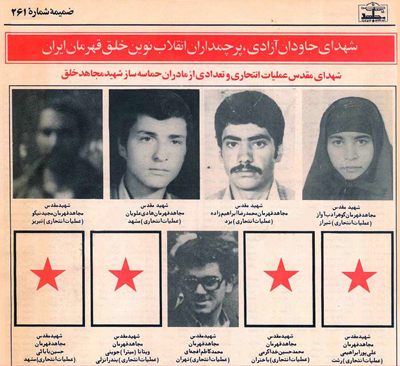 After the 1979 revolution in Iran, when the MKO began to fight the newly established Islamic Republic government, the MKO suicide bombers assassinated dozens of the Iranian officials and civilians. The suicide bombers were glorified in the group’s journal as suicide martyrs.
More than two decades later, suicide was repeated in the MKO history in a much more horrifying form:  self-immolation. Following the arrest of the group’s co-leader Maryam Rajavi by the French Police, a dozen of the cult followers set themselves on fire in European cities to protest the arrest of the co-leader. These horrific acts in the heart of Europe revealed one important issue: The MKO is a destructive cult of personality. Self-immolators showed that they do not follow their leaders but they worship them. This was the very consequence of Massoud Rajavi’s methodology in his modern slavery.
Today, the IS and other extremist groups should be watched and destroyed but groups like the MKO seems to be more threatening because they freely have bases in Europe with hundreds of brainwashed slaves who are ready to scarify themselves for their leaders despite the group’s propaganda for human rights and democracy.
Mazda Parsi