Victoria Cayzer and Laura Hue-Williams have not had anything to do with their families since they were psychologically manipulated by a self-styled “spiritual healer”, Anne Craige. The two distressing parallel cases of two sociable girls were recently reported by the Daily Mail. Eventually, parents of the girls together with certain authorities are campaigning for a change in the law to make psychological manipulation and mental abuse a crime, according to the Mail. [1] 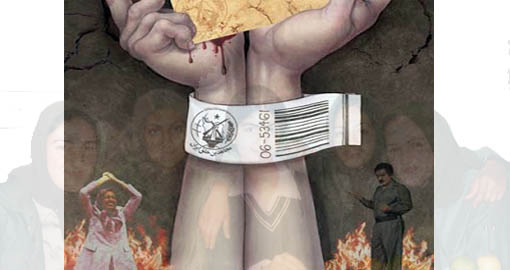 Children in destructive cults belong to the leader, with all members of the group considered their “family,” and the leader, their father or mother. The Mujahedin Khalq Organization (the MKO/ the Cult of Rajavi) is a notoriously known example of such destructive cults that indoctrinate children to leave their parents behind and to yield themselves to the leaders’ ambitions. Somayeh Mohammadi was 17 when she left her family in Canada for Camp Ashraf, Iraq to receive military training with the Mujahedin Khalq Organization (the MKO).

Somayeh was a Canadian and American teenager who was deceitfully recruited by MEK and sent to Camp Ashraf, where she was trained for guerilla fights and forced to stay inevitably. In an independent letter sent to the Canadian embassy in Jordan, Somayeh asked for the Canadian government’s help to get her back to Toronto. Later however, she was forced by MEK in a court hearing to denounce her family and state that she wants to stay with MEK, according to a documentary made by CBS Television in 2006. [2]

Somayeh’s father, Mustafa was a faithful supporter of the MKO himself for more than 30 years. He encouraged his daughter, Somayeh, to join the group in Iraq at their training camp for a few months training but the passage of time, and the confinement of his daughter for years in the Cult of Rajavi (the MKO), caused Mustafa to lose trust in Masoud Rajavi and his cult-like group. Now, He is deeply concerned about his daughter, her future and safety. So he has continued his quest in international bodies and his multiple journeys to Iraq and the group’s headquarters in Paris to get his daughter back.

Yet, Mustafa is not alone. The number of children who were recruited by the MKO cult is countless and the years that their parents haven’t seen them mount to over a decade. Every now and then, there are reports on families who have picketed in front of the MKO’s camp near Baghdad. But, they are not allowed by the MKO leaders to visit their loved ones who are taken as hostages in the camp.

The list of young and teenage recruits who were tricked to join the cult of Rajavi include a large number of children of the group’s members who were once separated from their parents and had been sent to Europe or those adolescents who had left Iran to immigrate to Europe seeking job and a better life but they were kidnapped by the MKO recruiters in third countries especially Turkey.

Very few children of the MKO members were lucky enough to get rid of the MKO cult-like system. Hanif Bali, the Iranian Swedish parliamentarian whose parents were MKO members, was sent to Sweden when he was only three but later on he decided to never get back to the group’s camp in Iraq. “I was lucky that I didn’t get back to Iraq”, he says.  ”If I had accepted to join the group at that day, I would have been in a camp in the midst of war, in the midst of misery.” [3]

No matter why and how they joined the MKO, they are now kept under a severe mind control system that indoctrinates them to forget their family, friends and normal life. According to the Daily mail, both British families who are now campaigning to release their daughters from cult abuse, have not seen their loved daughters for a few years. However, the British Prime Minister is supporting them in their efforts to get their children back to the family. ”David Cameron is backing a campaign for new laws protecting vulnerable adults from control or slavery by predators, including therapists,” reported the Mail. ”Justice Secretary Michael Gove and Cabinet troubleshooter Oliver Letwin are examining how to clamp down on psychological manipulation and abuse.” [4]

As a matter of fact, cult indoctrination and psychological manipulation and its perils are not restricted to British boundaries and British families. Definitely, the UN and other international human rights bodies should also be considerate enough to listen to many families who have been suffering grievously since their children were abducted by the Cult of Rajavi.

So far, the UN and its supporters have turned blind eye on numerous letters and petitions written by families of the MKO hostages. The Mujahedin khalq Organization and its affiliates should be considered by the international bodies as destructive cults and its leaders should be brought to justice for the crimes the committed against humanity.

[1] Joseph, Claudia, The cruel agony of losing our gorgeous girl to the spell of her ‘spiritual healer’ guru: Artist daughter cuts family out of her life after getting close to ‘therapist’, The Daily Mail , April 30, 2016

[4] Joseph, Claudia, The cruel agony of losing our gorgeous girl to the spell of her ‘spiritual healer’ guru: Artist daughter cuts family out of her life after getting close to ‘therapist’, The Daily Mail , April 30, 2016