The role of MKO Terrorist organization in the suppression of labor and student protests In France! 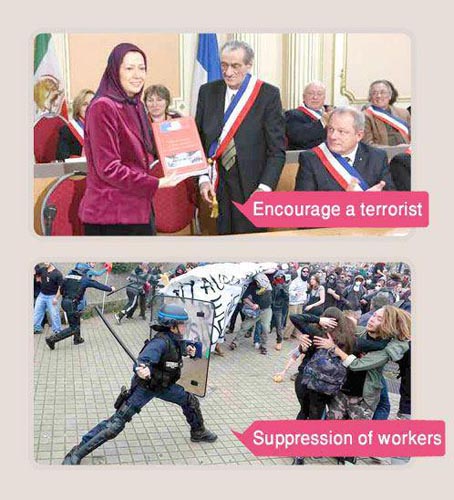 with records full of multiple crimes including association with aggressive dictator Saddam Hussein’s government in Iraq to participate in the suppression of the uprising in Basra and receiving permission to march in the streets of Baghdad, tragic suppression of Iraqi Kurds, receiving 30 thousand of hectares of agricultural lands for the expansion of Camp Ashraf, and above all of them, involvement in killing of Iranian people which according to their own admission killed more than 50,000 innocent people, has now placed its main headquarters in Auvers-sur-Oise, Paris, France.

Meanwhile, even with the covert movements in France and even Europe the MKO puts the information from the students and labor protests of the French people at the disposal of intelligence services so that the police were able to avoid the presence of protesters in the streets faster, According to available records they may also directly cooperate with the police crackdown on student protests In exchange for certain advantages.

After three month of rebellion in Paris, by hiring some travel agencies as tourism from Central Asia and also few fans in Europe Rajavi’s group add some new members to their wild organization’s for Maryam Rajavi’s speech on July 9 in Paris.

Shouldn’t people and fighters of justice for laborers be aware of cooperation between Rajavi’s criminals and French police?

Do you think it is the right of the people of Paris to know that, there are criminals in their neighbors who would use any nation and person as a bait to achieve their purposes?

The people of Iraq carried out various protests against this terrorist group which led to violence, it is necessary for French protesters to be aware of these undemocratic dirty work that is remained of the Saddam Hussein’s dictatorship, they should know that their taxes are spend on crackdown of the French youth and binge of leaders of the terrorist organization of MKO (the hypocrites).

Isn’t it time that this group of spies and anti-people be expelled from France due to the recent terrorist acts in Paris to make people feel more secure.