Acting as Saddam’s Private Army, the Mujahedin Khalq Organization have actively participated in the war which Saddam Hussein waged against Iran between 1980 and 1988, engaging themselves in intelligence gathering for the Iraqi army as well as participating in joint operations with them”, the former MKO members said.

Moreover, the Mujahedin, as part of Saddam’s military establishment, played a decisive role in the suppression of the internal uprisings in Iraq in 1991, and are responsible for the massacre of many Iraqi Shiites and Kurds who opposed Saddam. The best documented of these being the massacre of the Kurds in their uprising in March 1991”. 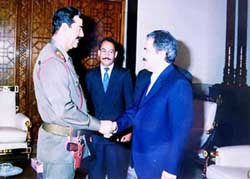