Ms. Sanjabi, a former member of the MKO’s Women Leadership Council shared her experiences of living within 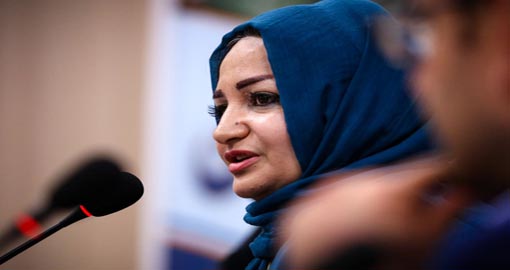 the cult camps. The Memoirs of Ms. Sanjabi has recently been published in a Book called” Sarab-e Azadi” – the Mirage of Liberty. The Book is in Persian and covers Ms. Sanjabi’s 25 years of living within the MKO Cult affairs.

Having lived under severe pressure of cult manipulation for many years, Ms. Sanjabi surrendered herself to the Iraqi forces deployed near the Camp Ashraf gate in 2011.

Participating a press conference in the Iraqi Defense Ministry at the time, Ms. Sanjabi said:

In an interview with Neday-e Haghighat Website last week , the former member of MKO’s leadership Council exposed the Saudi financial support for MKO at the collapsed Saddam era.

She talked in detail about Massoud Rajavi’s clandestine visit to Saudi Arabia ostensibly for Haj which the MEK later were forced to admit to. Then, after the First Gulf War, Rajavi received three lorry loads of gold bars and jewelry which was brought to Iraq from Saudi Arabia. The MEK took it bit by bit to Jordan and sold it there. At that time Malek Abdullah was Crown Prince and he was in charge of the MEK and Saddamists. He gave his support for these financial transactions. Sanjabi explains further that Daesh is not a new phenomenon but is a continuation of this coalition of forces.[1]