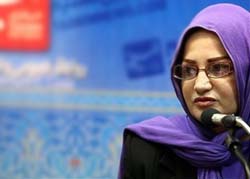 International Women’s Day is annually held on March 8 to celebrate women’s achievements throughout history and across nations. It is also known as the United Nations Day for Women’s Rights and International Peace. However, this day is a time for certain opportunists who abuse the term “Women’s Rights” despite their long history of atrocities against women.  Leaders of the Mujahedin Khalq Organization – who apparently seek equal rights for women- are actually huge abusers of women’s rights.

There are numerous reports and testimonies on human rights violations committed in the MKO. The most recent one is published in a book by Ms. Maryam Sanjabi. She writes her firsthand account on grieves of living in the Cult of Rajavi in her book “The Mirage of Freedom”.

Maryam Sanjabi joined the MKO in 1986 after her brother — also an MKO member – was executed by the Islamic Republic. Maryam was promoted to a high-ranking member in the MKO’s hierarchy until authorities suspected her of being the agent of the IR. “in 1994, after 8 years of working 18 hours a day for the organization, I could never imagine I was suspected by the leaders,” she writes.

When she was summoned to Camp Ashraf for interrogation, she was not worried because she thought that it was a misunderstanding and eventually it would be resolved but nothing went on as she expected.

“After the iron gates of Camp Ashraf was closed behind me, they took me off the car while beating me and insulting me,” she narrates her gloomy story.

They closed her eyes and tied her hands and threw her to a room where five other women were jailed. Maryam was shocked, she could not think of anything and do anything except crying. ”I could not believe that the organization that I had chosen with love as my ideal was treating me like this”, she writes.

She was then interrogated by Fatemeh Kheradmand who accused her of being the Iranian government’s agent. Sanjabi protested against the unjust accusation but she was punished physically. She was jailed in solitary confinement. She was lashed on her hands and feet until she passed out… She spent a dozen days under the harshest tortures.

“They made me bow in front of a wall for hours, until I felt nauseous, I vomited and again they forced me to bow”, she describes the tortures she endured in the MKO’s prison.

Maryam’s body was awfully wounded, blued and swollen when the MKO authorities took her to Baghdad. There, she was treated rather normally. This was the start of a new indoctrination process. They showed her new films of Maryam Rajavi’s speeches in Paris on a new devious titled “individuality”. Based on the new program, all members had to allegedly confess all their problems and secrets before joining the organization. They had to criticize themselves for their so-called dishonesty.

New meetings were held for the lately planned manipulation system. ”I realized that meetings were held in a violent atmosphere in which all members were humiliated by verbal and physical attacks from the peers,” she writes. Self–criticism meetings were planned to terrorize members’ individuality and personality.

By the way, Maryam  Sanjabi was then taken to Massoud Rajavi’s residence. This was a trial for her. According to Massoud Rajavi, Maryam Sanjabi’s charge was spying for Iranian government. Following Sanjabi’s protest against the accusation, Massoud Rajavi told her, “You may be right but you might have been deceived by your brother so we will search to find out if you are a spy or not”!

After a few months, Rajavi talked to the accused member by phone and said,” Congratulations! We got sure that you were not a spy”!

This story was the story of human rights in the cult of Rajavi. In this destructive cuklt, the process of trial is vice versa. First you are punished, then you are sent to prison and torture, then you are charged with your accusation and then you are proved to be innocent!

It may seem ridiculous but it is definitely a dark comedy. According to Ms. Sanjabi at least 100 women and 500 men in the MKO suffered the same process she endured just under the false pretext of being Iranian agent. “During the days of my imprisonment in the first jail, I could always hear sisters’ [female comrades] cries of pain calling for help,” She reveals.

Therefore, the International Women’s Day is an opportunity to hear the calls of help from inside the camps of the Mujahedin Khalq, in Iraq, France and Albania. It’s time to bring Massoud Rajavi – the fugitive leader of the cult – and his wife Maryam Rajavi to justice for the crimes they committed against humanity particularly against their female members. The International Community should beware of Maryam Rajavi’s propaganda about women’s rights!