The People’s Mujahedin of Iran- a ‘controversial’ political-militant organisation have ended up living in a compound just miles from Tirana, Albania. One day I was invited to attend a “human rights conference” there. Not knowing much about them and as a curious journalist, I accepted and set off, not having any idea of what to expect.

Located around 30 minutes drive from Tirana, the MEK compound is on the outskirts of the village of Manza. Rumour has it that the locals are not overly happy about their presence there, but the fact that the compound provides work for a number of them is enough to keep them at bay.

At the entrance to the camp was a carpark where a number of private guards with automatic weapons stood around chainsmoking with their guns slung over their shoulders. Two large gold-coloured lions flanked the gateway where a couple of MEK members sit, stopping anyone that tries to enter. 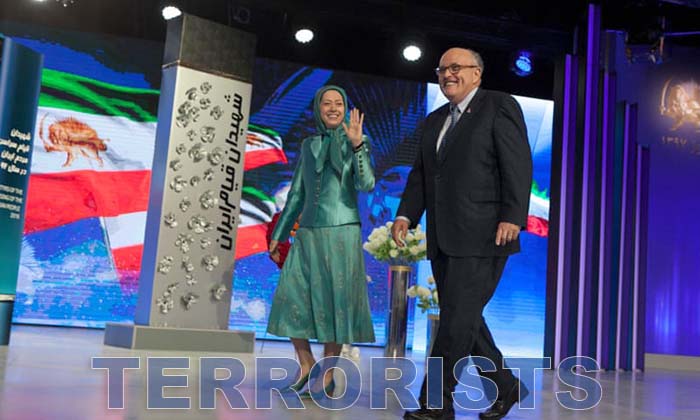 As the minibus pulled into the entrance, the private guards in their brown uniforms approached the vehicle with mirrors on the end of long metal poles. They spoke with the driver before using the mirrors to check the underneath of the vehicle for, what I assume, was bombs or similar devices. After getting the all-clear, we passed through the gate and disembarked in a small car park.

Ahead of us was along a road that disappeared over the top of the hillside. Iranian flags lined the route and a large, stone archway sat in the middle of the road with an even bigger flag hanging from it. To the right of the arch was a small tent where a different private security firm had set up scanners, metal detectors, and a station for searching everyone that wished to enter, Segregated into male and female stations, our bags were searched, we were patted down and scanned, and also made to pass through a scanner. 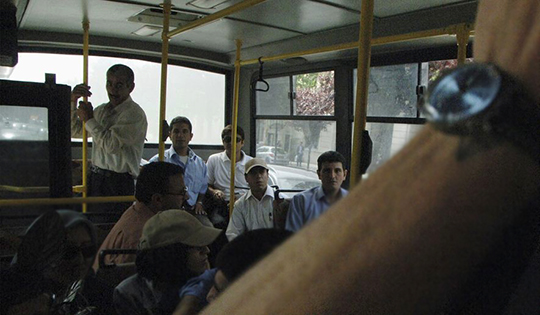 The security guard confiscated my lipstick, face powder, cigarettes, and lighter and put them in a plastic bag, advising me I could collect them afterwards. They tried to confiscate my mobile phone as well, but I argued that having a one-month-old daughter at home, I needed to be contactable. A male MEK member was called over and after pleading my case, I was allowed to take my phone inside on the condition I switched off the internet (I didn’t).

It was at this point that I began to feel nervous. The level of security was incredibly high, the searches were more thorough than at an airport, and I was concerned at the attempt to take my phone, as well as the temporary confiscation of something so seemingly harmless as a lipstick. 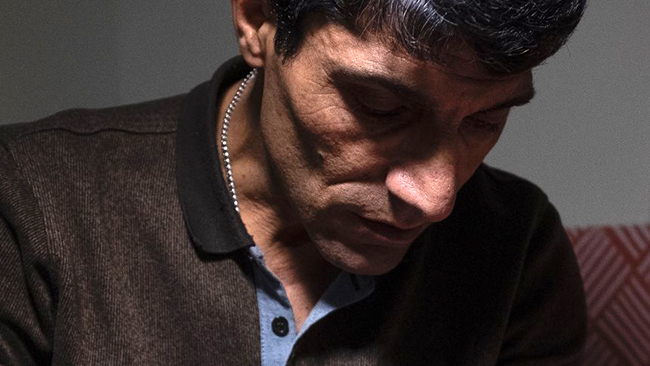 As I looked around, I also noticed the dress code that applied to everyone except the staff of the two separate private security firms.

I was greeted by a number of smiling, incredibly friendly women that shook my hand, kissed my cheeks and thanked me for attending. The majority of them were dressed in navy blue suits with burgundy hijabs, with no makeup and modest shoes. I noticed a small number of women who appeared to be much older than the others and assuming positions of more responsibility, wearing head to toe olive green- a suit with a matching hijab. The men were dressed in suits with shirts and no tie- they all seemed to have moustaches. Not one person was under 50 years old.

From the security checkpoint, we were herded into minibusses dependent on nationality and who invited us, and we started our descent into the “city”.

As we passed over the top of the hill, rows and rows of white, single-story cabins appeared below us. Each road we took had its own street name and each row of housing was complete with plants and flowers planted outside and even bicycles propped up, ready for use. The place was immaculate- little box houses on pristine streets and a small artificial river running through the centre. On what appears to be the main boulevard, Iranian flags lined the way, with a large memorial to those MEK members who lost their lives at one end, and what appears to be a sort of city centre at the other.

We pulled off the main boulevard and disembarked outside what looked like a large aircraft hangar. Guarding several entrances were more private security guards and more men with moustaches. As we file into the building, I had no idea what was waiting for me inside.

The room was vast- similar to an industrial warehouse in size and dimensions. Inside were perhaps 3000 people in seats stretching as far as the eye coul see. To the left of me was a stage, cordoned off and supervised by security guards. This stage was kitted out with an expensive-looking set including large screens with graphics of video footage of the MEK struggle interspersed with images of their leader Maryam Rajavi and the Iranian flag. A podium stood on the stage, next to a flagpole and flag, and in front of the words “FREE IRAN”.

Upbeat and patriotic sounding music pumped from the speakers and filled the room, drowning out the sound of delegates as they make their way to their seats. In the centre of the room were two columns of seating, male MEK members on one side, female MEK members on the other, completely segregated and each in their strict dress code, including hijabs for women. Again, no one was under the age of 50.

On the far right hand and left hand sides of these seating zones, sat the international delegates, segregated by nationality. Everyone was handed a headset and told to tune in to a particular frequency that would pick up the translations coming live from a line of translation booths on the right hand side of the room.

At the front of the room, the VIPs were sat in rows with tables in front of them, displaying the name and country of each delegate. I noticed the US, UK, France, Germany, and Saudi Arabia were all represented by between one and five individuals. They included politicians, ex-politicians and ex-security and military personnel. I was told that there were representatives from 47 countries present.

Large booms swung over head, each with a camera attached to it filming the crowd from a variety of angles. This was an expensive set up, reminiscent of a large scale TV studio.

The number of people in the room was quite staggering and to see the rows of people seated at the far end, I had to squint. Asides from the thousands that were seated, there were perhaps a hundred uniformed and hijabi wearing women scuttling around, seating people and handing out headsets. They were under the direction of a few men in suits and were amongst over 100 security guards.

As I waited to be seated, the chanting started and thousands of Iranian flags started being waved enthusiastically as the crowd got to their feet. The chanting and flag waving occured for several minutes, before they sat back down again- a pattern that repeated countless times throughout the event.

On my own at this point, I enquired as to where I should sit. Confusion ensues as I explain that I am English yet living in Albania and I was told to wait whilst they discussed what to do with me.

I was then approached by an older male MEK member holding a walkie-talkie who asked me who I was and what I was doing. I explained again and made the mistake of saying I am a journalist whilst flashing my press card. At this point, he became angry and said, “who the hell told you to be here?” I replied that I had been invited and that some of the ladies had told me to wait here whilst they decided where to seat me. He replied angrily “these ladies know nothing, I am in charge here”.

At this point, I became unhappy at being shouted at and I asked him to lower his voice and not to treat a guest in this manner. He walked off and eventually I was seated by a woman in a hijab, in the section for Albanians.

It was then, as I looked around I noticed that there were no other journalists present as I could not see any TV crews, no other people with press cards, no journalists I recognised, and I realised I hadn’t seen any media vans or cars in the car park. There was only the expensive video cameras and a couple of photographers who I believed were MEK members.

Then the show began.

MEK leader, Maryam Rajavi took to the stage amidst triumphant music, glitter cannons spitting out gold confetti into the audience, and the euphoric chants, flag-waving, and fist-pumping in perfect synchronicity of the uniformed, segregated, Iranian audience members.

Dressed in turquoise silk with a matching hijab, Rajavi smiled as she spoke, pausing only to enjoy the chanting and adoration from her followers. She captivated the crowd as she spoke of women’s rights, gender equality, democracy, human rights, and an end to the mullahs and ayatollah. To see the way that the crowd reacted to her was really something fascinating- they hung on every world, and jumped to their feet many times to chant and wave their flags ecstatically.

They referred to “the regime of terror”, the “murderers in Tehran”, and called for the immediate overthrow of the current Iranian government. MEK were called “freedom fighters” and hailed as the only solution to the current situation in Iran.

Guiliani also said that “European governments must stop supporting regimes that fund terrorism” calling for and end to any trade with Iran, stating that it funds “mass murderers”.

He also commented on the way that the compound had sprung up in just two years adding “if we tried to do this in New York, it would take 15 years and launch 14 corruption investigations.”

Addressing the allegations that MEK is a cult, he stated “maybe [these people] they forgot about honour and decency, human rights. This is a decent organisaton. A group we can support.”

Each speech was broken up by periods of coordinated chanting and flag-waving with each outburst as frenetic and enthusiastic as the one before.

I sat there for around two or three hours, not really sure what was going on or what the purpose of the event was. Feeling a little on edge, I got up from my seat and made my way to the exit. As I walked towards where I had disembarked the minibus, the woman who invited me called my name and came running over to me and presented me with a box of sweets and fruit. She asked me who I worked for and what I wrote (which was odd because I had never told her) and invited me to come back to the compound another time to discuss their work more.

I said my goodbyes and headed back to the entrance, passed the armed guards and moustachioed MEK members, and went back to Tirana.

Over the next few days, my contact and I exchanged a few messages where I said I would be interested in “one day” returning to find out more. She then proceeded to call me around 15 times, even when I told her I was not available ( I didn’t answer) and even from different phone numbers. I then politely but firmly declined any invitations and that was the last I heard from my friend at MEK.