The so-called election of the secretary general in the Mujahedin Khalq Organization (the MKO/ MEK/ the Cult of Rajavi) was once more a masquerade show to cover the true face of the group in the eyes of the outside world and at the same time served as a distractor for the minds of those individuals who are kept against their will inside the cult. 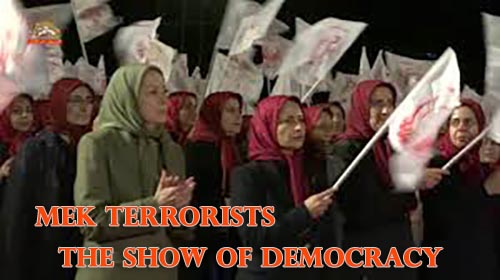 The approach adopted by the MKO in the so-called election is so ambiguous that no one can define the role of the elected secretary general and the differences between the authority of her and that of the disappeared leader Massoud Rajavi and even that of the alleged “president-elect” Maryam Rajavi. The election is seemingly a performance of democracy rather than an authentic act of democracy in the cult of Rajavi.

Actually the MKO meets all criteria of a cult of personality around the character of the Rajavis. In a cult-like structure, the establishment is founded on a dictatorship not a democracy. The regulations of a Cult of Personality is not based on elections and democratic principles but it is based on the absolute power of one single person, the leader on top of a hierarchy of senior members and the rank and file.

People in leadership positions in political arenas should be expected to always act in accordance to the rules of the establishment, and to the principles for which democracy is supposed to stand, and should never use their fame and public image as an item to create the illusion they are behaving morally, ethically, and in a principled manner, while doing the exact opposite. Maryam and her disappeared husband Massoud Rajavi are the only ones in the MKO hierarchy that do not obey the rules of the group. They are idols that their “virtues” are constantly repeated for their followers.

The Rajavis were married while mandatory celibacy was the rule all members of the group had to obey. They were able to have relationships with the other sex while the rank and file had to live separately, even the gas station in Camp Ashraf was scheduled to be used by men and women in different hours of day. Maryam Rajavi is the only women in the Cult of Rajavi who can choose her clothing by her free will. She is usually seen in a variety of colors while other female members are supposed to wear uniforms, and Hijab is obligatory…

Thus in such an undemocratic structure, election is mockery.  The absurdity of such an election is also understood in the type of the process by which Zahra Merikhi was elected. This is the election process described by the MKO’s own website: “In the first such assembly on Aug. 20, an initial 12 candidates were introduced, of whom four reached the next stage, with Merrikhi receiving a majority of the votes. At the second assembly two weeks later, senior MEK officials and cadres cast their ballots for the final four candidates, with Merrikhi leading the vote tally again. At the third and final assembly last Wednesday, all members raised their hands and unanimously elected Merrikhi.”

According to the group’s media in the first phase of the elections Merrikhi has received “a majority of the votes”. Some sources of the group say 86 percent. This means that she has not had the 100 percent approval of the whole members, regarding that the two first phases of voting were held with ballot boxes and the voters have had their private votes so it was natural that some of the rank and file dared to state their opinion against Merrikhi. The third and final assembly was like a joke where “all members raised their hands and unanimously elected Merrikhi”. The Cult of Rajavi implies that not even one single person had an absentee vote let alone a vote against the “elected” secretary general!

Ludicrously, the group propaganda journalist Majid Rafizadeh claims that the Cult of Rajavi “enjoys prowess and cohesion to elect a new secretary general”. Rafizadeh who seems to be so excited about the alleged elections in his cult, as an extra-ordinary phenomenon, boasts, “In short, Iran’s opposition election demonstrates process, structure, depth of leadership ranks and a genuine and practical commitment to gender equality, especially in leadership positions.” Mr. Rafizadeh should be told that the cohesion that the MKO enjoys is absolutely originated in the coercive indoctrination system of the Cult.

Actually, commitment to gender equality is a tool to ensure an environment that supports social justice to empower women in the society. Women in the Cult of Rajavi, isolated from the free world, deprived from marriage and having child, deprived from choosing their life style, their type of clothing and many other basic rights of a human being, miss the least support that ensures social justice for them.

As a matter of fact, personality cults are dangerous and detrimental to democracy. The recent show in the MKO’s headquarters in Tirana, Albania was called by Maryam Rajavi “as a brilliant election, embodying the height of democracy, cohesion, and growth in the PMOI” but it was indeed just a democratic gesture for the outsiders and an entertainment for the insiders.