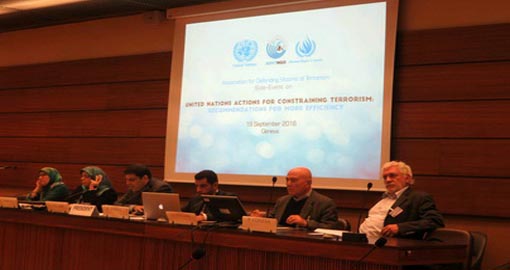 Iran took the complaints of families of victims of terrorist operations carried by Mujahedeen Khalq Organization to the United Nations Human Rights Council in Geneva.

During the 33rd session of the Human Rights Council, the Association for Defending Victims of Terrorism (ADVT) called for the realization of human rights of victims of terrorism.

ADVT said that cultural campaign must be initiated to uproot terrorism in the world.

The Iranian Association for Defending Victims of Terrorism raised the slogan of ‘The terror victims, the biggest impressive potential to fight terrorism’ in a series of meetings with senior officials of the United Nations, Non-Governmental organizations (NGO) and the governments’ representatives in the Human Rights Council.

The ADVT delegation held a panel on the subject of UN responsibility to curb terrorism; recommendations for more efficiency in which human rights experts and activists considered major role of the UN must unertake in the international campaign against terrorism.

According to the Association for Defending Victims of Terrorism, the major proposals raised during the panel were the UN must prevent granting asylum to terrorists, the UN’s clear reaction to condemn terrorist acts and take the criminals involved in terrorism to the courts of justice by the governments of the UN member states.

The 33rd session of the Human Rights Council is underway in Geneva, Switzerland.