The best-known exiled opposition group is the Mojahedin-e-Khalq Organization (MEK), also known as the People’s Mojahedin Organization of Iran (PMOI). Secular and left-leaning, it was formed in the 1960s to try to overthrow the Shah of Iran and has been characterized by U.S. reports as attempting to blend several ideologies, including Marxism, feminism, and Islam, although the organization denies that it ever advocated Marxism. It 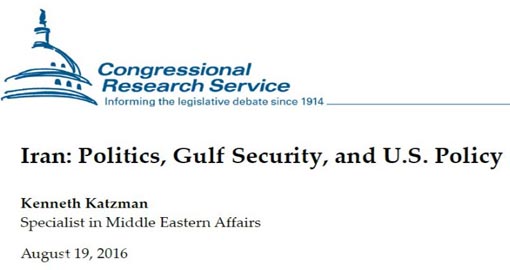 allied with pro-Khomeini forces during the Islamic revolution and, according to State Department reports, supported the November 1979 takeover of the U.S. Embassy in Tehran. The group was driven into exile after it unsuccessfully rose up against the Khomeini regime in September 1981. It has been led for decades by spouses Maryam and Massoud Rajavi but in 2011 Ms. Zohreh Akhyani was elected as MEK Secretary-General. Maryam Rajavi is based in France but the whereabouts of Massoud Rajavi are unknown.

The State Department designated the PMOI as an FTO in October 1997—during the presidency of the relatively moderate Mohammad Khatemi. The NCR was named as an alias of the PMOI in October 1999, and in August 2003, the Department of the Treasury ordered the groups’ offices in the United States closed. State Department reports on international terrorism for the years until 2011 asserted that the members of the organization were responsible for: the alleged killing of seven American military personnel and contract advisers to the former Shah during 1973-1976; bombings at U.S. government facilities in Tehran in 1972 as a protest of the visit to Iran of then-President Richard Nixon; and bombings of U.S. corporate offices in Iran to protest the visit of then Secretary of State Kissinger.

The reports also listed as terrorism several attacks by the group against regime targets (including 1981 bombings that killed high ranking officials), attacks on Iranian government facilities, and attacks on Iranian security officials. However, the reports did not assert that any of these attacks purposely targeted civilians. The group’s alliance with Saddam Hussein’s regime in contributed to the designation, even though Saddam was a U.S. ally during 1980-90.

The PMOI challenged the FTO listing in the U.S. court system and, in June 2012, the Appeals Court gave the State Department until October 1, 2012, to decide on the FTO designation, without prescribing an outcome. On September 28, 2012, maintaining there had not been confirmed acts of PMOI terrorism for more than a decade and that it had cooperated on the Camp Ashraf issue (below), the group was removed from the FTO list as well as from the designation as a terrorism supporter under Executive Order 13224. However, State Department officials, in a background briefing that day, said “We do not see the [PMOI] as a viable or democratic opposition movement…. “

The NCR-I reopened its offices in Washington, DC, in April 2013. The State Department has been meeting with the MEK since its removal from the FTO list, including in Iraq.

The de-listing of the group has not resolved the situation of PMOI members in Iraq. U.S. forces attacked PMOI military installations in Iraq during Operation Iraqi Freedom (March 2003) and negotiated a ceasefire with PMOI elements in Iraq, according to which the approximately 3,400 PMOI members consolidated at Camp Ashraf, near the border with Iran. Its weaponry was placed in storage, guarded first by U.S. and now by Iraqi personnel. In July 2004, the United States granted the Ashraf detainees “protected persons” status under the 4th Geneva Convention, although that designation lapsed when Iraq resumed full sovereignty in June 2004. The Iraqi government’s pledges to adhere to all international obligations with respect to the PMOI in Iraq has come into question on several occasions: on July 28, 2009, Iraq used force to overcome resident resistance to setting up a police post in the camp, killing 13 n residents of the camp. On April 8, 2011, Iraq Security Forces killed 36 Ashraf residents; the State Department issued a statement attributing the deaths to the actions of Iraq and its military.

In December 2011, the Iraqi government and the United Nations agreed to relocate Ashraf residents to the former U.S. military base Camp Liberty, near Baghdad’s main airport. The relocation was completed by September 17, 2012, leaving a residual group of 101 PMOI persons at Ashraf. The group asserted that conditions at Liberty are poor and the facility is unsafe. On February 9, 2013, the camp was attacked by rockets, killing eight PMOI members; the Shiite militia group Kata’ib Hezbollah (KAH) claimed responsibility. A rocket attack on the camp took place on June 15, 2013. On September 1, 2013, 52 of the residual Ashraf residents were killed by gunmen that appeared to have assistance from Iraqi forces. Seven went missing. All survivors of the attack were moved to Camp Liberty, and Ashraf has been taken over by Iran-backed Shiite militias. An October 29, 2015, rocket attack on the Camp killed 24 residents and a rocket attack on July 4, 2016, did not kill any residents, but wounded some. The FY2016 National Defense Authorization Act (P.L. 114-92) calls for “prompt and appropriate steps” to promote the protection of Camp residents.

Since 2011, the U.N. High Commission for Refugees (UNHCR) has sought to resettle PMOI members outside Iraq. About 600 have been resettled so far: 450 to Albania; 95 to Germany; 95 to Italy; 15 to Norway; and 2 to Finland. The United States reportedly might resettle 100 or more, but the U.S. requirement that those resettled disavow the group has apparently held up implementation of that program. About 200 have returned to Iran; a few of them reportedly have been imprisoned and/or mistreated.