Following last week’s chemical attack in Syria and President Donald Trump’s retaliating missile strike, the Mujahedin Khalq Organization ( the MKO) could not conceal its pleasure to see the United States’ involvement in the Syrian battle. 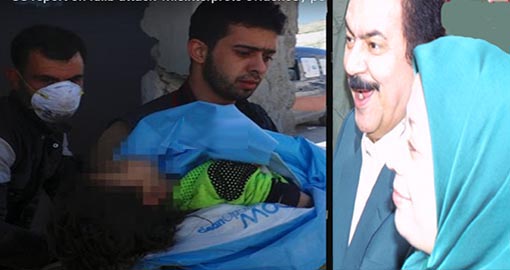 There are allegations among bloggers and political leaders that the toxic gas attack on April4 in Khan Sheikhoun, Idlib was a “false flag” operation designated to trigger American involvement in the country’s civil war. However, supposing that Assad has attacked his own people with chemical weapons, the MKO leaders should be asked some essential questions.

About three decades ago, Saddam Hussein – the then military and financial sponsor of the MKO- attacked his own people in Kurdish areas in the North of Iraq and the people in the Western town of Iran, Sardasht. While those chemical attacks at the time, were much more catastrophic than the one in Khan Sheikhan, the MKO not only didn’t condemn Saddam Hussein for the chemical attacks against civilians but also it cooperated with him to suppress more Kurds as well as Shiite uprisings.

Double standards of the MKO leaders is clearly demonstrated in their biased position taking about Syrian civil war while the Iranian foreign Ministry condemned “any use of chemical weapons, regardless of who has used it or who are the victims “ immediately after the incidents on April 5th, according to the Reuters.

Definitely, hypocrisy has always been an iconic feature of the MKO cult. The massacre of children in Idlib and previously in Halab is a matter of focus in the MKO propaganda while the starving and massacred children of Yemen has never been broadcasted in the group’s propaganda media. Humanity is not an issue for the MKO opportunists, they just turn into human rights advocates whenever they find it beneficial for their own propaganda.

In case of Syria the MKO supports Trump’s missile attacks because it is highly motivated by its anti-Iran paid – sponsors at the Trump’s administration – such as John Bolton and Rudy Giuliani and etc.

In contrast, the case of Yemeni children is not a matter of importance for the MKO because they are victims of Saudi Arabian aircrafts! In fact, after the collapse of Iraqi dictator Saddam Hussein, Saudi Arabia has been the top financial sponsor of the MKO in the region. Moreover, as the Saudi prince Turki Al- Faisal declared in the group’s propaganda show, Saudis also want the overthrow of the Iranian government.

Chemical attacks on civilians in Khan Sheikhun provided a pretext for the enemies of Iran as well as Syria, instead of being a warning mark for all sides of the battle to end up the war.