The Mojahedin-e Khalq (MEK) or the People’s Mojahedin Organization of Iran, and its political branch the National Council of Resistance of Iran (NCRI), arranges the yearly event, which draws high-profile international speakers. 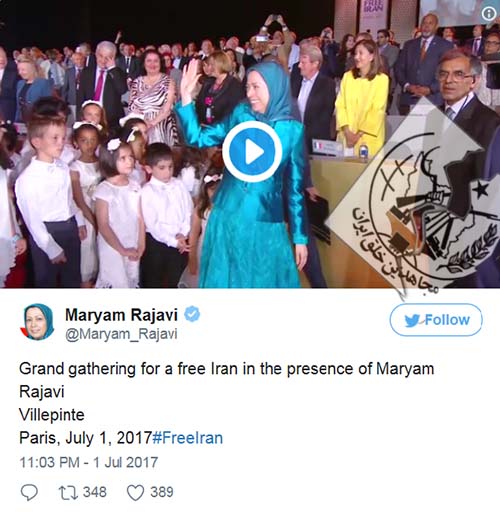 The NCRI claimed in its run-up that “the July 1 gathering represents the will of the people of Iran,” and that hundreds of expressions of support for the group had taken place within Iran, CNS news reported.

However, the hashtag #IranHatesMEK, which flooded Twitter with hundreds of messages against the exiled opposition organization over the weekend, might suggest otherwise.

MEK is designated a terrorist organization by Iran and Iraq and, until recently, it was also considered as such by the US and EU. Former US Secretary of State Hillary Clinton removed this classification in 2012, citing the group’s renunciation of violence in 2001.

The state department nonetheless indicated at the time:”With today’s actions, the Department does not overlook or forget the MEK’s past acts of terrorism…The Department also has serious concerns about the MEK as an organization, particularly with regard to allegations of abuse committed against its own members.”

Involved in the overthrow of the Shah in 1979, two years later the MEK had turned against Ayatollah Khomeini and begun conducting attacks against the new Islamic government.

In 1981 it bombed first the headquarters of the Islamic Republic Party, killing 74 senior officials and 27 members of parliament, then a meeting of Iran’s national security council, killing Iran’s president and the prime minister. Bombings targeting “agents of the regime” continued into the early 1990s.

It was by backing Saddam Hussein in the Iran-Iraq war, however, that they lost the majority of their popular support in Iran. 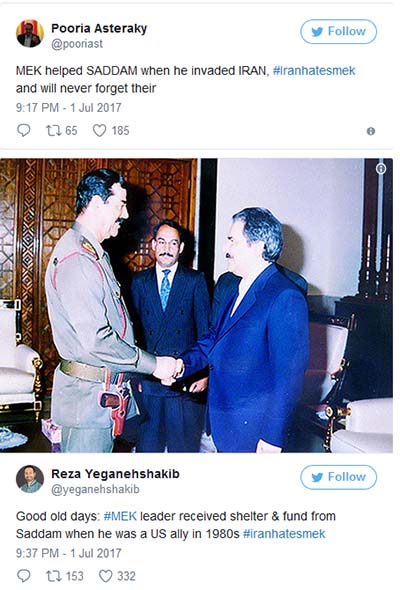 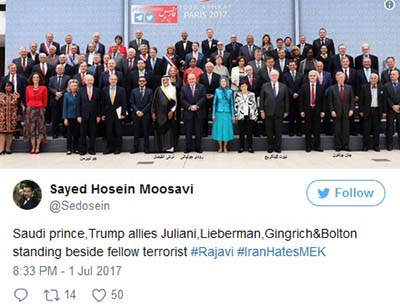 Speaking at the event, Giuliani, who is now an informal adviser to President Trump, expressed his hope that the new administration would take steps to “not only implement a new approach toward the regime in Iran, but to embrace the Iranian opposition in tackling a common problem.”

There is an irony in such US support for the MEK, albeit coming from figures no longer in positions of power. The organization took an aggressive anti-US and anti-Israeli stance in the 1970s, enthusiastically backing the taking of hostages at the US embassy, according to some reports. In fact, they are accused of being behind the killings of six Americans during that period.

Added to that, a 1992 state department report indicated that”exploiting western opprobrium of the behaviour of the current government of Iran, the (MEK) posit themselves as the alternative”

“To achieve that goal,” the report continued, “they claim they have the support of a majority of Iranians. This claim is much disputed by academics and other specialists on Iran, who assert that in fact the MEK have little support among Iranians.”

That may have been 25 years ago, but yesterday Maryam Rajavi, the NCRI’s”president-elect”, said at the gathering that “the ruling regime is in disarray and paralyzed as never before.

“Iranian society is simmering with discontent and the international community is finally getting closer to the reality that appeasing the ruling theocracy is misguided,” she added.

Framing her organization as the popular opposition ready to take over – the”parliament in exile”- Rajavi continues to draw upon dislike of the current Iranian regime to gain support for MEK in the West. This, despite a 2011 US state department report placing membership at just 5,000-10,000. 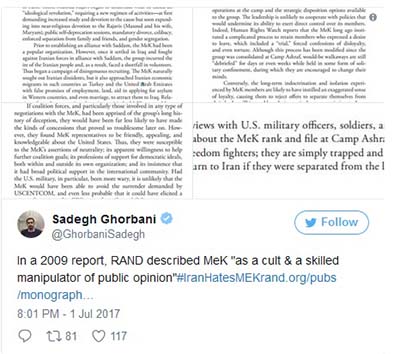 Yet, on top of its problematic past, some have suggested that Western support for the MEK could undercut the efforts of more mainstream Iranian opposition groups. These include the Green Movement, which drew out large numbers of protesters following the 2009 presidential election.

It is not clear to what extent this social media trend represents Iranian public opinion – freedom of expression is limited, after all. Still, when combined with several reports suggesting limited enthusiasm for this opposition, the hashtag”Iran hates MEK”seems to speak for itself.