Once more, the Cult of Rajavi (the MKO) launched its annual propaganda operation in Paris without the presence of Massoud Rajavi. Instead, a long list of retired politicians were present at the so-called great gathering to speak on behalf of the group declaring their hostile stance against Iran. The lavish MKO-run rally was making efforts to show the group off as the representative of the Iranian public while the Iranians were flooding tweeter with thousands of messages with hashtags #IranHatesMEK, #No2MEK and #No2Rajavi, on July 1st, 2017. 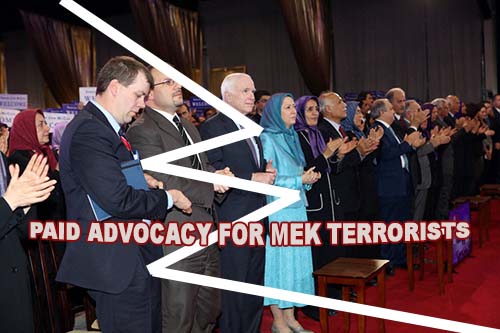 The meeting was also attended by Arab figures who share their animosity and hatred for Iran with Mujahedin Khalq.  Prince Turki al-Faisal was again one of  the key speakers of the event. The audience have probably not forgotten his last year’s huge gaffe to announce the death of Massoud Rajavi at the tribune of the event. The Saudi prince assured the cult of Rajavi about its financial resources in order to keep on its treasonous agenda against the Iranian people.

Mohammed Haider Ghuloum of Arabia Deserta website explains how the MEK got along with the Saudi authorities after the collapse of the Iraqi dictator. “After the 2003 invasion of Iraq by Western powers, with strong Arab help, the MEK/MKO moved to a huge camp outside Baghdad,” he writes. “When the Iraqi elections brought a Shi’a-Kurdish-dominated government, the MEK/MKO found new sponsors and financiers: Arab kings and princes. They also were eventually, and painstakingly, forced to move out of Iraq.”

As the long-life, enraged, regional rival of the Islamic Republic, Saudi Arabia’s warm relationship with the MKO is expectable –just like its sponsorship for Takfiri groups including the ISIS. Actually,the MKO-run rallies provide an opportunity for the Saudi officials to voice their hatred and anger against Iranians. However, Turki al-Faisal’s comments should not be taken seriously. Paradoxically, the Saudi prince, who claims Iran’s presidential elections are undemocratic and asks for the trial of the Iranian authorities lives in a monarchy where the most basic rights of humans are violated every day.

On the other hand, the American sponsors of the MKO are motivated by one single thing which is money. Based on numerous documents published on the MKO history by the US government, they probably have enough information about the violent past of the MKO as well as its cult-like nature but seemingly they prefer to ignore the true facts about their good terrorists.

The allegedly sympathetically dealings between the MKO and former high profiles of the United States also demonstrates the huge hypocrisy of the group leaders. About half a century ago, the Mujahedin Khalq Organization was established as an anti-American, anti-Imperialism and anti-Zionism movement. “There is an irony in such US support for the MEK, albeit coming from figures no longer in positions of power,” according to Albawaba website. “The organization took an aggressive anti-US and anti-Israeli stance in the 1970s, enthusiastically backing the taking of hostages at the US embassy, according to some reports. In fact, they are accused of being behind the killings of six Americans during that period.”

Alwababa cites a 1992 state department report asserting that”exploiting western opprobrium of the behavior of the current government of Iran, the (MEK) posit themselves as the alternative”. “To achieve that goal,” the report continued, “they claim they have the support of a majority of Iranians. This claim is much disputed by academics and other specialists on Iran, who assert that in fact the MEK have little support among Iranians.”

Ghuloum of Arabia Deserta also writes: “They all probably know that this organization has little if any support or credibility inside Iran, that its siding with Saddam Hussein’s Baathist regime was probably an unforgivable act. So, it is a waste of American time and money to emphasis it. But the money received is too good for them to resist.”

The Arabia Deserta correspondent accurately believes that the MKO’s and its supporters’ propaganda for regime change in Iran is originated in their “self-delusion” about Iran and the Middle East. “They all must know it is pure nonsense, but the again money is too good for all participants, and the futile message sounds good to many extreme right-wing US media outlets,” he states. “Besides, the Israeli Lobby and the newly influential Saudi lobby and the sources of oil money in Washington like it.”

Indeed, the MKO is the most despised terrorist group among Iranians. Out of the nearly 17,000 Iranians killed in terrorist assaults since the 1979 Revolution, about 12,000 have fallen victim to MKO’s acts of terror. The hashtag”Iran hates MEK”accompanied with Iranians’ accounts and experiences of the MKO atrocities is the slap in the face of the Rajavis and their paid sponsors.