The tensions between North Korea and the United States have escalated in the past days. The United States is preparing for all options, including a “preemptive war,” to stop North Korea’s nuclear and missile programs. President Trump has stated that the US will not tolerate “North Korea being able to threaten the United States.” On the other side, North Korea says it will not give up on its nuclear deterrence unless Washington ends its hostile policy toward Pyongyang and dissolves the US-led UN command in South Korea. Thousands of US soldiers are stationed in South Korea and Japan. This preventative actions by the US government were taking place while some of its Congress senators were visiting with the leader of the Mujahedin Khalq (the MKO, MEK, the Cult of Rajavi) that is a small North Korea, itself. 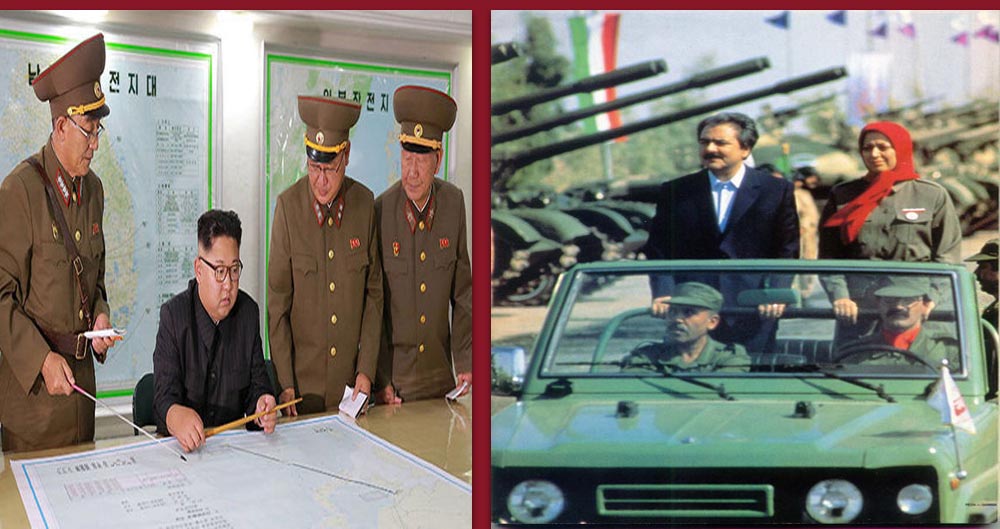 The delegation, Senators Roy Blunt, Vice President of the Republican Conference, and member of the Appropriation, Select Intelligence, Rules and Administration, and Commerce, Science, and Transportation committees; John Cornyn, the Majority Whip, and a member of the Judiciary, Select Intelligence, and Finance committees; and Thom Tillis, a member of the Armed Services, Judiciary, Banking, Housing and Urban Affairs and Veterans’ Affairs committees held a meeting with the head of the MKO cult, Maryam Rajavi, in the Albanian capital, Tirana.

As a matter of fact, the MKO was first established on an intensely anti-American platform. The group has murdered several Americans and is considered by certain human rights and international bodies such as  Human Rights Watch to be an anti-democratic cult. After joining Saddam in his war against Iran during the 1980s, what Iranians almost universally regard as an act of treason, the group lost essentially all its popular support. [1]

However, American supporters of the MKO rarely mention the group’s violent and anti-American past, and portray the group not as terrorists but as freedom fighters with values just like them, as republicans and warmongers of Trump administration are ready to serve as a vanguards of regime change in Iran. In addition, some of them acknowledge that they know little about the group before they were invited to its events or to their trips to France or Albania but the fee the MKO pays them is good enough to forget or ignore the entire anti-American and violent background of the group.

Definitely, American friends of Maryam Rajavi should be concerned about her as if they are concerned about Kim Jong Un. Camps of the MKO are run by an authoritarian cult-like system very similar to the one ruling North Korea. MKO members just like North Koreans are “raised to be soldiers” with the sole purpose of serving their great leader.

“Their lives were completely mapped out according to the great leader,” the journalist, Suki Kim — who spent six months undercover in North Korea in 2011–  told CNN. “Any information from outside is forbidden and not shown to them in any way. It’s really a system of absolute control.” [2]

According to the CNN, Kim described how computer majors in the university didn’t even know the Internet existed and how her students had to attend weekly meetings to report on each other, “so there’s a surveillance system.” [3]

Actually, Suki Kim’s account of the life in North Korea recalls two articles authored by the New York Times journalist Elizabeth Rubin in July 2003 and August 2011 in which she describes her first-hand account of visiting Camp Ashraf, the MKO’s then headquarters in Iraq.

“When I arrived at Camp Ashraf, the base of the group’s operations, in April 2003, I thought I’d entered a fictional world of female worker bees,” Rubin writes. “Everywhere I saw women dressed exactly alike, in khaki uniforms and mud-colored head scarves, driving back and forth in white pickup trucks, staring ahead in a daze as if they were working at a factory in Maoist China. I met dozens of young women buried in the mouths of tanks, busily tinkering with the engines. One by one, the girls bounded up to me and my two minders to recite their transformations from human beings to acolytes of Ms. Rajavi. One said she had been suicidal in Iran until she found Ms. Rajavi on the Internet.” [4]

As Suki Kim describes North Korea as “a system set up solely to serve the country’s leader, in which citizens have access to only one newspaper and one television station dedicated to teaching them about their leader”, [5] Elizabeth Rubin describes the parallel system ruling Camp Ashraf where “3,400 members of the militant group reside in total isolation on a 14-square-mile tract of harsh desert land. Access to the Internet, phones and information about the outside world is prohibited. Posters of Ms. Rajavi and her smiling green eyes abound. Meanwhile, she lives in luxury in France; her husband has remained in hiding since the United States occupied Iraq in 2003.” [6]

Suki Kim believes that North Korea is “the saddest place in the world”. She asserts, “The country is nothing like we’ve seen before. It’s a nuclear power that is also absolutely enslaving its citizens for the sake of this really one-man nation.” [7]

It seems that Kim has not heard of the Cult of Rajavi, before; eventually she does not know that this cult advocates regime change in Iran and claims to be the alternative of the current Iranian government. The saddest place in the world is also seen in the world inside the MKO. “Friendships and all emotional relationships are forbidden,” reveals Rubin. “From the time they are toddlers, boys and girls are not allowed to speak to each other. Each day at Camp Ashraf you had to report your dreams and thoughts. If a man was turned on by the scent of a woman or a whiff of perfume, he had to confess. Members had to attend weekly ideological cleansings in which they publicly confessed their sexual desires. Members were even forced to divorce and take a vow of lifelong celibacy to ensure that all their energy and love would be directed toward Maryam and Massoud.” [8]

Therefore, who can promise that a future Iran ruled by Maryam Rajavi would not turn into a nuclear power? The existence of communities like the Cult of Rajavi and North Korea is indeed “devastating problem”.  As North Korea is considered a threat by the US politic men, Rubin warns the MKO sponsors: “Mujahedeen Khalq is not only irrelevant to the cause of Iran’s democratic activists, but a totalitarian cult that will come back to haunt us.” [9]