At a time when Iranian protests against corruption and bad living conditions have turned into protests against the government in Iran in which people have been killed, the Kremlin’s Sputnik Portal, in today’s paper, has accused the Americans and Albania. According to them, the CIA is preparing killers in Albania to attack and fight with the Iranian regime. 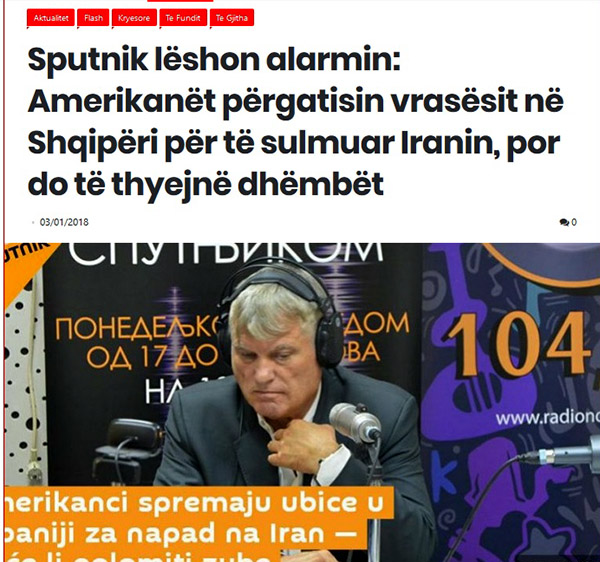 The editorial is part of a show they have created for Radio Sputnik in Serbian, which is broadcast on the internet as well as on normal radio waves.

In the interview given to journalists, political analyst Aleksandar Pavic has made some strong allegations.

Pavic says that the United States has very serious goals when it comes to Iran and recalls that “President Trump is closely associated with the Israeli lobby, which influenced the decision to transfer the US embassy to Jerusalem. The United States claims that Iran is a terrorist state and an exporter of terrorism. We know this is not true, because if we speak the truth, the number one terrorist state is Saudi Arabia.

The Mujahedin-e-Khalq, one of the main opponents of Iran’s government, emigrated to Albania last year. They were transferred there [from Iraq] by the Americans. There are about 3,000 members at this headquarters and they have a website to closely monitor the situation in Iran. It is a strange organization that has organized terrorist attacks against Iranian authorities in Iran over the past ten years, Pavic said

This accusation by Pavic is highlighted in the article. Trump, along with Israel, has a clear plan and this is being activated today by Albania. The CIA and Israeli services are preparing soldiers to send them to war in Iran to overthrow the regime but that will be impossible, says Pavic.

Today the head of Iran’s Revolutionary Guards has declared the defeat of the “uprising” in the country.

Major Majti Mohammad Ali Jafari made the announcement before the mass of people who participated in pro-government rallies called to counter the riots.

The protests were initially against corruption, but turned into wider anti-government sentiment.

General Jafari said: “Today we can say that this is the end of the uprising.”

He said, “the willingness of the people’s security and vigilance” had led to the loss of “enemies”. He added: “There were a maximum of 1,500 in each county and the number of protests did not exceed 15,000 people nationwide.”

“Enemies” have tried to create “cultural, economic and security threats against Islamic Iran,” he said.