In 2002 and 2003, as the United States geared up for the invasion of Iraq, many protests broke out across the country, as did a passionate public debate about why America was going to war and whether it should. That debate, sadly, was not proportionately reflected on Capitol Hill, but it still mattered. 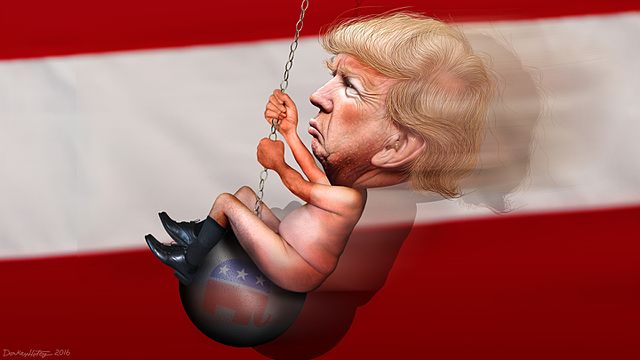 The invasion destroyed Iraq as well as the dual containment policy that, despite its many flaws, had kept a relative lid on Iraq’s ambitions and Iraq’s ability to upset regional stability. The ensuing years of combat spawned the Islamic State and other terrorist groups, and destabilized the entire region, most severely affecting Syria.
Now, the same forces have come together to take down the most significant diplomatic achievement in the Middle East in recent memory and create a new, highly unstable future. Donald Trump today announced the reimposition of sanctions on Iran, putting the United States in direct violation of the Joint Comprehensive Plan of Action (JCPOA), colloquially called the Iran nuclear deal. In Iraq, the United States went in with no exit strategy. The Trump administration likewise has no plan for the day after exiting the Iran nuclear deal. In both cases, however, the real goal is regime change.
While this diplomatic debacle is going on in Washington, Israel has gone on high alert in anticipation of an Iranian attack. The Israeli military has said that it has detected “unusual” Iranian movements in Syria, and it has been anticipating an Iranian attack since Israel struck Iranian positions in Syria last month.
Such a high alert is not common for Israel unless an attack is imminent. But it would mark a departure for Iran, a country that has generally avoided direct conflict with Israel, the United States, and Saudi Arabia. If an attack does happen, it will mean things have changed, as they inevitably will now that Trump has violated the JCPOA by reinstating sanctions.

Once Trump decided to scuttle the Iran nuclear deal, whatever brinksmanship Iran and Israel are playing at in Syria took on greater significance. With the lone exception of Defense Secretary Jim Mattis (who has advocated attacking Iran in the past), Trump is surrounded by pro-war voices. His new lawyer, Rudy Giuliani took time out from deepening Trump’s legal troubles with his gaffes to tell an audience on Saturday that Trump is “as committed to regime change as we are.” That event, incidentally, was organized by the Organization of Iranian-American Communities, a front group for the Mojahedin-e Khalq-e Iran, or MEK, a notorious cult that advocates for regime change in Iran. The MEK has been banned from Iran and, until only a few years ago, was labeled a terrorist organization even by the US.
It is the season of regime change in Washington and Jerusalem. Pulling out of the nuclear deal was the first, key step. But it seems unlikely that Trump and Israeli Prime Minister Benjamin Netanyahu are going to just sit back and hope that Iran takes some provocative action. No doubt, the Europeans, and very likely the Russians as well, will take steps to convince Iran to keep the JCPOA alive and not retaliate against Trump’s action.
To justify upping the military ante, therefore, will require whipping up greater anger at Iran. There is more than enough apprehension over Iran in Israel. But the military leadership there continues to oppose regime change, preferring to focus strictly on pushing Iran out of Syria. That could lead to a wider conflict, which would please Israel’s political leadership.
In the US, there is still a strong, bipartisan distaste for getting involved in another Middle East conflict. There will no doubt be a large public relations blitz reminding every American that Iran is the greatest threat to stability in the world, the “leading state sponsor of terrorism,” and even the devil incarnate.
It’s unclear, however, whether such a blitz could overcome the current aversion to any military escalation.
Iran in Perspective
The hatred of Iran in both the United States and Israel is visceral. When the Shah was deposed in 1979, the protesters who led the rebellion and, later, the religious leaders who came to power were fiery anti-Zionists who, rightly, blamed the United States for years of autocratic rule under the Shah. The subsequent hostage drama made Iran even more hated and reviled in the US than the Soviet Union.
Iran is a theocracy, and a Muslim one, so it is easy for many Americans to view it as a barbaric and backward country, despite how far removed from reality that is. Iran has done little to hamper the United States directly in the region, but it is a competitor—albeit one punching above its weight—to U.S. ally, Saudi Arabia. And, of course, its support for Hezbollah and, sometimes, Hamas demonstrates its enmity to Israel in a concrete way.
The Iranian regime is also quite repressive and a frequent human rights violator. But in this, it runs a long way behind Saudi Arabia. And although Iran surely meddles in the foreign affairs of other countries in the region—usually by supporting one side in a conflict or, in the case of Lebanon, a political competition—it again lags far behind Saudi Arabia in this.
The US loves to repeat that Iran is the “world’s leading state sponsor of terrorism,” but this has always been a disingenuous statement. Iran’s support for Hezbollah, the Houthis in Yemen, Hamas, and various Shi’a militias has always been relatively transparent. As Daniel Byman of the Brookings Institute points out,
Understanding Saudi Arabia’s relationship with terrorists…is far more difficult than assessing Iran’s backing of terrorism, which is open, extensive, and state-sponsored. Much of Saudi support is done by non-state actors. Yet being ‘non-state’ does not absolve the Saudi government of responsibility. These non-state actors enjoy a range of relationships to the Saudi regime. Some receive or did receive official patronage. Others, particularly those tied to leading clerics in the Kingdom, are embraced indirectly by the regime’s self-proclaimed role as Defender of the Faithful. And still others are truly private, acting independently of the government and in times in opposition to it.

Iran is certainly not a free and open society, but it has far more elaborate parliamentary systems and genuine, complex politics than many U.S. allies in the region, including Saudi Arabia. It has cracked down on protesters, as has been widely noted, and its elections are restricted to candidates approved by the Supreme Leader, Ayatollah Ali Khamenei. But these elections produce different results, as was evident in the change in policy from Mahmoud Ahmadinejad to Hassan Rouhani.
The point is not to defend a problematic regime. But any suggestion that the Iranian regime is uniquely evil and should therefore be pushed out is nonsense. Similarly, although the majority of Iranians favor better relations with the West, any move toward regime change is going to turn that same majority against the United States.
A Manufactured Crisis
Trump has betrayed the world and US national interests. He has shown that the commitments of the United States cannot be trusted. Iran abided by the deal it signed. That deal was not the horribly flawed one Trump claimed. It took away most of Iran’s enriched uranium and its plutonium. It allowed by far the most intrusive inspection regime ever implemented. And even if Iran had tried to get around it, the deal substantially lengthened the time it would take Iran to develop a weapon.
It was not only an historically good deal, it was one that Iran continued to abide by even though the US under Trump was violating the deal on a daily basis by frightening international investors away from investing in Iran, something the US specifically committed to refrain from. Now that Trump has backed out of the deal, he has created a crisis in the region and for the US that didn’t exist before.
This is something more Americans need to have the courage to say. The march to war will only be slowed or stopped if Americans stand up and say that Washington does not have the right to push for regime change anywhere, let alone in a country where it led to disaster the last time the United States did it.
The next step in the regime change plan will be winning the narrative. If Trump can do that, war will not be far behind. Neither Europe nor anyone else can help with that. This is a struggle that only Americans can decide. History will not look kindly on us if the regime changers win.
Mitchell Plitnick, Lobelog