State Secretary delisted the group, reportedly to use MEK for US purposes.

US withdrawal from the Iran deal: a ploy to force a regime change

Will EU be able to sustain the Nuclear Deal?

The United States President Donald Trump’s withdrawal from the Iran nuclear deal was the wrong decision at the wrong time. The decision is likely to compound global political, economic and security risks. Now the European Union must sustain the nuclear deal, along with Russia and China. 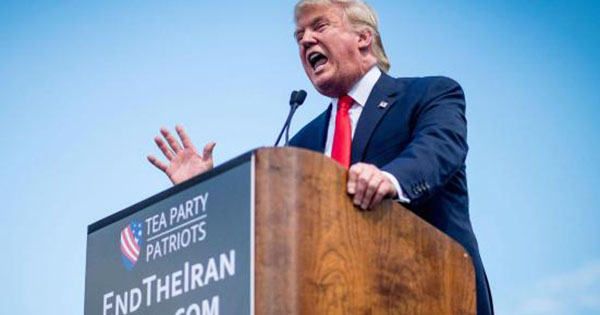 For three years, the comprehensive nuclear accord (J.C.P.O.A.) has offered Iran relief from US, United Nations and multilateral sanctions on energy, financial, shipping, automotive and other sectors. However, a shift in the US policy began in late 2016, when the Senate and the House of Representatives unanimously extended the Iran Sanctions Act for a decade.

Not just most Republicans but many Democrats who supported the J.C.P.O.A. in the Obama era reversed their positions surprisingly quickly. This emboldened Trump’s far more muscular – and illicit – policy against Iran.

Effort to destabilize Iran to win the Middle East

Regionally, Trump’s stance leans on Saudi Arabia for economic and geopolitical support, as evidenced by the $110 billion arms deal with Riyadh signed a year ago. This is further reinforced by security ties with Israel, as reflected by U.S. recognition of Jerusalem as the capital of Israel – a fatal policy mistake denounced by the international community in the UN and one that reversed almost seven decades of US foreign policy.

The increasing convergence of the US, Saudi and Israeli interests in the Middle East reflects an escalating quest for regional primacy. Last October, the Trump administration designated sanctions on additional missile and Islamic Revolutionary Guard Corps-related entities, while threatening to cease implementing the J.C.P.O.A. By weakening Iran’s “moderates,” the White House hoped to incite “hawks” into strategic moves that could be used as a pretext for a regime change.

Supported by Republican neoconservatives and Democrats’ liberal interventionists, the plan relies on discontented Iranian exiles and Shah loyalists in the West, while Saudi Arabia and Israel try to soften Iran in military and covert operations in ongoing proxy wars.

Along with economic pressures, Trump seized covert operations after naming the controversial Michael D’Andrea, who was deeply involved with the US interrogation program after 9/11 attacks, the head of CIA’s Iran operations. At the same time, the ultraconservative hawk Mike Pompeo replaced Rex Tillerson as Secretary of State. Both D’Andrea and Pompeo favour a regime change in Iran.

Trump also made the neoconservative John Bolton his national security adviser and Gina Haspel the new head of CIA. While Bolton contributed to the “weapons of mass destruction” pretence that led to the war in Iraq, Haspel served as chief of a CIA black site torture prison and played a role in the destruction of some 100 interrogation videotapes.

In 2003, Bolton relied on false data from U.S.-based Iraqi exiles and now he is reliant on flawed information from Iraqi exiles. In November 2017, Bolton urged the US to have a contingency plan for a “Shah of Iran scenario.” Four months before, he had advocated Trump’s withdrawal from the deal, pledging a regime change before February 2019 – the 50th anniversary of the Iranian revolution.

Withdrawing from the Iran #NuclearDeal should be a top @realDonaldTrump administration priority.

Bolton supports Mojahedin-e Khalq (MEK), an Iranian opposition group on which he relies for information(and speaking fees). MEK advocates a violent overthrow of Iran’s democratically-elected government. Until the early 2010s, the UK, EU and the US considered MEK a cultist terrorist organization but State Secretary Hillary Clinton de-listed the group, reportedly to use MEK for US purposes.

On the MEK side, the demands for regime change in Iran were orchestrated largely by its leader Maryam Rajavi, the “President-elect” of the National Council of Resistance of Iran (NCRI), who has been investigated for terrorism in and expelled from France (her husband is wanted by Iraq for crimes against humanity), and Alireza Jafarzadeh, the NCRI’s public face, who has fed US and international agencies information about Iran’s alleged nuclear ambitions since the early 2000s.

Some of the MEK funds were accrued during the Iraq-Iran War (1980-88) when the MEK was hosted by Saddam Hussein to fight against Iran, reportedly in exchange for millions of dollars. From the ‘90s to early 2000s, MEK coordinated terror raids against Iranian diplomatic missions internationally.

As reported by the NBC the MEK financed, trained and armed by Israel’s secret service – has assassinated Iranian nuclear scientists since 2007. Even before de-listing, the US provided training and funding for the MEK on the US soil and in covert operations in Iran, according to prominent author Seymour Hersh writing in the New Yorker.

When MEK uses substantial funds to attract prominent Americans, these funds originate from money-laundering organizations in Europe, US and the Middle East, according to FBI and State Department. The case of the MEK, argues constitutional lawyer Glen Greenwald, indicates that the “US government is not opposed to terrorism; it favours it.”

Along with the former Shah’s supporters in the U.S. and elsewhere, the regime change planners rely on these shady figures, and their quasi-legal organizations, just as they did with Ahmed Chalabi of the Iraqi National Congress (NC) in 2003. That’s when sanctions led to the War in Iraq – which is their role now in Iran as well.

From old sanctions to new ones

Last week, the US once again acting unilaterally, moved towards cutting Iran off from the global economy as the Treasury Department imposed new sanctions on several Iranian companies, individuals and officials presumably for an illegal currency-exchange network in the UAE. Throughout his 2016 campaign, Trump described the Iran nuclear deal as a “disaster.” Aggressive rhetoric followed by a redefinition of terms are key elements in his deal-making. These unilateral efforts rest first on economic pressure, followed by political intimidation and when necessary, military force.

Following the J.C.P.O.A., primary sanctions on energy, financial, shipping, automotive and other sectors were lifted after International Atomic Energy Agency’s (IAEA) certification in January 2016 that Iran had complied with the agreement. Yet, secondary sanctions on firms remained in place, along with sanctions applying to US companies, including banks.

The White House will seek to strengthen the secondary sanctions while seeking to restore the primary sanctions. Last October, Trump demanded the J.C.P.O.A. to limit Iranian ballistic missile development and regional activities. Accordingly, the administration has imposed sanctions on additional entities related to Iran’s missile program, Navy operations in the Persian Gulf, and other activities in the region.

The spotlight is back on Iran sanctions enacted or under consideration in the Congress, such as the Countering America’s Adversaries through Sanctions Act of 2017 (CAATSA), plus pending legislation relating to Iran’s ballistic missiles, the assets of Iranian leaders, stricter oversight on Iran’s access to finance, the re-imposition of waived U.S. sanctions, and possible multilateral international sanctions.

Since Russia and China will stay solidly behind the Iran nuclear deal, the real question is whether the key European powers – Germany, France, the UK, and the EU itself – will defend it.

Prior to Trump’s decision, EU leaders stressed the importance of the full implementation of the J.C.P.O.A. French President Emmanuel Macron warned that “the nuclear non-proliferation regime is at stake.” Germany’s Foreign Minister Heiko Maas argued that theJ.C.P.O.A. “makes the world safer.” UK Foreign Minister Boris Johnson tweeted that the “UK remains strongly committed to the J.C.P.O.A..” Top EU diplomat Federica Mogherini pledged the EU will remain committed to the deal.

Deeply regret US decision to withdraw from the Iran nuclear deal. UK remains strongly committed to the JCPoA, and will work with E3 partners and the other parties to the deal to maintain it. Await more detail on US plan.

However, about a week ago Macron tweeted saying that “we will work collectively on a broader framework, covering nuclear activity, the post-2025 period, ballistic activity, and stability in the Middle East, notably Syria, Yemen and Iraq.” Such statements suggest that some EU leaders may try to redefine the EU approach by leaving the J.C.P.O.A. intact, but couple the deal with new and broader conditions, which would undermine the deal.

We will work collectively on a broader framework, covering nuclear activity, the post-2025 period, ballistic activity, and stability in the Middle-East, notably Syria, Yemen, and Iraq.

The Trump administration is likely to target European businesses that have done business in and with Iran since the Iran nuclear deal. It may extend sanctions over to companies that represent other J.C.P.O.A. parties – that is, China, France, Russia, UK, Germany and the EU – thus raising risks for their U.S. access. As Treasury Secretary Steven Mnuchin recently put it, European-Iran business agreements will be voided as “the existing licenses will be revoked.”

Along with Renault, PSA Peugeot Citroen and Sanofi have huge stakes in the deal due to the Airbus contract to provide Iran Air 100 aeroplanes for $21 billion and the oil giant Total’s $2 billion deal to develop the South Pars oil field. Over 120 German companies, including Volkswagen and Siemens, operate in Iran and another 10,000 do business with Iran. Economic pressure could harm Iran’s oil industry significantly, the largest single buyers of which include China, South Korea, Turkey, Japan, Italy and India.

The White House’s message seems loud and clear, “Get out of Iran if you want to stay in the U.S.” It is an effort at regime change but without international legitimacy since Iran has fully adhered to conditions of the J.C.P.O.A. The very credibility of the EU powers is on the line now.

Dr. Dan Steinbock is an internationally recognized strategist of the multipolar world and the founder of Difference Group. He has served as research director at the India, China and America Institute (USA) and visiting fellow at the Shanghai Institutes for International Studies (China) and the EU Center (Singapore).