When it comes to Iran, John Bolton has always been one of the most hawkish figures in the US foreign policy establishment. 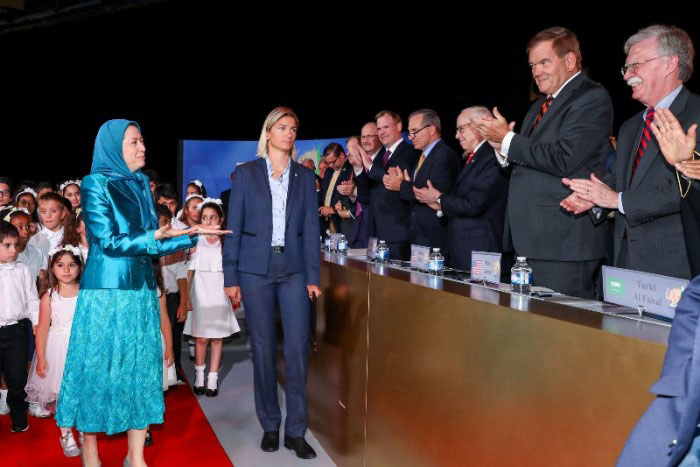 In July 2017 for example, he told a group of Mujahedeen Khalq (MEK) supporters in Paris that “before 2019, we here will celebrate in Tehran!”. In that same speech, Bolton declared that the official policy of the United States should be regime change in Iran.

Bolton, a long-time proponent of American-sponsored regime change in Iran and new national security adviser to the Trump administration, is now better placed than ever to fulfill his long-standing dream of toppling the Islamic Republic of Iran. It is a dream, however, that would in fact be a nightmare for the United States, Iran and the rest of the region.

But recently we have learned that Bolton’s dream might have come with a price tag: MEK expert Joanne Stocker asserts that the MEK likely paid Bolton at least $180k in “speaker fees”, making him more a lobbyist than a statesman.

To appreciate the significance of Bolton’s ties with this shadowy group, it is important to understand the MEK’s history.

After its founding in 1965, the MEK morphed into an Islamist-Marxist organisation that sought to overthrow the Shah of Iran through armed conflict.

The MEK’s original alliance with Ayatollah Khomeini, who shared this goal of overthrowing the Shah, quickly fell apart after the Shah’s departure in 1979, as the two forces had sharply different visions for post-revolutionary Iran

The MEK and Khomeinists soon found themselves in open civil war in Iran from 1979-1983. The conflict came to an end when, as the result of a number of factors including greater popular support, the Khomeinists prevailed against the MEK and pushed the group into exile.

Subsequently, the MEK, in what is considered by most Iranians as an act of treason, sided with Saddam Hussein against Iran during the eight year war in the 1980s. Unfortunately for them, this alliance would merely lead to yet another military defeat for the MEK at the hands of the Iranian armed forces.

During Operation Mersad in 1988, Iranian forces defeated an invading MEK force that had support from Saddam Hussein. Not only did the MEK fail to make any military gains against the Iranian regime with this move, siding with Saddam Hussein during the war destroyed any widespread support the group had left in Iran.

Despite this string of military losses, the MEK never ended its quest to gain power in Iran. The group enjoyed continued support from Saddam even after 1988 as they were housed at Iraq’s Camp Ashraf.

The group continued to carry out assassination plots against Iranian officials and even supported Saddam Hussein’s violent suppression of Shia and Kurdish rebellions in Iraq. The group earned a reputation as a cult as its members would set themselves on fire, reportedly under orders from the leadership.

The MEK hasn’t exclusively targeted the Shah and the Islamic regime. Its bombing campaign against the Shah, which killed Americans, earned the group a terrorist organisation designation from 1997 to 2012.

This ghastly past however, has not stopped individuals such as John Bolton from reportedly receiving money from the group, despite MEK members and supporters facing criminal prosecution in the United States.

The group’s ideology has also shifted tremendously according to its political needs. Initially anti-Israeli and anti-American, the group now enjoys support from both states. What’s more, many reports indicate that the group gets funding from Saudi Arabia as part of the ongoing cold war between Saudi Arabia and Iran.

Academics and policymakers alike state that the MEK does not enjoy widespread support inside Iran. Indeed, most Iranians who do not support the current clerical regime also vehemently oppose the MEK.

Bolton cosying up to the group in his quest to overthrow the clerical regime in Iran is incredibly troublesome.

Not only would regime change in Iran potentially cost the United States trillions of dollars, tasking a group such as the MEK to carry out such a goal is downright foolish.

By supporting a group that is viewed so unfavourably (even by those opposed to the clerical regime), Bolton is working against himself: The Iranian leadership will use Bolton’s MEK links to rally the Iranian people behind the flag.

There are yet more troubling issues: With such close ties to a cultish organisation that the Department of State officially labelled as a terrorist organisation for approximately 15 years, how could Bolton have possibly received a security clearance to work at such a high level in the White House?

Even those who support regime change in Iran should be skeptical of Bolton’s ties with this group. Given the MEK’s constantly shifting ideology, its cultish behaviour, history of violence and support for actors like Saddam Hussein, it’s highly doubtful that such a result would serve American interests even if Bolton’s plans for regime change in Iran via the MEK were successful.

Even if the Iranian public were to simply forget that this organisation supported its arch nemesis in an eight year war that killed hundreds of thousands of Iranians and caused hundreds of billions of dollars of damage to both sides, the United States and Israel would have no guarantee that the MEK would not revert back to its original anti-American and anti-Israeli ideology upon assuming power in Iran.

The Middle East is a constant reminder that just because a group welcomes American support to achieve its objectives one day, does not mean that they will remain pro-American the next.

Jon Roozenbeek is a PhD candidate at the Department of Slavonic Studies at the University of Cambridge. He studies Ukraine’s media after 2014. Before coming to Cambridge, he worked as a freelance writer, editor and journalist.

Adrià Salvador Palau Is a PhD candidate in the Distributed Information and Automation Laboratory at the University of Cambridge. He has written several journalistic articles about politics and international relations. He is interested in how data science can be used to better understand political dynamics.

Opinions expressed in this article remain those of the author and do not necessarily represent those of The New Arab, its editorial board or staff.

If forced, Iraq would extradite MKO members to Iran