A Photo Exhibition was held at the Press Club in Brussels between 3 – 7 December, 2018. The exhibition was formally opened by a panel of speakers who outlined the content and purpose of the photo exhibition. The exhibition aims to enlighten reporters and media to the dangerous consequences of blind support for the MEK. Three of the participants gave interviews in English afterwards in which they explained why the MEK is a danger to Europe and that although they joined MEK to fight for freedom and democracy in Iran, they soon discovered this was a lie, but were trapped inside the MEK by imprisonment and torture.

Anne Khodabandeh, Open Minds De-Radicalization Consultant placed the MEK’s current survival in the context of Neoconservative support. This means that in spite of well documented severe human rights violations, the MEK’s ‘regime change’ narrative is supported by paid advocates. The danger however is that the MEK will escalate their false flag ops in Europe which are blamed on Iran, only this time Europeans may be killed.

Reza Jabelli, Service Etat Civil et Population – Aawa Association, related his history with the MEK from his teenage years to the time he managed to escape the cult in Iraq when the US army guarded the MEK camp. He said that when he joined the MEK he believed it was fighting for freedom and democracy. When he discovered this was a lie, the MEK held him captive for many years, sometimes in solitary confinement, in an attempt to force him to change his mind. Jabelli said that when Maryam Rajavi was arrested by French counter terrorism police in Paris in 2003, she ordered her followers to set fire to themselves. This example shows that the MEK can pose a serious threat to peace and security in Europe because the group has not given up its belief in violence and terrorism.

Edvard Termador introduced himself as anArmenian-Iranian and a Christian. He explained how he had been a Prisoner ofWar in Iraq for nine years as a result of the Iran-Iraq war. Although he hadthe opportunity to return to Iran at the end of the war, he chose to join theMEK because he believed they would bring freedom and democracy to Iran. When herealised this was a deception, he was imprisoned inside MEK camps before beinghanded over to the Abu Ghraib political prison of Saddam Hussein. He warnedagainst believing the MEK’s false presentations of democracy. 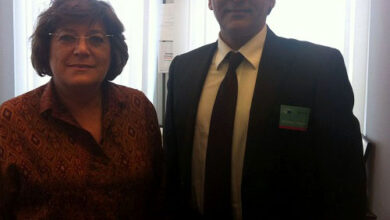 Aawa publication No: 25 in English and German, September 2007

Victims in the MKO