Giuliani’s Cuckoo Praise for the MEK
Josh Kovensky reports on this year’s annual MEK gathering at their strange compound in Albania:

President Trump’s personal attorney Rudy Giuliani has joined buckraking forces with former Senator Joe Lieberman (D-CT), speaking at an event in Albania for a bizarre, cultish Iranian group that fashions itself as a government-in-exile for the Islamic Republic.
Mujahedin-e Khalq (MEK) — once designated as a foreign terrorist group — hosted the conference at a compound that MEK operates in Albania.

Giuliani delivers pretty much the same speech every time he attends an MEK event, but this year he added the flourish of condemning people that referred to the totalitarian cult as a cult: “These are people that are dedicated to freedom, and if you think that’s a cult, there’s something wrong with you! There’s something missing in your soul!” Then the camera looks out at the crowd of identically-dressed cult members obediently applauding Giuliani’s rote recitation of the cult’s talking points. The video is priceless, as Pouya Alimagham points out here: 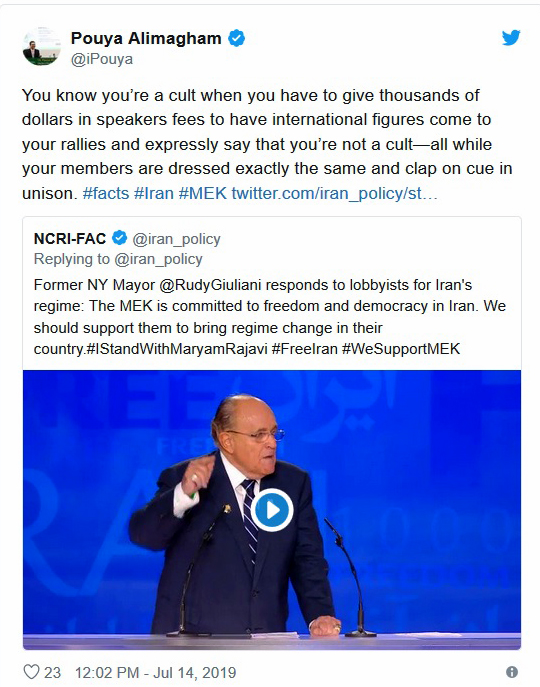 You know you’re a cult when you have to give thousands of dollars in speakers fees to have international figures come to your rallies and expressly say that you’re not a cult—all while your members are dressed exactly the same and clap on cue in unison. #facts #Iran #MEK https://t.co/EzpYJy7y6n
— Pouya Alimagham (@iPouya) July 14, 2019

When Giuliani affirms that the MEK’s agenda “looks just like our Bill of Rights,” you begin to wonder if he has undergone some of the group’s brainwashing techniques. He goes on to praise them as “miracle workers” because of the speed with which they built their creepy compound. The idea that a group that subjects its own members to physical and psychological abuse stands for “human rights” is laughable, and it is a measure of how divorced from reality Giuliani’s speech is that he would make such a claim. “This is a decent organization, this is a good organization,” the president’s lawyer asserts because this is what he has been paid to say. “This is a group we can support,” Giuliani says near the end. It speaks volumes about the horrible judgment and poor ethics of Giuliani and his fellow MEK cheerleaders that they are willing to take money from this group and say these things publicly about them.
The MEK’s paid American boosters are a disgrace, but their participation in these propaganda spectacles is useful in confirming that we can automatically dismiss anything these people have to say about Iran or Iran policy. No one that takes money from a deranged cult hated by Iranians has any business talking about Iran’s political future, and anyone that chooses to echo MEK propaganda has absolutely no credibility on any issue related to Iran. MEK boosters clearly know nothing about Iran and its people, and they definitely don’t care about what the Iranian people think or want. The “decent” and “good” organization that Giuliani praises fought for Saddam Hussein against their own country, it has killed Americans and Iranians in terrorist attacks, and it holds its own members captive and subjects them to brutal and dehumanizing treatment. The fact that he and others advocate for them to have any role in Iran’s government shows their utter contempt for the Iranian people.

The shameless cheerleading for a totalitarian cult might not seem so important, but we should remember that one of the cult’s biggest fans, John Bolton, is now National Security Advisor in charge of making Iran policy. The insane claims that Giuliani and others were making in Albania this weekend aren’t just confined to a bunch of has-beens on the take. Bolton has said many of the same things on many occasions, and I suspect he is fanatical enough in his desire for regime change that he would consider the MEK to be a legitimate ally.