Liberal MP Majid Jowhari is being fiercely targeted by online activists, trolls, and angry Liberal members in his own riding. What’s behind the hate?

Angry protesters showed up multiple times at Liberal MP Majid Jowhari’s Richmond Hill constituency office last week, holding signs plastered with his picture that read, “Shame on You. You will not Re-elected” and “NO to Lobbyist of Islamic Terrorist Regime in Iran.”

Meanwhile, local residents received cryptic emails from a former Liberal politician, Reza Moridi, saying he and three other former Liberals are “unable” to vote for Jowhari. The email offered no explanation for the statement.

Still other voters that had placed Jowhari campaign signs in front of their homes reported finding papers dropped on their lawn or placed on car windshields. The documents, obtained by Ricochet, are titled “A Better Introduction to Mr Jowhari’s Family” and slander his wife, mother and brothers, suggesting they are connected to international drug business and other criminal activities. 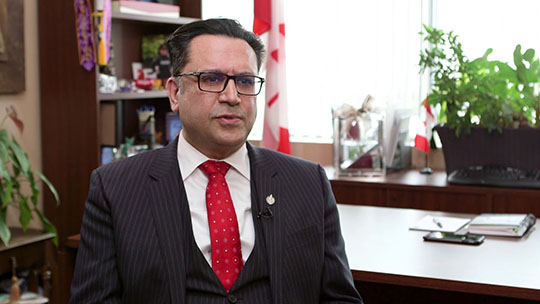 And on Thursday, a highly followed but fake Twitter account associated with the Mujahideen-e-Khalq (MEK), a cult-like group from Iran that has a history of engaging with Canadian politicians, added to an ongoing online smear campaign against Jowhari by tweeting a long thread urging Canadians to unseat him.

Sources close to the Jowhari family and campaign told Ricochet it’s been a “horrible” time for the family and that they often feel unsafe.

“They [his critics] have painted him as the complete opposite of everything he stands for. It’s not even remotely close to who he is,” said one source who asked not to be identified due to fear of being targeted themselves.

“It’s all sophisticated and interrelated,” they added. “I’ve had to contact police before. People don’t understand that fake news can actually kill you.”

Jowhari’s most vocal offline critic, Reza Moridi, is a former Liberal MPP for Richmond Hill and former Ontario minister of research, innovation and science. He denies there’s a smear campaign against Jowhari. “It’s not an attack or targeting,” Moridi told Ricochet last Friday, in reference to the cryptic email he had sent to local residents on Oct. 9. “It’s a reverse endorsement, that’s all.”

When asked why he decided to send the email to voters, particularly without an explanation of why he and the others were “unable” to vote for Jowhari, Moridi said, “These are Liberal MPs and also two former Liberal riding presidents. We came to the conclusion that we cannot support him. People can make their own decisions.

“We reviewed media reports over the past four years and also records of the candidate. I’m sure every voter is doing their own research of the candidates. We’re just saying we did that research and came to that conclusion. Coming to that decision is not difficult.”

In response, Jowhari’s office posted a response on his Facebook page the next day: “This communication represents the worst type of campaign tactics – a non-specific note from a group who do not have the courage of their convictions to say what party and policies they do support but are prepared to say only what they don’t support without providing any rationale or substantiation.”

But voters were met with another shock a few days later when the Shahrvand, a Farsi-language newspaper, came out with Moridi’s photo splashed on the front page, along with a proclamation of his support for Richmond Hill’s Conservative candidate, Costas Menegakis. The idea that a former Liberal leader was overtly canvassing for voters in his riding to vote blue sparked coverage in conservative outlets The Toronto Sun and Rebel Media.

Soon after, 100 Liberal members and supporters sent a letter addressed to the Ontario Liberal Party requesting that the party leadership publicly reject Moridi’s endorsement. Former Ontario premier and current MPP Kathleen Wynne put out a statement on Moridi’s decision to endorse a Conservative candidate in Richmond Hill. “As you know, Reza Moridi has been a trusted colleague of mine for a number of years,” she wrote. “Having said that, Reza is no longer a member of the provincial legislature nor does he speak for the Liberal Party.”

Jowhari’s office declined to comment for this story, saying they wanted to stay focused on his campaign and local residents. “We are not focused on the negative voices that are out there in the wilderness,” Jowhari’s campaign manager Michele Bussieres told Ricochet.
Canada-Iran ties

The long-term rift between the two Iranian politicians stems from their ideas around Canada-Iran relations, with Jowhari advocating for a normalization in ties, while Moridi argues Iran should be kept at a distance. Moridi and other critics interpret Jowhari’s position as support and endorsement for the theocratic regime.

When questioned by reporters last week, Jowhari said the accusations of his support for Tehran have no foundation. “Our government promised in 2015 that we will keep the dialogue open. … We will establish a relationship with our eyes wide open and step by step,” he said. “That hasn’t changed. We want to make sure that we encourage diplomacy based on a proven and deliberate track record from both sides, especially on the Iranian side.

“Dialogue also doesn’t mean appeasement,” he added. “When you talk and sit at a table, you can exchange ideas, whether it’s on the issue of human rights, whether it’s freedom of press or women. We need to sit at the table…. You cannot have a dialogue behind closed doors.”

But some residents don’t believe him. Salman Sima, a former political prisoner in Iran, is one of Jowhari’s most vociferous critics on Twitter, having previously called him a foreign agent and a representative for Ayatollah Khamenei in the Canadian Parliament. Sima stands accused of starting a smear campaign against Saman Tabasinejad, an Iranian-Canadian NDP candidate in Ontario’s last provincial elections, calling her the granddaughter of a major cleric in Iran. Tabasinejad later debunked this rumour on Twitter.

“We believe that Mr Jowhari doesn’t follow Liberal and Canadian values, including respecting human rights, respecting women’s rights and respecting LGBT rights,” he told Ricochet. “Why? Because we know and I believe that he is supporting one of the most misogynistic regimes in the world — the Islamic regime in Iran.”

Sima said the staged protests were non-partisan and unlinked to any political Iranian opposition groups, including MEK.

“I write lots of things criticizing some opposition groups, including MEK,” he said, adding he knew many residents who voted for the NDP and Liberal their whole lives but were strongly opposed to Jowhari. “Linking the protests against Majid Jowhari to MEK or any political parties is not fair because I know that lots of people come from lots of different ideas and backgrounds.”
“They are using the same tactics that the Iranian regime is using”

Regardless, it’s clear Jowhari is being watched. On Thursday, the “Heshmat Alavi” Twitter account tweeted a 17-post thread “shedding light on Jowhari being a Tehran apologist/lobbyist.” An investigation by The Intercept last June found the account was created by MEK, which is supported by Washington.

Also that week, Hassan Dai, an editor at the Iranian-American Forum website, urged Richmond Hill residents to vote against Jowhari in a tweet to his 11,000 followers.

Messages sent by Ricochet to both accounts on Oct. 17 requesting an interview and proof of the accusations levelled against Jowhari were not responded to by publication date.

Meanwhile, Iranian supporters of Jowhari’s campaign say they are particularly incensed over accusations that Jowhari and the Liberal Party are stooges of the government in Iran.

“They are using the same tactics that the Iranian regime is using — they’re claiming they’re against that but they’re doing the same thing here,” said a supporter of Jowhari’s campaign who did not want to be named out of safety concerns.

“They’re using all the resources they have to accuse and lie … they put our pictures up on Facebook and label us. This has led to a really nasty environment. We didn’t come here to be accused of being a lobby for another country or government. We came here to be contributing members of a democratic society.”

For her, the fight to keep a government in power who is open to dialogue with Iran is personal. “I have a friend who has cancer and no access to medications because of the sanctions. When Moridi ran a long time ago, I was one of his big supporters. We donated and helped, and I was so proud that an Iranian had come to power and could speak for us. But then he started to support sanctions on Iran.”