Terrorists or democrats? Albania is home to 2500 Iranian People’s Mujahedin. Their goal is to overthrow the Iranian regime. They also maintain good contacts in the German Bundestag.
In Tehran, the ayatollahs lead the Iranian people with a hard hand[..]. They have been in power for more than 40 years. Since then, exiled Iranians have been planning to overthrow the government in Tehran. There are several Iranian groups abroad. The largest are the so-called People’s Mujahideen, of which 2500 members are said to live in a camp in Albania. According to their own statements, they want to form a democratic state out of the Islamic Republic. They receive support for such a “regime change” from top American politicians, but also from German members of the Bundestag, such as CDU politician Martin Patzelt.

In Brussels and Berlin, the People’s Mujahideen – also called mujahideen-e khalq and MEK – do intensive lobbying. Members of the resistance group are standing in front of the government buildings and approaching MPs. In this way, Patzelt became aware of the organization – and is now a member of the board of the “German Solidarity Committee for a Free Iran”, which represents the interests of the People’s Mujahideen in Germany. 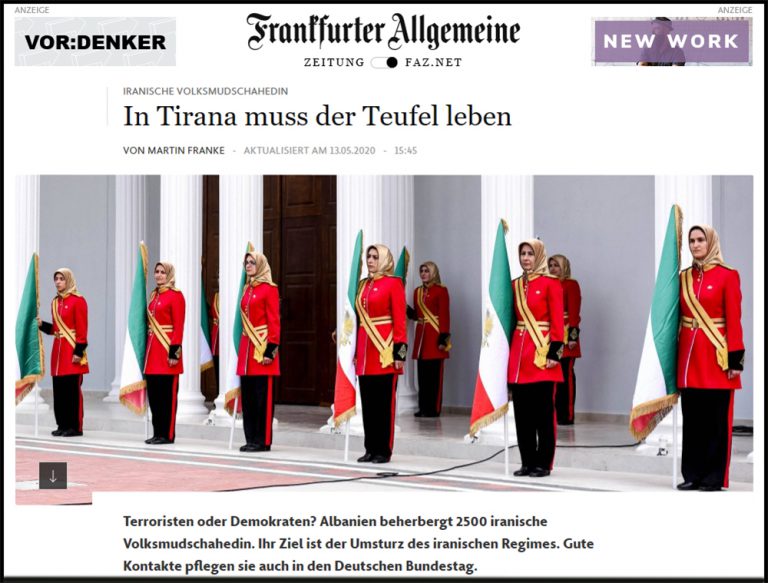 The MEK is mentioned in the substantive work in the Bundestag. As a member of the Human Rights Committee, Patzelt thematized the People’s Mujahideen. Other well-known German politicians also support the association based in Berlin-Wilmersdorf as chairperson and advisory board: the former Bundestag president Rita Süssmuth and Otto Bernhardt, board member of the Konrad-Adenauer-Stiftung. They write guest articles for German newspapers in which they draw attention to the situation of exiled Iranians in Albania, hold conferences and visit Iranians in Albania. In an interview with the FAZ, Patzelt says that he is “in line” with the People’s Mujahideen.

It is a strange connection:

The MEK are based on a mixture of Islam and Communism. Dropouts, all of whom are rejected as agents of Iran, report torture and torture in the organization.

The Guardian recently spoke to about a dozen dropouts and reported that members were brainwashed. There is a cult-like atmosphere around the leader Maryam Rajavi and her probably long dead husband Massoud, who is kept alive externally by Rajavi. Rajavi leads the group from Paris.

She is president of the Iranian Exile Parliament.

Patzelt: Not a sect, but a monastic community

In the camp in Albania, women and men live separately. In the evenings, small groups meet with a commander for “ideological training” and to confess sexual thoughts, a former member of the British newspaper said.

The confession is used to create shame.

Sometimes the commander would say: “How do you want to achieve freedom for the Iranian people if you have an erection every day?”

Contact with relatives is prohibited, as is possession of a cell phone.

However, they are not isolated from the outside world: dozens of trolls spread propaganda online every day. Patzelt, a member of the Bundestag, cannot understand the accusation that the MEK is a sect. He sees living together more like a monastic community, who has submitted to the struggle for Iran and tough camp discipline.

The history of the People’s Mujahedin is complex:

the movement originated in the 1960s. They were instrumental in the fall of the Shah in 1979, but lost political supremacy within Iran. In the years that followed, they went underground, bombing Ali Khamenei among others. .. Thereupon the People’s Mujahideen fled to Iraq and fought side by side with Saddam Hussein in the war against his own countrymen. The Iraqi dictator equipped the Iranian fighters with weapons that they only had to surrender in 2003 with the invasion of the United States armed forces in Iraq.

Albania has been home to the People’s Mujahedeen since 2013 after being attacked several times in Iraq and no longer safe there. With the help of the United Nations, the United States and Saudi Arabia, the People’s Mujahedin were flown to the Muslim country in the Western Balkans until 2016. Nothing official is known about the contractual details. Albania is said to have entered into the deal under Washington’s mediation pressure and has received aid in the millions. Previously, Romania was also requested, which rejected the request. Observers in Albania are certain that the political officials have been greased for accommodating themselves. Corruption is common; Albania ranks 106th out of 180 on the corruption perception index.

A serious problem for many Albanians
Martin Patzelt, on the other hand, emphasizes that the reason for the admission is the hospitality of the Albanians. Together with Rita Süssmuth, the CDU politician visited the MEK camp in Albania in 2018. There Patzelt called “to put an end to the religious dictatorship in Iran”. The People’s Mujahideen live in Manza, about thirty kilometers from Tirana. * Inside there is said to be an infirmary, a wood workshop and a computer room.

An Albanian investigative journalist, who does not want to be named, says:

“Nobody in his country accepts a group of people who can commit terrorist attacks. You never know when they will be activated. ”She says that the possibility of getting weapons is not too difficult for MEK, especially in Albania.

There is hardly anyone under 50 among the People’s Mujahideen. Iran’s foreign intelligence agency is still targeting her. In America and Europe they were on the terror list for years. Among the members of the MEK, it is said in Albania, are mainly academics and well-trained engineers and doctors who joined the fighting units of the Iranian resistance decades ago. Their military clout is likely to be manageable. From a political perspective, the group enjoys little support in Iran.

Some observers even say that the People’s Mujahideen are “highly hated” in their homeland. Even Patzelt, a member of the Bundestag, considers the chance of one day toppling the Islamic Republic’s political system to be slim.

For many Albanians, the Iranians are a serious and permanent problem in their country. The presence of the MEK has been causing diplomatic disputes with Tehran for a long time. The Iranian ambassador had to leave the country in December 2018. The Albanian Foreign Minister cited “damage to national security” as the reason. In mid-January 2020, the Balkan state expelled two other diplomats from the country. They are accused of having planned attacks on the MEK and being connected to the killed Iranian General Soleimani. Soleimani led the Quds brigades operating abroad. The US Department of Defense welcomed the expulsion and warned at the same time: “The Iranian regime continues to use diplomatic institutions in Europe and elsewhere as protection, to start terrorist attacks, ”wrote a press spokeswoman on Twitter.
The killing of Soleimani had rated the government in Tirana positively. Albania is a NATO member and is firmly on Washington’s side. There is a George Bush Street in Tirana to testify to the deep friendship. Iran’s spiritual leader Ali Khamenei, on the other hand, recently spoke of a “very small but devilish state in Europe where Americans have made common cause with Iranian traitors”. The People’s Mujahideen are terrorists for the leadership in Tehran. The situation is different for the White House: Donald Trump’s lawyer, Rudy Giuliani, and his former security advisor John Bolton have spoken several times at group events. Giuliani told The Daily Beast earlier this year, “I am one of those who are convinced that there must be regime change in Iran. “For the People’s Mujahedeen, Trump’s election as president was a godsend. However, the prospect of moving to Tehran has not become more realistic since then.