On the afternoon of Friday, October 1, 2020, I learned of a second attempt by collaborator sections of the State Police to illegally expel Mr Ehsan Bidi to Greece. I remind readers that back in August 2020 the same police sections tried to illegally oust Mr Bidi to Greece.

Fortunately, the noise in the media inside and outside Albania as well as the bold intervention of deputy minister Leshaj and MP Gjuzi (Leader of the Albanian Conservative Party) caused these sections of the Albanian police to be disgraced.

The former terrorist and currently stateless old woman Rajavi (of the Manza Iranians) did not remember this failure. She has again ordered her collaborators in the State Police to detain Mr Bidi and forcibly and illegally deport him to Greece. This openly illegal action by the Albanian police and clear complicity with the former terrorist Rajavi is not simply a violation of Mr Bidi’s human rights, but much more than that!

First: Today the collaborators with the former terrorist Rajavi in Albanian police uniform do this to the Iranian Bidi, tomorrow is it any wonder that they can do this to every ethnic Albanian. Appetite comes with eating! Moreover, in key Albanian police positions with the blessing (sadly) of the “tenants” of Renaissance Ridge, we have the sons of bloodthirsty persecutors of the communist era. The English say: Like father like son. With the blessing of the Americans, such cubs of murderers and torturers of the communist era can today wreak havoc on Albanians, as they are trying with Mr Bidi. Personally, I, defending the human rights of Mr Bidi, am defending the human rights of every Albanian living in the territory of the “Republic of the Mojahedin of the Albanian People” of General Sander Leshaj! 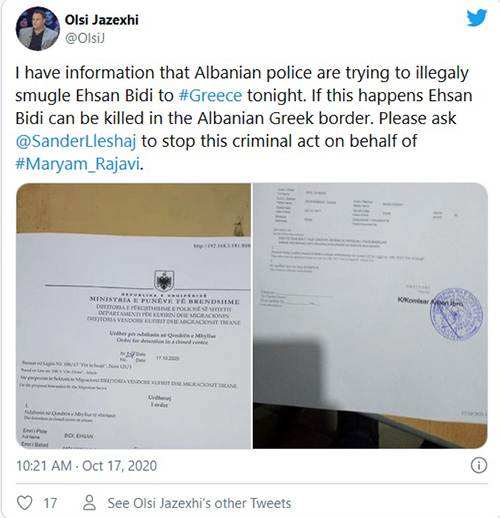 Second: The “hush-hush” deportation of Mr Bidi to Greece not from the PKKK of Kapshtica or even from the Border Crossing Point of the Three Bridges, but from the mountain forest can lead to a serious cross-border incident. According to Greek journalist colleagues, the Greek secret service (EYP) has been informed that in the coming days an Iranian terrorist (Sepah or Pasdaran) will cross the border illegally from Albania to Greece (at Lake Prespa sector opposite the Sarandopor Spa). The terrorist will be armed and very dangerous!!!!

Imagine now the Greek border soldiers, most of them semi-trained, being informed by their CO that an armed Iranian terrorist would attempt to enter Greece from the Albanian border for terrorism. Such soldiers, when the best of them were taken as reinforcements to the Evros River in the Turkish-Greek kfir, for fear that they would be naturally “trigger happy”. In the case of a gun incident it is not simply a matter of injuring or even killing Mr Bidi, but also of an exchange of fire between uniformed Albanian police officers and civilians and the Greek border guards. Both sides will be armed. Greek border guards almost bloated with second rate captains since they have taken the best to Thrace on the Turkish-Greek border, while untrained Albanian police officers, generally great cowards, will face each other. Consequences?!?!?!? We better not write of them at all. 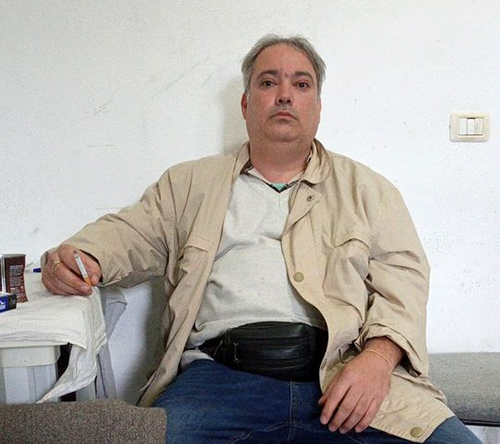 Third: If such an incident occurs, the Greek Minister of Foreign Affairs will at least cancel his expected visit to Tirana. So, we will have a diplomatic swipe at the face of Prime Minister Edwin, currently chairman of the rotating OSCE! So, in order to serve a stateless, homeless witch like Rajavi of the MEK, diplomatic troubles will be created for the Albanian Prime Minister.

Fourth: In the following link we have the indisputable proof that segments of the State Police in Albania have been transformed into “Deputies” sui generis in the service of former terrorists of the Rajavi Cult of MEK (Iranians in Manza). Link:
https://mek-iran.com/2020/10/14/another-iranian-regime-operative-arrested-in-albania/
Albanian police as Deputies of terrorist Rajavi 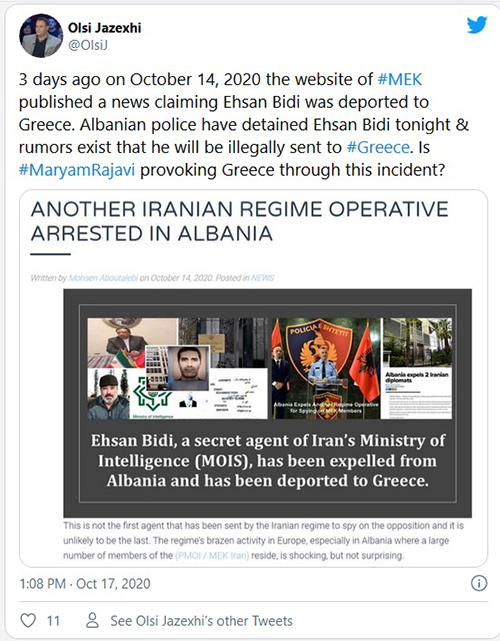 To God’s shame this former terrorist is using these collaborator sections of the Albanian police against the poor defectors of the Rajavi Cult in Albania, almost the same as the Nazis used the “Judische Ghetto Polizei” to efficiently manage the Jewish ghettos!!! I remind Gen. Leshajt and Director Veliu of the State Police that Albania is not a Jewish ghetto ‘managed’ by a group of former terrorists given refuge for humanitarian reasons in my homeland! I remind the above gentlemen that generally the staff of the “Judische Ghetto Polizei” had a bad and painful end! With the utmost kindness I remind Mr Gledis Nano, the director of Albanian counter-terrorism that with these successive mistakes and deeds he will have a similar fate and why not worse than “Shama Grajer” of the Lublin Ghetto, while Mr Veliu and Lleshaj, they look more and more like the Italian collaborators, Nicolo Pollari or Marco Mancini. 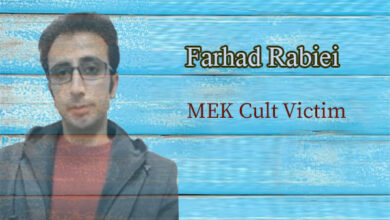 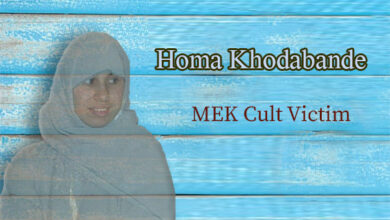 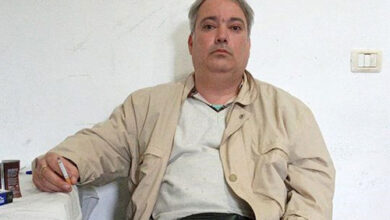